Well, it's finally here.  Well, technically it's not until tomorrow, but the game that's been circled on everyone's calendar since the schedule came out happens tomorrow night.

That's right, Jerry Sloan will face his former team, the Chicago Bulls.  He's 25-18 against his former team for his career in the regular season and we all know how the post-season match-ups have turned out.  Nevertheless, he'll be gunning for his 26th win, and that should be a sight to behold.

Okay, so there's a little something else happening as well.  The Jazz of the east, as they've been come to be known, make their first visit to the ESA since Kyle Korver and Ronnie Brewer signed there as free agents.  Also of note, a certain Carlos Boozer will make his return pending any injuries received while boarding the plane, buckling his seatbelt, biting his tongue (impossible for him), reaching for a rebound during layup drills, or tripping across the foul line.   I just want to hear Boozer say, "I'm going to play, regardless."

Ross Siler has been on fire on twitter.  Last night @tribjazz stated that Deron didn't know why fans gave Boozer so much grief.  Here's the thread: 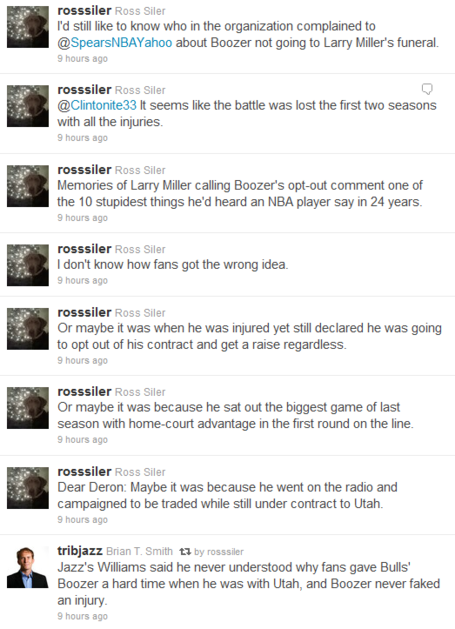 My biggest beef with Boozer was that he never seemed sincere and you could not tell if what he was saying was what he felt or what he thought you wanted to hear.

You'll hear plenty of Boozer new for the next two days.  Here's what I'm the most interested in though - how will Boozer and Millsap match up tomorrow night?  You can compare their stats from this season and cherry-pick for your argument as to who's better.

But when they're on the court, defending each other and going after the same rebounds, who's going to come out on top?  Tomorrow's results won't be the end-all to the Millsap/Boozer comparison, but we actually get to see them go at it.

Both of them will have something to prove.  They might say it's just another game, but that's BS.  Some have said that Millsap has played without that chip on his shoulder this season after becoming the starter.  Well, here's his extra motivation.  You know that he wants this one badly.  Boozer does too.  I would be sickened to see the Bulls walk off the court with a W tomorrow night.

Regardless, know they are in fact boos Boozer and not Booze.

With Brandon Roy reportedly coming back this week, it will be interesting to see how the Blazers incorporate him back into the game plan.  LaMarcus Aldridge has carried them since Roy went down initially.    He's put up about 25 & 10 with Roy sidelined.

Portland was 10-13 with Roy and 18-11 since.  He's having the worst season of his career from the field as most of his numbers are down.  I'm not sure how his coming back is going to help the Blazers.  Throw in the reported conflict with Andre Miller and we could see the team start struggling again.

There's also no way that he doesn't miss any more games this season.  He may be able to finish out the year but he's going to have to take nights off.  The uneven flow of him playing and sitting could cause disruptions.

But he has to play.  He gets paid too much to sit things out.  His contract is now untradeable because of his chronic knee injury that isn't going to get any better.  For a team that will be hovering around the 8th seed most of the season, Roy's play will be a huge factor for them making or missing the playoffs.

Melo to the Lakers?  ESPN is reporting that they've had preliminary talks that would send Bynum to Denver.  I don't know how that that helps LA.  Seems like a panic move on their part.  It also doesn't save Denver any money which has been one of their big wishes.

That also throws an interesting wrinkle into Melo's future.  Does he get wooed sufficiently by the Lakers to stay in LA?  Do the Lakers even want him long-term?  I don't know why they would give Bynum away like that for just a rental when they could probably get much more for him.  If they required Melo to sign a long-term deal with them in order for the trade to happen, would Melo (LaLa) be amicable to that or are they dead set on NYC?

There's likely nothing that comes of it, but it would be a heck of a shakeup in the west.

We're not going to be able to say that all Jeremy Evans can do is dunk anymore.  He's been hitting jumpers and getting big rebounds.  He's also showing great fundamentals running the offense.  Sebastian Pruiti breaks down a play against Denver where he set two very good screen that helped free Deron for the jumper.  Make sure to click through for the full breakdown, but here's the video:

He still needs to be put in with match-ups where he'll be able to succeed, but all he's done is play well with the time he's been given.

I'm not sure how to describe this look from Big Al.  It happened after DWill wiped the sweat off Al's brow during an interview.  It's not the first time that Deron has harassed Al.  (gif ~1.2 MB after the jump)

Here's the quick YouTube video of it as well.