Here is some more facinating insight into how Deron Williams was ultimately traded to the Nets from Sam Amick,

"(O'Connor) called me just to say sorry about (not getting) Melo," King said by phone on Wednesday. "We talked about that, and he made another proposal not including Deron. I countered with something including Deron. He said, let me think about it, then he countered another way, then said, ‘let me talk to the owner and let's talk in the morning.' He calls in the morning and says, ‘we've got a deal.'"

What that tells us is that there was talk between the two about another deal before they spoke about Deron. However, later in the article, O'Connor states that he was waiting for the Melo deal to get done and then he would make his move on the team that lost out on Anthony. When asked how long he had been trying to trade Deron, he said, "I've been looking at it for a while." How long "a while" is, we don't know.

We know that it was O'Connor that initiated the trade discussion. While they initially talked about another player (Billy King revealed that to be Andrei Kirilenko in an earlier interview), O'Connor's goal was to talk about Deron. Perhaps he knew that the Kirilenko talk wouldn't go anywhere and used it as a means to get the trade talk flowing.

Neither King nor Knicks GM Donnie Walsh appeared to have any idea that Deron Williams was available. King was taken back when he jokingly threw out Williams' name and O'Connor didn't tell him no. Walsh mentions in Amick's article that had he known Deron was available, it may have changed things. Williams could very well have ended up in New York.

From this column and more, it appears that it has been a priority for the Jazz to move Deron. Other teams had made offers, but New York and New Jersey were the ones with the best offers. So the question then is: Which trade package would you have preferred? The one we got from New Jersey or this Knicks offering:

The Knicks players definitely would have given us some shooters and a big man. The contracts for those players are very favorable. Chandler's and Felton's deals run out next season while the others have options past that. Derrick Favors' is on a rookie contract of course and Devin Harris is signed through the 2013 season.

Another factor in this is that the Jazz had 13 players at the time. If they would have taken on four players from the Knicks, they would have had to cut at least one player to get to the 15-player roster limit. With a full roster, all of the inbound players would have leaped most of our current bench. Fesenko, Elson, and Price may not have seen the court again. Then again, they haven't seen much of it anyway.

There was risk in trading Deron Williams in his prime but the choice to wait out the Melo trade instead of actively pursuing offers from one of the teams, adds to that. Was it the right choice?

I was prompted from a tweet from @LostTacoVendor to find out if the Jazz are getting less calls from the refs since Sloan has left. I think there are calls that they normally would have gotten had Sloan been there. So I wanted to look at how many foul calls the Jazz have had versus what the other team gets and compare that to the season before Sloan retired. I realize that it doesn't show what calls we should have got, but it might show us something.

So the Jazz have been called for 1 less foul per game and opponents are shooting 1.4 less FTAs per game. Free throw attempts for the Jazz are down 1.2 per game while the number of fouls called on opponents are slightly up.

I don't think that shows much one way or the other. Eleven games isn't a lot compared to the fifty-four before that. It does appear though that it's pretty even.

One thing I noticed though when looking at the splits that's concerning is that the Jazz are giving up 6 more points a game. They're also playing a higher pace resulting in more field goal attempts. The splits (click for bigger)

SLC_Andreas shows how he's taking the Green Team to heart by recycling his Deron Williams poster. The tattoo change is the perfect touch. 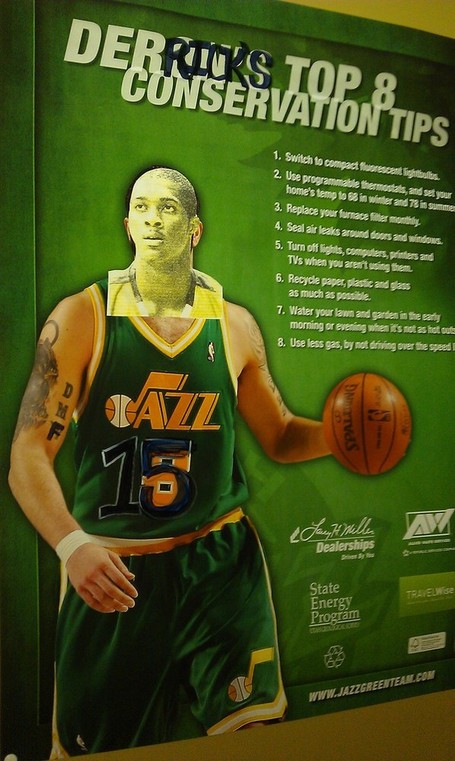