I think the whole Raja Bell situation from Monday's game was a little blown out of proportion. The quickie on this is (cue more Yakety Sax music) that Raja didn't go through shootaround on Monday and so everyone assumed that he wasn't going to play that night. Based on that assumption, Corbin decides to start CJ though Bell hadn't been officially ruled out. In his interview with Locke yesterday, Bell said he told Briggs to tell Corbin that he was going to play. When that happened, Corbin spoke with Bell and told him he was going to stick with CJ. Bell wasn't upset at the switch, he just wanted the talk about the switch to be "a little more in-depth."

[Quickie based on DesNews and Locke interview]

To me it's a Seinfeld-esque episode about nothing. If Corbin was going to be making a change regardless, he should have spoken to Bell before tabbing CJ his starter. It could be that he was planning on having the talk with Bell after Monday's game. So Bell telling Corbin that he was planning on playing caught the coach off-guard. Hence the short discussion.

Bell gave an honest answer and it gets blown up a bit. I don't know what the constraints of the moment were like when Bell and Corbin met, but if Bell wanted a more in-depth discussion about it, he should have asked for one right then.

It sounds like this move was coming anyway only it was exacerbated a bit by the awkward confrontation.

One other thing from the Locke interview that I noticed - Bell seems to worry way too much about his game and his numbers. He said that "I've looked at my numbers. I look at them every night." He wanted to know if they're as bad as he though they were. Once you start thinking about that too much, those thoughts run through your head every time you take a shot.

Also, a guy jumped from the third story of a building and started running away? They didn't delve into that surprise nearly enough.

Morning update from DJJazzyJody is that they're all good now after a more "in-depth" discussion. CJ and Favors will continue to start.

Hayward made the interview rounds yesterday for Subway's "Meatball Madness" where Hayward will buy 5,555 fans a meatball pepperoni sub if a 5-seed wins the NCAA tournament. Since Butler was a 5-seed last year and nearly won it, Hayward is helping promote this. First, that's a pretty good sponsorship for a rookie. Second, given that no 5-seed has ever won the tournament, it's a pretty safe $27k bet. A couple of excerpts:

Dustin (Idaho Falls, ID)
What has surprised you most about your experience in the NBA compared to college?

Gordon Hayward (3:56 PM)
The biggest difference is mentally. It's such an investment. You go where you're the guy and the ball is run through you and you get a lot of shots. To the NBA where everyone was a star and you learn from the sidelines. Mentally, it's been a big adjustment.

LBS: When you got drafted last year going to Utah, they're one of the most stable organizations. They have great fans, one of the best coaches, and a team that's been winning and makes the playoffs almost every single season. All of a sudden in your first year there's changes. Have all of the changes surprised you?

GH: I think with all the changes it just opens up your eyes to the fact that this is a business. You can't look at anybody and say they're not untradeable. It was kind of shocking, especially being a rookie, you're talking to Deron Williams one second and the next he's traded to New Jersey, but it opens your eyes and makes you realize the NBA is a business.

Also, he eats at Subway before almost every game.

There wasn't a WYWS sleeping last night but I watched the second half of Portland/Dallas only have have the Mavs give us the shaft again by not beating teams we need them to beat.

Unfortunately, Portland didn't suck either. Brandon Roy had a great night with a couple of clutch shots and the dagger jumper. They're going to be hard to catch. Aldridge won't win MVP, but he's playing as well as anyone and has carried that team.

Tonight's a big scoreboard-watching night. Besides the Jazz of course, you have the Nuggets @ Hawks and Suns @ Hornets.

I don't know why, but this had me crying. From moni, 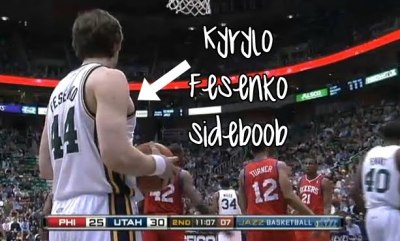