A few seasons ago when the Jazz were beating the Rockets in the first round for the first time, I wrote something along the lines that Tracy McGrady was done. Though Houston hadn't been eliminated yet, you could tell that he didn't have the fight in him any more and had pretty much conceded the series.

I don't believe that all of the Jazz players have that same mentality right now, but it sure seems like the locker room overall has that feeling according to Brian T. Smith's article,

The Jazz’s drop in the standings has been mirrored by an interior fallout. The full-on development of rookies Gordon Hayward, Derrick Favors and Evans is on pause while Utah still has a statistical chance of making the playoffs. But while the Jazz awkwardly balance the present with the future, some players on Utah’s current roster have been left to openly wonder just what the team is playing for with 11 regular-season games to go.

Meanwhile, one under contract in 2011-12 already has acknowledged that his time in Salt Lake City will likely come to an end once a season that has not lived up to expectations is over.

That last statement is the most disconcerting. If you have a guy already thinking that he's going to be gone next season, then what is he playing for? The Jazz have 7 players under contract technically next season with CJ Miles' options yet to be picked up and Jeremy Evans still needing a contract offer. Those are likely to be done after the season.

So of those that have contract through at least 2012, the player that jumped out at me when Clark sent me this link was Raja. Now please don't take this opportunity to turn this into a Bell Bashing Session ™. I'm only guessing at who it is. It could be someone like Jefferson who thinks he won't be here because the team is no longer the team he originally came to.

If we've got one vet checked out, then how does that translate to their play on the court and how does it impact other players?

The moment the Jazz lost Sloan and then traded Deron, it was obvious that the Jazz were switching to re/tool/build/load/ing mode. The playoffs were still a possibility. But like many players have stated, and reiterated in Smith's article, the impact of losing Sloan and Deron has been underrated.

Some new tweets this morning from @tribjazz have painted the players in a better light, but they would likely have to finish the season 10-1 or 9-2. Given the remaining schedule, that would be a Herculean feat, especially if injuries persist.

David Thorpe from ESPN (Insider) posts about how Hayward should study Arron Afflalo's game and Derrick Favors should study non other than Paul Millap,

Considering that Hayward has already made 19 3s, makes more than 40 percent of his 3s and has a PER of 8.44 (close to Afflalo's 8.95 PER in his second season), it's not a leap to think that Hayward can become an Afflalo-type player. He has the agility and length to be an excellent wing defender, once he grows into his body and adds strength.

Favors, who is more athletic than most players in the league, can learn a lot from his new teammate about how to use his physical abilities along with a more crafty game. He does not need to learn everything at once, so starting out with his post game is step one.

Hayward had a poor start to the season but has been playing well the past 2.5 months. I think his skill level as a rookie is better than that of Afflalo's. I think he could have a higher ceiling than him. That said, if he became like Afflalo, I would be happy.

I want Favors most of all to pick up Millsap's outside jumper.

He also didn't have a comparison for Jeremy Evans because there are no current kangaroos in the league.

Courtesy of @SaltCityHoops, I give you the biggest What the...????? 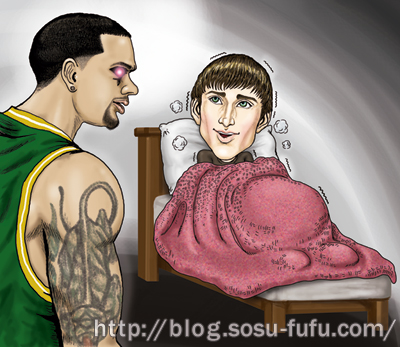 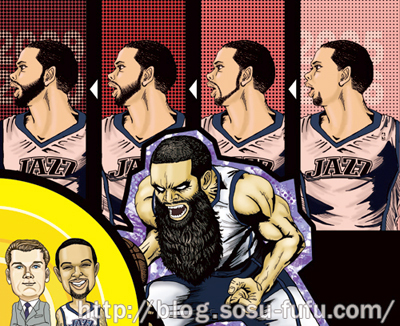 With it being Hayward's 21st BD today, I feel like we should chip in and get him a gift card to some eatery.