There are a lot of great revelations in the NY Daily News' profile of Deron Williams.  He opens up about his family, baptism, and his reconciliation with his father.

Some of life's biggest stresses are moving, getting a new job, and the birth of a new child and Deron is getting all of that at once.  On top of that he's trying to build a relationship with his estranged father.  Now he will be asked repeatedly what he is going to do after next season when he can opt out of the last year of his contract though he's made it clear several times that he doesn't know yet.  This whole thing may have added a couple of years to his life.

If he wants to, he's practically been given the keys to the Nets franchise and will have the chance to help build the team around him.  He mentions in the article that he could never get anyone to come to Utah as a free agent.  I guarantee that he'll have a much easier time getting players to play with him in Brooklyn in the Barclays Center if that's what he wants.

If for nothing else, his stay in NJ/NY, however long that ends up being, he may end up getting his name pronounced right.  It's nice for the media in NY to point out that he's been an Olympic gold medal winner and a two-time All-star and yet it didn't matter to them that it was pronounced right until it mattered to them.

It's a lot easier to market Deron world-wide now that he's in that market.  I've always felt that the Jazz didn't market him enough.  Maybe that's something he didn't want.  It should have started with a media blitz on how to properly pronounce his name.  I'm sure the other media people are given guides on these things, but a campaign such as itsderonnotduron.com or something along those lines would have done wonders.  I also never heard of them campaigning for him for reserve All-star spots like some other teams did.

Best of luck to Deron.  Whatever he wants to do with his career, he'll have everything open to him.

Millsap, Favors, and Jefferson anchoring the front-court?  It's a possibility according to Brian T. Smith from the Trib.  We've had discussions about possibly moving Millsap and his bargain of a contract for an elite wing player.  But what if we're able to land a promising wing in the draft?  How would a lineup of Harris, Miles, Millsap, Favors, and Jefferson be with Hayward, Bell?, Memo, Evans, possibly Kirilenko,  and the high draft pick be coming off the bench?

Jefferson isn't sure that he could play the four anymore but Millsap is open to making the switch to the three.  That would have been crazy to think about before this season, however he's been able to add that outside jumper which has brought a whole new dimension to his game.  He can hit the three in spots, mainly with the Jazz down 8 points and less than 30 seconds in the game, but I don't know if he can do that on a consistent basis nor if he really needs to.

One thing Sap would have to do is trim down a bit and add some speed.  He has the right height for the three of course.  I don't doubt his work ethic and being able to accomplish what he puts his mind to.

What I do doubt is just how much time the Jazz will have to put that lineup together and get them to workout on it.  I don't doubt that we're going to lose some of the coming season.  If it's a repeat of 1999, then training camp will be shortened and that would limit their time to work on this.  That's not saying that they couldn't do it independently of the team though.

One other thing to consider in this, and this goes for the whole team really, is that this is still going to be a very young core of guys.  It may take 3-4 seasons for them to return to a top team again.  They'll be exciting and fun to watch for sure, but when you're counting on 4-5 rookies over the course of three seasons to be major contributors, you're going to have to have patience.

Behind a lot of great players for the Jazz seems to be a great mother.  I'm sure that's true for a lot of great people, not just basketball players.  A lot of those players, and especially recent ones, have been raised by a single mother.  Deron Williams talks about his mother.  Wesley Matthews talked about all of the work his mom did for him.  Paul Millsap was the same.  Jeremy Evans was the same.  Big Al credits his grandmother as well.  They were all also fortunate that they had been given the physical gifts and skills to play a game where they could earn enough money to last them several lifetimes.  That's not to say that they wouldn't be successful if they weren't 6' 8".

Derrick Favors is the latest that credits his mother with helping him become not only the player that he is, but the man that he is today.  From the Tribune,

Even when Favors’ name began showing up big and bold on magazine covers, and everything from his wingspan to his vertical leap were devoured by drooling college scouts, Favors barely blinked. Even as temptation arrived, Favors knew that he had to walk away.

He didn’t have a choice. Deandra was watching. And if Favors let himself down, he would let his mom down, too.

"She just took care of us … and I just tried to stay on the right path," said Favors, who rewarded his mother’s devotion with a house, a move into a safer neighborhood and an ongoing vacation from the working world.

The Jazz have a quality player on the court and a quality man off.

Who had the bigger emotional statement from the Dallas game?  Big Al with his T and subsequent clapping and ejection or Brian T.  Smith? 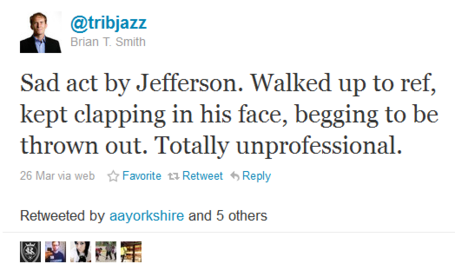 Would Al like to have that one back?  Probably.  I went back and watched it a bunch of times to see what was happening before he got tossed.  He had been jawing with the ref right before that and the official could be heard to say "Don't make me the bad guy."  Al got T'd after that and the clapping is what sent him to an early shower.

However, Al has been one of the most professional guys on the entire team this season.  He was always the hardest on himself and saying how he needed to get better and help the team.  Then, after the two people he was excited to come play with the most were no longer with the team, what did he do?  He stepped up his game and has played his best ball of the season.  He didn't complain.  He kept doing all that he could do and didn't lay down.

So I'm not going to fault Al for blowing up at the end of a game that was already decided.  He in no way bailed on the team.  He's earned his paycheck this season.  He no doubt wanted to get tossed but frankly, I'm surprised it hasn't happened sooner.  We've also seen Millsap blow his top in a game recently.

It's commentary that we don't normally see from Smith during his tweets and certainly not at one player.  Maybe not getting any quotes from Al recently fueled it a bit?

An early congratulations to TazzJazzFan who will likely win the SLC Dunk NCAA Tournament Challenge.  He's in first right now and will win if anyone but UConn wins.  He's got Kentucky winning it all.  There's still a chance someone named Michael Parks could win though should UConn win.  If Butler or VCU pulls it out though, Tazz still wins.  Clark would be close as well if UConn wins as that was his pick as well, but he'd still be a bit short.