One of Greg's recent tweets that most of you are aware of:

I think a lot of fans would like to have a face to face meeting.

The biggest reason for the fan discord is the clear lack of direction with this team. It's isn't the losses. We can take losing, we don't like it, but we can understand it if the team is rebuilding.

Is Greg saying here that we aren't allowed to express displeasure with the team? How exactly are we allowed to be frustrated yet express that in a positive way? If there have been personal attacks, then that's inappropriate, but I didn't see any.

When Sloan stepped down, there was obvious disarray with the team. That was a big blow to the organization to be sure, but the goal then for the team was to still make the playoffs. When Deron Williams was traded though, that's when this team lost its direction. Everyone still talked about playoffs yet this was no longer a playoff team.The 1-2 punch of Sloan and Williams left the team not knowing which way was which.

With the DWill trade, the team made a conscious choice to start over but that wasn't relayed to the fans directly, hence the confusion and frustration. The organization spoke of a playoff-push but at the same time moving towards a youth movement in the long-run. There should have been a clear-cut decision that day to play the rookies and those players that would be part of the future with the team right then.

Now that Jazz fans know what to expect, we can get behind the team and be jerked back and forth.

John Hollinger uses PER to take a look at the worst supporting casts (insider) in the league. Here's his explanation of how he arrives at those numbers,

So I whipped up a "4-12 rating" to measure the quality of a team's roster after the top three players. It's pretty simple: Just take the player efficiency rating of every player not in the top three -- as determined by minutes played -- and multiply by minutes played. Then divide by the total of those minutes. What you end up with is the average PER for "The Help."

The top players for the Jazz in minutes played are Jefferson, Millsap, and Harris. He is using current rosters and also counts full-season minutes for players that have been traded and not just those with their new teams. So where do the Jazz end up in the league? Not good. Here's the bottom 5, 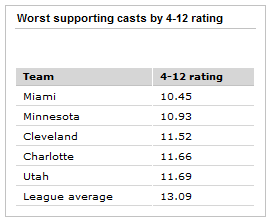 Here are the players that drag that number down based on their low PER and total number of minutes played:

Watson barely cracks a double-digit PER. After that, it's a lot of minutes to single-digit PER players. I don't have a month by month breakdown of PER, but Hayward's has risen quite a bit. I believe he was in the low 5s earlier in the season. I don't know what he would have to be averaging in order to pull that number up.

CJ Miles and AK had decent PERS (15 & 16.6 respectively) and played a lot of minutes. Evans and Favors also have good PERS but don't have as many minutes.

We had players that shouldn't have been playing that much due to coaching decisions and injuries. Had we had healthy players this season, then maybe our rotations aren't relying on those low-PER players.

I'm not going to be happy when the season ends especially since we don't know when we'll see the Jazz play again. At the same time, I can't wait to finally have this season from hell over with. I really think a fresh reboot will do the team and fans some good.

This is why I think we should have a literal Death Blow tournament this summer with the sports radio personalities. From the Trib,

"We can cover sports in the way that we want to," Scott said. "We can be honest."

The implication is that other on-air hosts aren’t as free. Which the staff at ESPN 700 and K-FAN deny.

"I have never once been told what I should say or how to say it," said David Locke, who does both radio play-by-play for the Jazz and hosts a weekday show. He said because of his access to the team, he has "information other people don’t have. And so I’m not flying off the handle the way other people are. Because, frankly, you can’t go as far as a lot of people do in our business without some ignorance."

Clearly, the local sports rivalries go beyond the teams on the field.

All proceeds should go to charity and we all get to see these rivalries compete in both sports and non-sports related events. They all love to pimp their ratings or interviews or whatever. I think this could get the word out on a lot of charities. Now that Deron is gone, we've lost some big events.