No WYWS today, so let's start off with last night's action briefly. The Jazz got some love from Boston as they took out the Suns and the Knicks blew out the Hornets. Portland and Denver won though, keeping their two-game lead on the Jazz.

Unfortunately, the Nuggets are hot and haven't imploded since the Melo trade. In fact, they're 5-1 since then having beaten teams like Memphis (also still hot) and the Celtics. Their lone loss was in OT in Portland.

So starting with tonight's game against Denver, every game becomes must-win. The Jazz are tied 1-1 with the Nuggets on the season having taken one of two on the road. If the Jazz win the next two, they would own any tiebreaker over them. Of course, tiebreakers only matter if you have the same record and the Jazz have 3 1/2 games to make up on the Nuggets.

I have a feeling tonight's game could be in the 120s with the way the offenses of both teams have been running.

Not only are we in a playoff chase, we're also in a lottery race. The Jazz could still get their pick but everyone is looking at just how far the Nets will fall. They're in a pack of about 5 teams (Toronto, Sacramento, Washington, Minnesota) that are vying for the #2 spot behind Cleveland. The Nets are two games up in the standings on everyone but Toronto with whom they're essentially tied.

They play Toronto in London tomorrow night and the next where you're hoping for at least a split. It also looks like Deron will be playing despite having a sore wrist and an injury to his left hand as well.

The Jazz players went around the Wasatch Front reading for schools that had read the most in a month's period.

The kids at Syracuse Arts Academy were the lucky winners though since they were able to land Kyrylo Fesenko as their Jazz player. The book he read to them? "When I Grow Up" by Al Yankovic. Of course he did. This picture is classic.

He was on top of his game as he made several funnies that went well over the heads of the kids. When they opened the floor up to questions, someone asked what his favorite game when he was little to which he replied,

Hide and seek, but for me it was always a challenge.

When asked if he has ever fouled out of a game?

That’s a big problem I have. I like to hurt people.

How this stuff never gets caught on video, I'll never know. He also let it be known that his favorite book is the Wizard of Oz because "[he] read it when [he] was four and nobody made [him]."

At four? Wow. I don't know if it was the original version or a kids version, but impressive nonetheless. Of course he's still and avid reader today and considers it an honor to be able to read to the kids,

I know how important it is for young kids, especially in elementary schools, to read. So if me coming here makes any kind of difference, then it means I did something right in my life.

I might have to check this out. There's a free art exhibit downtown featuring Jazz-themed work at the Blonde Grizzly. Here's one example of stuff that's there. 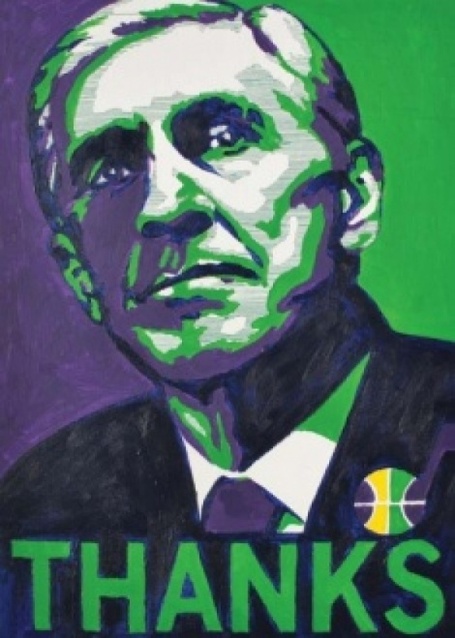 You can also pick up this Jerry t-shirt as well.

Thursday open poll... For the Jazz to make a serious playoff push they have to (and don't say win).....