Kevin O'Connor spoke with Gary Washburn of the Boston Globe about the Deron Williams trade.  He talks about some of the same things that we've heard before about Deron not ever committing to the organization.  While I agree that the trade was a huge risk, I don't think it's fair to compare the trade to what Boston did to get Kevin Garnett and Ray Allen:

I respect Danny Ainge for making a decision on getting Ray Allen and risking [his roster] to get Kevin Garnett.

I think you have to take risks to get rewards; it's contingent. We just felt like this deal was something that was acceptable for the risk/reward.

If he was Billy King, then this example works.  The Nets were the ones trading for the All-star and not the other way around.  The Celtics sent Al Jefferson (a promising prospect), Ryan Gomes, Gerald Green, Theo Ratliff, Sebastian Telfair, and a first-round draft pick (Johnny Flynn) to Minnesota for Garnett.

Then they picked up Ray Allen from the Supersonics for Jeff Green, Wally Szczebiak, Delonte West, and a first-rounder (Trent Plaisted).  Boston did all of that while hanging on to Rajon Rondo, Kendrick Perkins, and Paul Pierce.

In the 2007 season, the Celtics were the second-worst team in the league and had just lost out on the Oden/Durant sweepstakes.  They went from potentially winning the lottery to falling to the fifth spot.

So while they gave up a lot of players, I don't think that gaining two Hall of Famers was much of a risk.  Even if that didn't work out, they were going to be much better off than they had been the previous seasons.  They're now in the fourth season with those players and have been true title contenders every season.

I'll stand by my tweet that this trade for the Jazz will be either the best ever or the worst.  There won't be any middle ground for this one.  I do give him credit though for not using the small market excuse.

Gordon Hayward is apparently too big yo for any dining at any real restaurants while in New York City.  His tweets show the struggles of a young NBA rookie in the big city as he and Jeremy Evans  try to get something to eat, 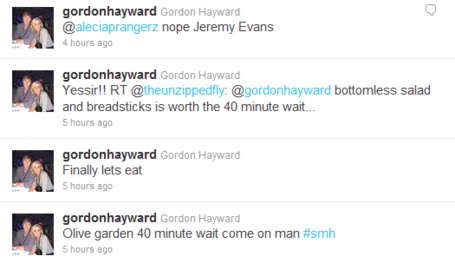 You know, there just aren't enough Olive Gardens in Utah.  They only dot the land as frequently as LDS meetinghouses.    This is actually a pretty typical rookie mistake.  He didn't have to wait 40 minutes at Olive Garden had he not been obsessed with endless salad and bread sticks.

If he would have turned around and looked up the street a little bit, he would have seen the finest in New York cuisine, McDonalds.

If you look at those maps, you'll also see that the Institute of Culinary Education is just a block up.  I guess there must be opposition in all things.

Kurt Kragthorpe from the Tribune on Ty Corbin becoming the first black coach of the Utah Jazz,

The distinction of Corbin's becoming the first black head coach of the Jazz's Utah era has not been a major story for a variety of reasons, including the focus on Sloan's departure and the subsequent trade of Deron Williams.

Beyond that, there was a sense that Utah has moved past the point where such a development would seem revolutionary.

Jazz guard Ronnie Price marveled at how Corbin's replacement of Sloan was treated as "just a normal thing."

Yet Corbin's ascension to the most visible position in Utah sports is highly meaningful to many members of the black community - and to me. As a 40-year resident of Utah, I want outsiders to view the state as becoming more diverse and welcoming than they may believe.

While Sloan's resignation was a much bigger story and shock than this, Corbin's race was the furthest thing from my mind when he was named head coach.  It didn't even cross my mind until Thurl Bailey brought it up during the press conference.

The Jazz were one of the last teams in the NBA that hadn't had a black coach.  That's bound to happen to an extent when the previous coach, who happens to be white, led the team for nearly 72% of its existence in Utah.

There was no barrier for Corbin to become a head coach with the Jazz because of his race.  He was and is the best man for the job.

I've been in Utah for most of my life, so it would be interesting to see how the rest of the country/world perceives this.  Is Utah considered so backwards as this would be considered big news?  Does it change the perception of Utah that much?

Jody Genessy does all of the work for all you would-be Devin Harris stalkers.

Are naps the secret to Raja Bell's streakiness?  The New York Times looks into the NBA siesta.  Almost every Jazz player takes one.  Raja does, but also has an extra secret:

When Raja Bell of the Utah Jazz wakes up, he drinks coffee to try to bypass the drowsy feeling some feel right after waking up. (After talking extensively about naps for this article, he said, he had trouble napping the next day.

The first rule of nap club is that you don't talk about nap club.

He's also looked into hardcore items like strawberry Bubblicious in an effort to get him going.