For All Your Unbelievable Functions

Share All sharing options for: For All Your Unbelievable Functions

I've been working on some t-shirts for a while and I'm finally getting around to putting some of them out. I've had this one in the works for a bit, but with Karl Malone's Unbelievable Function quote, now's the time to get it out. I'll have others coming including another version of this one where it's just like the tux t-shirts and it will take up the whole shirt. In case you're not aware where this comes from, it's from Malone's first unbelievable function, his draft day suit.

I'll also have some other SLC Dunk-relates shirts coming out as I work on them. Enjoy.

[Note by Basketball John, 03/09/11 3:53 PM MST ] Hold off on buying. I'm going to put one up with Unbelievable Function on it as well as fix something I noticed on the shirt. 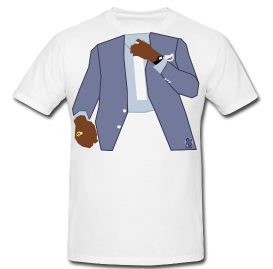