You have to like this quote from Devin Harris on coming back to finish out the season.  From Jim Burton at the Standard-Examiner:

[Deron] Williams recently underwent season-ending surgery on his wrist. Harris, too, was looking at the prospect of shutting down for the rest of the season, but decided to come back and play out the remainder of the season.

"I haven't been here that long and I think every game is important," he said. "Especially for the guys we have and the nucleus we're trying to build on. I think it's important to get as many games as we can to work on what we need to work on and (figure out) how to come back next year."

That attitude carried over over to the court where he was literally all over the place against the Spurs.  He was diving for loose balls on and off the court.  With no regard for human life (click through for the .gif from mocksession) 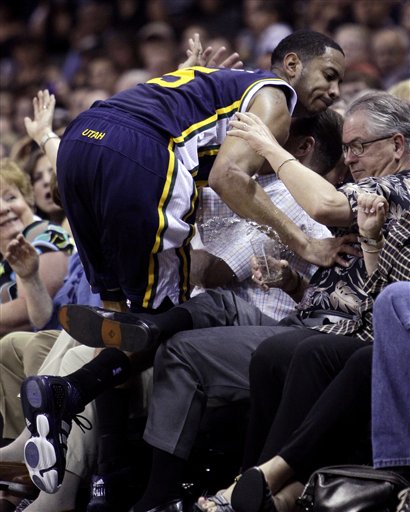 Fans sitting on the front row tonight in New Orleans may want to be on alert.

A great post from Hoopism.com that features the jerseys of all 154 participants in the NBA Slam Dunk contest (they're also selling prints).  Don't worry, there's no KIA logo anywhere. 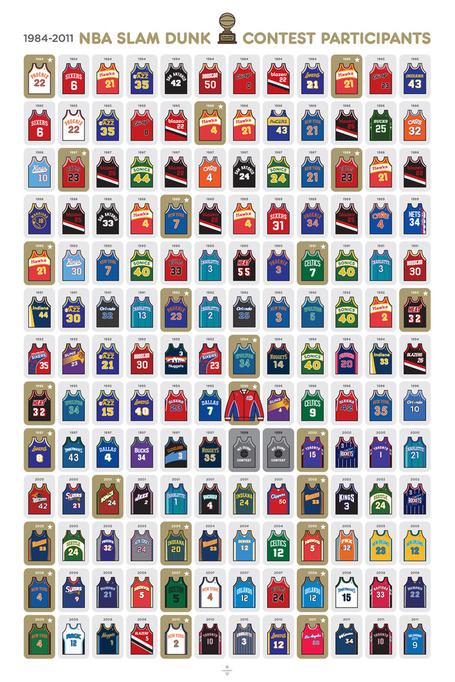 The Jazz have participated in the contest only 6 times with 5 players competing: Darrell Griffith (2X), Blue Edwards, David Benoit (1993 All-star game in Utah),  Jamie Watson, and DeShawn Stevenson (2001).  Both Watson and Stevenson made it into the finals with Watson having a poor dunk and Stevenson just missed beating Desmond Mason.

Stevenson was sans Lincoln neck-tattoo then.  It's been too long since a Jazz man has had a shot. We've certainly had players that might have given us a show.  Evans might be the best bet going forward.  Following the recent trend of big men, Derrick Favors might have a dunk or two.  I also wonder if Hayward could be a dark horse in a competition.

Karl Malone has another boy going into football.  No, not that one, one that he actually acknowledges, Karl Malone Jr.

Remember, this advice from the Mailman was for football, and not basketball, at least I don't think:

"Just hit the guy next to you," said Malone Sr., known for his physical play as a power forward. "Forget the technique. Hit the guy across from you. Don't let somebody come in your space."

Favors with some of Al's post moves?  Yes, please.  From Jody Genessy,

When told at practice Sunday how Jefferson said he might need a few lessons from him, the shy and polite Favors cracked a slight grin.

"I don't know," said Favors, whose next student-teacher session will take place tonight against the New Orleans Hornets. "He got a lot of stuff in his post game that I would like to learn."

The Jazz don't have the best track record when it comes to developing big men.  The difference with Favors though is that his talent is already literally (yes literally) 15 light-years ahead of previous big man projects.  You can put it this way: With previous picks (Fess, Kosta, Borchardt, etc.), the Jazz have had to teach them and try to build them up.  With Favors?  Don't screw it up.  He's already got the skills.  Please don't wreck him.

Let me make this clear one more time.  If Favors does not become an All-star and contender for All-NBA teams, then The Trade will be a huge disaster.