Dun, dun, dun...  Another one bites the dust.  Harrison Barnes is now officially out of the pool,

"Opportunities, both beneficial and life changing, can seem to make the next phase of my journey an easy decision," Barnes said in a statement. "But I am a student-athlete at the University of North Carolina. I'm here to experience college life, grow as a person, receive a quality education, and be part of the greatest basketball family in college sports."

At this point, do we even have enough players in the draft to complete two rounds?  Should I declare to save the league embarrassment of having to stop the draft at the 40th pick?  I might even be able to work myself into the green room at this point.

Thought I would like to believe that all of these players are returning for the good of their education, it appears that the impending lockout is affecting their choices about coming out early.  Make no mistake, theses lotto-type players aren't in school for the education.  Their job is basketball going forward.

I agree with Tom Ziller that the top players are going to land in some money regardless of the labor situation.  Their agents will take care of them.  It's not going to be as much as they would get up-front but they're not going to be eating ramen.

They could also be getting less money next season.  The 2012 draft gets that much deeper with each returning player.  That means though that a player like Barnes that could have easily gone in the top 3 or 5 this season could get picked later.  Of course he could improve his stock and go #1; that's the gamble that he's taking.  The rookie salary scale for next year's draft is going to be the same as this one though and fall under the same CBA.

It still doesn't seem like it's worth the risk dropping in the draft or getting injured.  I feel like there's more we don't know about that's keeping these top players from entering.

What this means for the Jazz of course is that another quality wing comes off the board.  And unless the Jazz win the lottery and land Kyrie Irving or Derrick Williams, they're not likely to land a franchise-type player.

Seeing TNT's latest gone fishing for the Utah Jazz should come as no surprise.  From The No Look Pass, 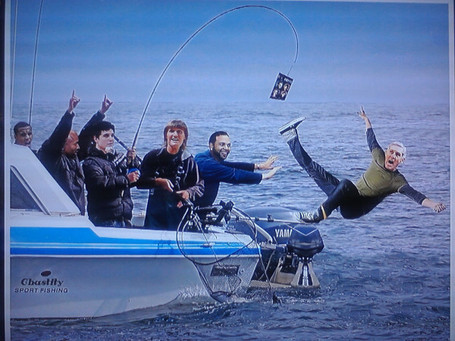 Cold and inaccurate.  I couldn't tell what movie/book Jimmer has on his line.  And who's that in the back?  I say it should be no surprise because they also did this one from a couple of years ago, 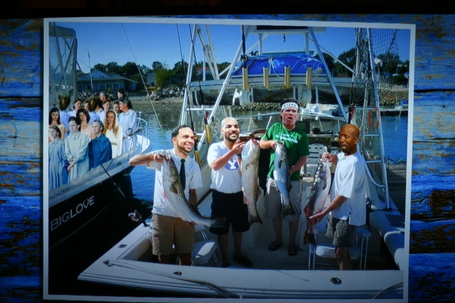 moni one-upped them by quite a bit though with her own rendition that year.  Maybe we'll get another?

moni has the transcript.

I realize that most people's minds are made up when it comes to Kirilenko.  You either love him or think he's been the biggest underachiever the team has ever known.  I don't think we're going to change anyone's minds at this point.  Yet the notion that he should somehow repay everything he has earned with the Jazz in order to return to the team as some fans have suggested is ridiculous.  It's also ridiculous to say that he should play for the league's minimum in order to return to the team as Kurt Kragthorpe recommends is equally so,

So as Kirilenko and the Jazz determine whether to extend their 10-year relationship, here's my solution: A.K. should play for free.

Seriously, how refreshing would that be?

Asked about his free-agent priorities, Kirilenko said, "I'm definitely not going to look for the money. I think I've got enough."

The National Basketball Players Association probably would not endorse pro bono work. But what if Kirilenko signed with the Jazz for $1.4 million, a 10-year veteran's minimum salary? That would further endear him to fans who so easily forgive him for missing games at a rate approaching Carlos Boozer's, and, in essence, pay back some of the $86 million the Jazz largely wasted on him these past six seasons.

That's weird, I don't remember a Kragthorpe article asking Carlos Boozer to re-sign with the Jazz and play for free or the veteran's minimum.

The fact remains that it was the Jazz who gave that contract to AK.  And as noted in Kragthorpe's article (as told to David Locke by AK), Andrei went to Larry H Miller and offered to have the contract voided and to let him and the team part ways.  Yet Miller insisted that they still wanted AK and with him his contract.  I'm not sure what more you would want AK to do.

In the interview with KSL, AK stated that he's willing to play for less for the Jazz.  That doesn't mean he should play for the minimum.  Under the current CBA, he would probably get around $7-9M a year.   I personally think he's going to find that there's a lot more interest in him this season than he believes.  It will start with New Jersey and there will probably be no less than 1/2 dozen other teams that will pursue him.  He may even get a Godfather-type offer where he can once again have a more prominent role on a team and get paid.

It will be interesting to see who emerges as a leader for the Jazz next season.  I'm a big fan of a leader who isn't self-appointed.  A leader on the basketball court is one that does it on the court with his play and not because he's the highest-paid player or the most vocal player.  Leaders make everyone else better and other players are drawn to what they do.  I also think that it can be a different person for each game.

The Jazz missed Deron as a closer after The Trade.  He was also no doubt the leader of the team.  That doesn't mean that the the two roles are inclusive.

I would like to see Corbin be the leader of the team though.  He should be the one that should be motivating and leading this team.  If there's one thing that I thought Sloan could have done was to be more of a motivator.  It seems ridiculous to say, but sometimes just making millions isn't enough.  Money is a big motivation factor in any job, but as most 9-5ers know, sometimes it takes a lot more to get motivated.  I thought we saw a lot of Sloan the motivator in the 2004 season.  That was a large part of why they were able to win so many games when they weren't supposed to crack double-digit wins.