Whaaaaaaaaa?  Jerry Sloan sold all of his tractors?  From Yahoo! Sports,

He would tinker with them, move them from here to there with help from his buddies, shine them and dirty them and shine them some more, use them not so much to plow and till as to pass the days until it was time for tipoff yet again.
And now they're gone, all 60-plus.

"I sold all my tractors,'' Jerry Sloan said, explaining how he spent much of 18 March days, a stretch that included his 69th birthday, back home in McLeansboro.

"I tried to piddle with the tractors, but I got tired of them,'' Sloan said. "They take a lot of time and lot of effort.

First he retires mid-season, then he sheds tears at his press conference, and now he gives up his tractors?  First, I knew he had a lot of tractors, but 60?  Maybe they were his personal type of swear jar, purchasing one for each player he put in his dog house.  I wonder how many of them had names.  Ostertag.  Giricek.  CJ.  Amaechi. Deron?

If that were really the case, then I guess getting rid of them would make sense.

The next thing you're going to tell me is that they're breaking up Stockton to Malone.

Whaaaaaaaaa?  They're breaking up Stockton to Malone?????  So it's just a "minor" name change to the Stockton to Malone dealership after Stockton bought out Malone's 50% share in the company.  The new name is now simply Stockton #12.  Karl Malone Toyota still sets next door.

First, that's not a minor name change.  If I were the dealership, even if Karl Malone wanted out, I would have found another Malone somewhere and given them a .01% ownership in the company and kept the name.  They could have put really small type in front of Malone that says Rick or something like that.  Car dealers are experts at small print.

Next up I hear they're breaking up peanut butter and jelly. 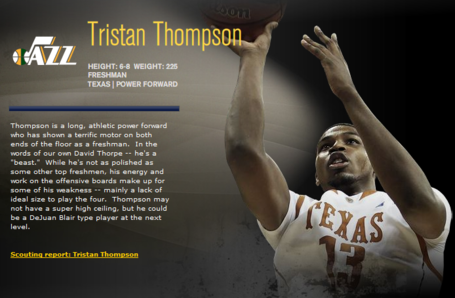 I don't see how a 6' 8" power forward is what the Jazz need given our deluge of current PFs.

The Jazz season in haiku by moni.  My favorite,

Clarkpojo joins Clintonite33, Kevin Ferguson, and The Upset Blog at the Utah Jazz Blog to discuss all things draft.