Those that follow the NFL know that Judge Susan Nelson delivered a blow to the owners by ruling that the league's lockout was illegal.  The NFL Player's Association de-certified in order to sue the league.  The impact on the NBA of course is that we could see the same thing happen.  It effectively wipes out the lockout as a tool used by the league.

According to CBSSports.com, the NBA Players' Union has enough votes to decertify as well should it come to that:

Top officials with the NBA and NBPA were reading every word of Nelson's opinion Monday, but the upshot for the NBA's labor negotiation was clear and resounding: If the NBPA elects to decertify -- in effect, dissolving the union and forfeiting the ability to collectively bargain contracts and work rules -- then Nelson's ruling will stand as federal precedent rendering moot the NBA's presumed tactic of imposing a lockout. The NBA's collective bargaining agreement expires at 12:01 a.m. on July 1.

Derek Fisher, the player president of the NBPA, says that decertification is an option, but that they hope it doesn't come to that,

Our goal is to get a deal done and not to have to decertify and go into court situations to drag the process out. NBA basketball has never been better. There's no reason for us to consciously do anything to take that away from the most important group of people, which is our fans. They're the ones that are investing their time and their resources, their money, in the most troubling economic times of just about all of our lifetimes. This game is still growing in that environment. We have a responsibility to them to try to get something figured out.

Here they are, they're profitable, but their future somehow is involved in some combination of court cases and NLRB proceedings. On behalf of the NBA -- and I believe, Billy, on behalf of the union -- (we) understand that's a route that should be avoided.

However, Michael McCann from SI.com states that the NBA is in a different position than the NFL:

For one, the NFL's legal argument has been hampered by the fact that not one NFL team can show that it is losing money. The inability of a team to do so suggests that enjoining the NFL lockout would not force an NFL team to lose money. The NBA, in contrast, asserts that 22 of its 30 teams will lose money in the 2010-11 season, and the league is willing to open the books to prove it. A court decision to lift a lockout instituted by the NBA would therefore subject NBA teams to losing money in the 2011-12 season. Such a consequence could motivate a judge reviewing an NBA lockout to be less willing than Judge Nelson to lift the lockout.

Second, irreparable harm may be more difficult for NBA players to show, since unlike NFL players who can play nowhere else and earn an NFL-quality income, some NBA players would be able to secure lucrative contracts in Europe and elsewhere during a lockout. If NBA players can't show irreparable harm, they would not be able to convince a judge to enjoin an NBA lockout.

Third, Judge Nelson's decision would not bind a court that reviews the NBA lockout. In fact, it is likely that such a court would be in New York, where both the NBA and NBPA are located. The NFL and NFLPA are litigating the lockout in Minnesota because the parties choose to do so in their collective bargaining agreement.

The Jazz apparently are one of those teams that lost money this season.  From Brian T. Smith's article about the Jazz brain trust, we learn this (emphasis mine):

Miller, the Jazz's chief executive officer, spent more than 30 minutes during an afternoon in early April calmly and quietly discussing Utah's disappointing 2010-11 season. Nestled high inside a spacious office building in Sandy, Miller recounted how the organization underachieved, losing money and failing to qualify for the postseason for the first time in five years.

If that's the case, then this will be the second year in a row that the Jazz have been in the red following the season.  Forbes estimated that the Jazz lost nearly $4M last season after being luxury tax payers for the first time in team history despite recognizing record revenue.  Increasing players' salaries are the biggest reasons given by owners for these losses.  The players contend that it's forms of Hollywood bookkeeping though that is making it look like the league is losing money despite record revenue and TV ratings.

I'll never understand the owners crying about players' salaries when they're the ones giving large and lengthy contracts to the players.  I can see both sides though.  If an owner gives a player a max contract, they should expect to see max results for the large majority of that deal.  On the other hand, I see that as part of the risk of being competitive in the NBA.  If the owner or GM or whoever gives out contracts to under-performing players or players with a long history of injuries, shouldn't their team be hampered for a bit?

Isn't that part of the game?  GMs are continually trying to get the most value for the team's buck and out-maneuvering other GMs.  That's part of what makes the league competitive and why they have an award for Executive of the Year.  Where's the risk in signing Gilbert Arenas to a $100M dollar deal if you can just cut him a couple of seasons into his contract?  There should be some penalty for making bone-headed decisions.

There's no clear-cut winner.  Both sides have valid points and arguments.  As fans, we can only hope they come to an agreement soon. 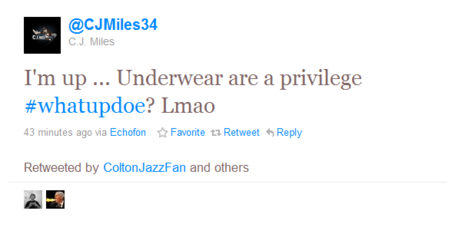 Not a right, but a privilege.  #underwearareaprivilege doesn't quite have the same ring to it as #whatupdoe.  And yes, this is the kind of stuff you get in off-season Downbeats.

G Time will be helping a small town in Indiana try to capitalize on the 2012 Super Bowl that will be held in Indianapolis.  The Zionsville Town Council is helping fund the Z Bowl to help lure those Super Bowl dollars to their town.

That in and of itself isn't that interesting but the way Hayward will be helping is.  He's going to be a celebrity waiter, entertaining tables and hoping to raise money for the town's efforts:

"We want patrons to ask the celebrities to do funky stuff such as sing a song," [Kathy Wood] said. "The celebrities will not be serving food. They will just be there to entertain the guests."

There will also be a competition amongst the waiters and whoever wins the most tips at the end of the evening will be crowned king or queen of the waiters, she said.

Along with the ticket price of $100 per person or $750 for a table of eight, there will be a silent auction, a live auction and games including a dunk tank, dancing and a tricycle race.

Oh, and you'll get a lot of polls in off-season Downbeats.  If I could have 5 polls, I would probably do an all-poll DB.  Tuesday open poll...  If you had to put real money down on who the starting PF is going to be on opening night next season, who would it be and why?  You can even assume that the Jazz somehow luck into Derrick Williams.