Share All sharing options for: Jerry Sloan Cares Not For Your Fancy Three-point Shooting Team - The Downbeat - #478

I mentioned this before, but expect Sloan's name to come up a lot as coaching vacancies spring up around the league.  This is the first case that I've heard his name associated with an opening.  Marcus Thompson, a beat writer from the Bay Area News Group tweeted this (via j.e. skeets)

This of course comes because the Warriors decided they're not bringing back Keith Smart.  Thompson later stated that Sloan is a "pipedream."  He's not the only name on their list, but he will be on a lot of lists.

He hasn't come out yet and said that he's looking to coach again, nor will he, but he wouldn't be retired for long if that was his intent.  The situation would have to be ideal for him to take over and I don't think the team that Golden State has now is that team.  The biggest reason is that they're built to be a three-point shooting team with Dorell Wright, Monta Ellis, Stephen Curry, and Reggie Williams.  They shoot a lot.  They do have some makers though so Sloan would like that.  But a Sloan system would cut into those 3PAs.  They do have a good PF in David Lee and a decent defender in Andris Biedrins and recently-drafted Ekpe Udoh.

They're still very young overall and it would take a few years and a few changes to get them contending.  Sloan could probably do it but I don't know if he wants a (re?)building project.  I could only see him going to a team with established vets and a good recent track record.

Overall, I still think he stays retired.  It would have to be a Godfather-type offer to pry him out of retirement.  And again, a team would likely have to convince Phil Johnson to come back as well.

One more thing to consider would be how would the team take to a dramatic change to the offense they're running now?  They would likely continue to score at a good rate.  I would be most worried about Ellis and Sloan confrontations after numerous ill-advised shots.  Ellis would be dog house candidate #1.

This article from the New York Post about Deron Williams provokes a couple of thoughts though neither are about Deron.  There's nothing new there other than Billy King expects Deron to re-up with the Nets and DWill was touring the new arena.

In there though King talks about there goals for next season (making the playoffs) and how having a healthy Deron back and how players need to arrive in shape for training camp.  Being in shape is something we heard from Sloan and the Jazz staff all the time.  He did drop this nugget on Devin Harris though,

"We had a lot of guys that came in out of shape," King said. "Devin [Harris] didn't come in his best shape, Travis [Outlaw] didn't, Johan Petro; and a lot of these guys admitted it in our individual meetings. That's the start.

So one, is this something that we should be concerned about with Harris?  And two, if there is a lockout and the start of the season is postponed into January or so, how will that affect other players' conditioning?  Even if the players get together in September and resume their own training, you don't get the same kind of conditioning as you would for training camp.

The interesting thing about this photo of CJ (from his twitter account) is that in this picture, he's closer to being drafted (four years) than he is removed from being drafted (five years). 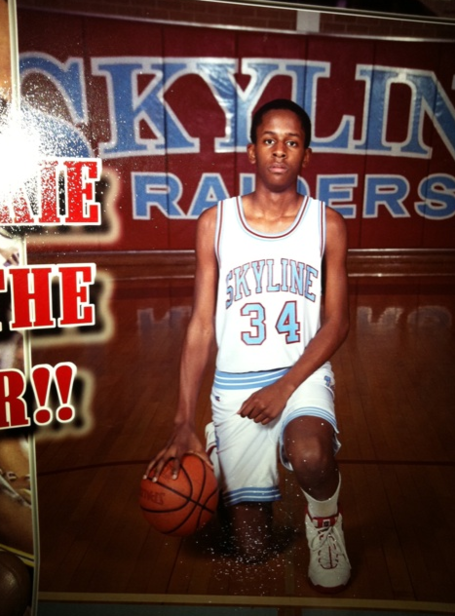 Salt City Hoops has a good podcast with Kurt Kragthorpe from the Trib.

Kidding.  Let's go with this one...  If you're having to start a new team around just one player from the Jazz, who would it be?