Jerry Sloan returning to the sidelines?  From the Star-Tribune (via Sam Amick),

Sloan would listen if another team approached him, according to a source who has spoken to Sloan recently, and would seriously consider the right situation. But he won't actively seek another job or have anyone campaign for him.

As much as it killed me to see Deron in any other uniform other than the Jazz, seeing Sloan coaching another team would be more painful.  He's never said that he would never coach again.

It really would have to be the perfect storm for him to coach again though I believe.  He'd have to have the right players, the right team, and ownership and management that backed him.

One of the main reasons he stepped down was that he was just worn out from coaching and didn't feel that he could go on with it.  Perhaps 6-8 months would rejuvenate him a bit and give him a second wind.

There will likely be teams that go after him though.  He stated that he doesn't want his name to come up every time there's an opening.  But unless he comes out and states that he's done with coaching forever, his name is always going to be mentioned.

I guess congratulations are in order for Larry Krsytkowiak who was named the new head coach for the University of Utah.  He's not even following a successful coach and he's getting killed already.  The Utes were turned down by a few men.  It sounds like Special K was plan D or so.  His chances were also buoyed because Chris Hill thought he was getting the other Coach K, Mike Krzyzewski.

Krsytkowiak came to the Jazz for one season along with Jay Humphries when the Jazz sent Blue Edwards and Eric Murdock to the Bucks.  Does anyone remember why that trade was made?  Was it to bring in another aging vet backup PG for Stockton?  Was that the first aging vet backup PG?

That trade sucked because I loved Theodore at the time.  Murdock went on to be a pretty good PG while Humphries blew while he was with the Jazz.

Good luck to Special K.  No doubt Pace Mannion will be his successor.

Time to bone up on your NBA lottery knowledge.  Right now the Jazz have the #6 and #12 picks coming up.  The team could move up to #5 if Toronto keeps winning and New Jersey keeps losing.  There's also a chance that the Jazz's own pick moves up to #11 if the Jazz lose out and Golden State wins.

Wikipedia has a nice breakdown on how it works.  Here's the short of it:  Fourteen balls labeled 1-14 are put into a lottery machine and four balls are randomly selected from the lot.  Each team is given a certain number of combinations.  For example, the Jazz with #6 and #12 picks will have 63 and 7 combinations (out of 1,001) respectively.  If the Raptors were able to overtake the Nets in the standings, the Jazz would get 88 combinations.  The order of the numbers does not matter.  1,2,3,4 is the same as 3,2,1,4.

The balls are drawn three times for the first three picks.  The winning teams are identified each time and the balls are returned to the machine for each drawing.  Once those three picks are done, the rest of the teams are ordered according to standings in reverse order.

While this weighted system gives the worst team in the league the best chance at winning (25% or 250 combinations), the field still has a 75% chance of getting a lotto pick.  Since 1990, only 3 of the worst teams in the league have received the top pick.

If a team moves up in the lottery, another team has to fall.  While the Jazz could move into the top 3 of the draft, they could also fall all the way back to 9th if they hang on to the 6th spot.  For that to happen, three teams behind them would have to win the top 3 spots.  There's a 30% chance they could fall to 7th, a 4% chance that they fall to 8th, and just a tenth of a percent of falling to 9th.  They have a better shot at winning the #1 pick than they do falling to 8th though.

May 17th is when it all goes down.

SB Nation is taking over the internets and scooping up all your youtubes:

Team From Engadget Makes Jump to SB Nation - NYTimes.com
Like many of its peers covering Silicon Valley, Engadget worked as a kind of permanent start-up, with 16-hour days to compete in the always-on news cycle, but AOL treated it as one more niche site. “We have been working on blogging technology that was developed in 2003, we haven’t made a hire since I started running the site, and I thought we could be more successful elsewhere,” said Joshua Topolsky, who was the editor of Engadget until the middle of last month.

So Mr. Topolsky and as many as eight of the more prominent editorial and technology staff members at Engadget have left or are leaving AOL and are about to build a new gadget site by joining forces with, yes, you guessed right, their old friend Mr. Bankoff, who now runs a federation of sports sites called SB Nation.

Caption contest from the Lakers game (via @jose3030): 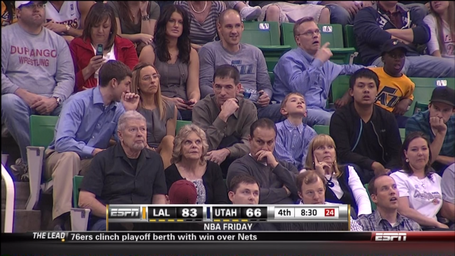