Will The New NBA CBA End Small-Market Creativity? - The Downbeat - #490

Share All sharing options for: Will The New NBA CBA End Small-Market Creativity? - The Downbeat -  #490

While we don't know what the next CBA will entail, you have to wonder if the days of the shrewd moves and "genius" GMs will come to an end.  The owners are hell-bent on saving themselves from themselves by transforming the CBA into a hard salary cap system with no guaranteed contracts.

Instead of being held responsible to a degree for giving out $120M deals to players that shouldn't be earning half that, they want to be able to dump players that aren't living up to their deals.  That's fine except that there aren't many players that should be making that much yet teams continue to dole them out like candy.

Brian T. Smith writes about how small-market teams like the Jazz can hope to compete in this market.  The obvious examples that come up are OKC and Memphis.  The Thunder have had a perfect storm (pun slightly intended) of events happen that has put them where they are today.  From Smith,

Before relocating to Oklahoma City in 2008, the then Seattle-based franchise bottomed out with a 20-62 record in 2007-08. Two years later, the Thunder posted 50 victories. Today, Oklahoma City has eclipsed Utah and features two of the top young talents in the league in Durant and Russell Westbrook. Luck, timing and trades aided the Thunder.

But all three pale when compared to the organization's success in the draft. Durant, Westbrook, James Harden and Serge Ibaka were originally acquired by OKC, and they provide the franchise with more long-term potential than a single high-priced free agent ever could.

They lucked out and won the second spot in the 2007 lottery with just a 9.7% chance.  They also had the fortune of Portland taking Greg Oden and leaving them with Durant.  Hindsight is 20/20 of course.  Not only has Durant turned into an All-star and MVP candidate but they landed a man who didn't feel the need to test the open market and signed a long-term deal with OKC.

There has also been some brilliant strategy by the team.  A lot of their players are on rookie deals or low-end contracts.  Even when Russell Westbrook gets his max deal, it won't kick in until the 2014 season.  The other core players like Maynor, Ibaka, Harden, and Sefolosha won't get raises until 2015.

They also went ahead and gave Nick Collison $13M this season and then will pay him a diminishing annual salary starting at $3.2 per for the next 5 years.  They got creative and used their extra cap space this season by paying him a max bonus up front, allowing them to get him on the cheap for years to come.

And as Jazz fans unfortunately know, the Thunder were able to snag Maynor because they had ample cap space to take on Harpring's expiring contract for a luxury-tax paying Utah team.

They should have their core group of players for at least 3-4 season after this one.  They'll also have some young guys they could dangle should they need to pick up another piece.  With the way they're playing now though, they may not need anyone else.

With the new CBA though, a lot of the creativity goes away.  There will be other opportunities I'm sure to work the system, but I don't think we'll see small market teams like OKC and Memphis build teams like they have.

The Jazz stunk defensively this season and you don't need to look at advanced stats to know that.  However, when you do look at them, yikes.

Kim Kawakami from the Mercury Newslists his All No-defense team and lists three Jazz players.  Right at the top is Al Jefferson,

Can't tell you how many times I was watching a Utah game, saw the Jazz give up an easy bucket in the half-court, and figured out it was Jefferson who turned his head at the wrong time or just decided to leave the weak side totally unprotected.

Ouch.  The actual numbers might be a little worse.  Devin Harris also shows up on the list as well as Gordon Hayward for no-defense rookie of the year.  As with all of Hayward's rookie season, he didn't play well to start the season but played exceptionally well on both sides down the stretch.  He must have missed the Lakers game.

If Jefferson is still here next season, they're going to have to figure out a way to hide him on D.

Thanks to Chris Larsen for this tip

Malone signing autographs in Houston though a Skechers promotion.  We don't see his feet though, I wonder if he's got them on?  Maybe these Shape-ups are meant to counter the new In N Out Burgers in Texas? 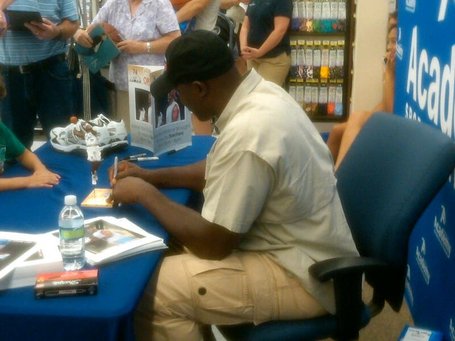 So this pretty much solidifies Hayward's nickname as Flash, 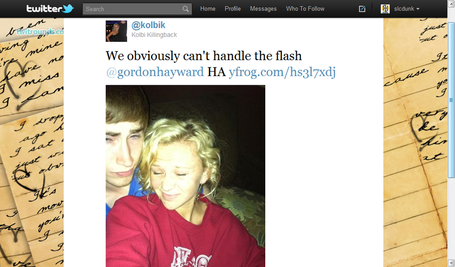 I planned on having an open lottery thread tomorrow night so we can all drown our sorrows together when the Jazz fall three spots to #9 and two spots to #14.