Share All sharing options for: The Utah Jazz Are In Good Shape With A Hard Cap - The Downbeat - #491

How does $45M sound for a hard-cap limit?  That's what the owners are pushing for.  Sam Amick reported last year that that was the number the owners were pushing for.  The Sporting News confirmed that number yesterday and indicated that it would require a reduction in players' salaries of about 25%.

That new cap wouldn't go into affect for a couple more seasons.  If the owners get their way, the biggest mess to sort out would be how to roll back players' salaries and get teams under the hard cap.  With the current $45M number being reported, only the Kings are under that amount.  They also had to pay out additional money this season because their payroll didn't meet the minimum requirements.

That means every team and every player would have to make cuts.  In two seasons, the Heat have a committed payroll of $71M and $76M the year after that.  And in 2016, the big three will be making $65M.  The Lakers have four players making $61M in two years.  Dallas is next with $41M.   What impact will that have on player movement?   From the Sporting News, we also learn a bit about new player categories,

Remember, teams can't go over the cap for any reason.  We don't know what the max player scale will be, but if you're the Heat, can you afford to pay those three even $10M each?  That would leave $15M to sign 10 more players.  They can't use the current rules which allow you to go over the cap in order to fill out the roster with minimum-salary players.  They have to stay under that cap.  Does that get Bosh shipped out?  They could also release him outright given the league's proposal for an amnesty plan which would allow the player to get paid but he wouldn't be with the team and wouldn't count against the cap.

The Jazz are actually in good shape for the 2014 season.  They only have Derrick Favors and Gordon Hayward on the books with team options for both.  Of course they're going to have to pay their first-round picks which will be counted then as well.  While there will likely be extensions for current players and another first-rounder next season, all of that will be under the new CBA.  Those team options for Favors and Hayward will likely be on the new rookie salary scale which means they will likely get a pretty big pay cut.  However, the Jazz should be able to shape their roster under the new CBA and won't have to worry about cutting players just to get under the cap.

Once again, the league and the players are in very early negotiations.  Even if they start agreeing on general terms, working out the details of those terms is going to take some time.

Kragthorpe brings up an interesting point.  If you're rooting for one team or the other in the playoffs, are you rooting for the Bulls or the Heat?  On one hand, while you may want Chicago to take out Miami given the whole Decision fiasco and #LikeABosh, you're also rooting for Carlos Boozer.

I'm sure everyone here would love to see Ronnie Brewer and Kyle Korver win a ring, is that enough to overcome Boozer being crowned a champion?

What I would give to know what goes through Fesenko's mind right before the Jazz come out of the tunnel.  There's not much going on here, but I find myself focusing on Fess,

Would you pay $30 for this Peak Sports Gordon Hayward shirt? 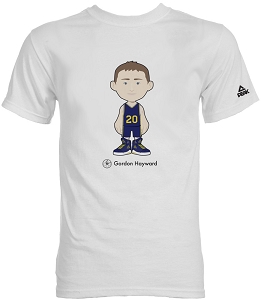 I haven't forgotten about the lottery.  It begins tonight at 6:30 MDT.  The draft thread will go up at 6:00.  I'll have a draft-related post later today.