Do The Jazz Or The Cavaliers Have The Best Chance To Move Up In The NBA Draft? - The Downbeat - #499

Share All sharing options for: Do The Jazz Or The Cavaliers Have The Best Chance To Move Up In The NBA Draft? - The Downbeat - #499

Sam Amick's mock draft from a couple of days ago has the Timberwolves taking Derrick Williams, but in his analysis he gives us this (emphasis mine)

It should surprise no one that Minnesota is entertaining offers for this pick. Williams is considered by most teams (including Minnesota) to be the best player available after Irving, but it's hardly a fantastic fit. Michael Beasley has a similar skill set, and forward Kevin Love and swingman Wesley Johnson don't appear to be going anywhere. One source says the Wolves have considered moving down a spot or two to take Enes Kanter while getting additional assets in a trade.

When it was reported that Minny may want to trade out of the 2 spot, it was apparently going to be for a veteran player and assets.  Moving down a spot or two though means a deal with the Jazz or the Cavaliers.

If the Jazz decide Williams is their guy, then they might have the assets to make that deal.  As for the Cavaliers, that would be quite the haul to land the #1 and #2 picks in the draft.  They would take Williams as well.

But for either of those to happen, Minnesota would have to be assured that Kanter would be available to them when they pick.  If they trade with the Jazz, that would guarantee it.  However, with a Cleveland trade, Utah still looms at #3 and could potentially take Kanter though they've been projected to take Brandon Knight.

Does that give the Jazz any kind of advantage then?  Could they make the threat of taking Kanter in order to dissuade Minny from dealing with Cleveland?

Another interesting note from Amick's mock is his #12 selection, Jimmer Fredette,

This entry comes somewhat reluctantly, but a source who has spoken to the Jazz insists that they are seriously thinking about taking the BYU product this high. The departures of coach Jerry Sloan and Williams mean the business folks want a new addition about whom the fans can get excited. The basketball part would be challenging for new coach Tyrone Corbin, as the pressure to play Fredette even if he didn't always want to would be significant. Lithuanian big man Donatas Motiejunas is also a possibility with the second of Utah's two lottery picks.

While you can see the business side of it, Greg Miller has stated that they wouldn't take him for that purpose.  The overall improvement of the team is the greatest need.  While Jimmer could be that player, it won't be the main reason he's selected.  Amick also makes a great point about pressure to play Jimmer.  While I don't think Corbin would be affected much so as to affect rotations, it wouldn't be long before someone writes an article asking why isn't Jimmer played more?

Then again he could be the savior of Jazz basketball and lead us to no less than 10 championships.

The Heat are the scariest team I've seen and LeBron is playing the most dominant basketball I've seen.  It doesn't take any keen analysis to tell you that though.

The games I've caught of them though make me wonder just how they plan on losing again.  When nobody else for Chicago could step up, LeBron was put on Rose in big moments and shut him down.  Rose is one of the fastest guys in the league and couldn't get around LeBron.  James could sag off of him a bit because he's long enough to still recover and challenge the shot.

If Bosh keeps doing what he did in the previous series and Wade throws on his 2006 invincibility cloak, they are going to be next to impossible to beat.

Dallas though has been playing as well as the Heat.  This is what you're supposed to get in the finals, the two best teams in the league.  I think we have that.

The key will be if the Dallas bench and their entire team plays well.

If it's close down the stretch, do we see LeBron on Dirk?

Remember Boozer's comment about the Heat having "two great players" that he made before the series? While Chris Bosh isn't on the level of LeBron James and Dwyane Wade, they were referred to as the Big 3 for the entire year.  So whether Boozer's comments were intentional or ignorant, they seemed to be a jab at Bosh.

However, Bosh owned Boozer in the series and M Haub Points out their respective stats,

Maybe Bosh had that quote up in his locker?

Nobody expected a defensive dual between the two.  On the contrary.  Both should have had big games against each other.  When Boozer's offense doesn't show up, what's left?  He still rebounded well but he's supposed to be the #2 option behind Derrick Rose and the Bulls didn't get that.

It got to the point where Thibodeau had to constantly swap Boozer in and out for Taj Gibson down the stretch of close games for defense and then hope for dead balls so that he could get the right player in for that possession.  It wasn't unprecedented; Thibs has sat him in the fourth before.

At this point though, despite Boozer's claim to the contrary, he's not going to become a good or even passable defender.  His his offense isn't going to be at an All-star level, then that contract could sink the Bulls. 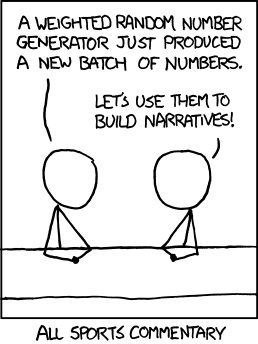 That's it.  You now have my permission to leave for the long weekend.  Have a great and safe Memorial Day holiday for those in the States.  Those elsewhere are free to adopt the holiday as well and go.