Are The Jazz Likely To Make A Return To the Playoffs Soon? - The Downbeat - #482

Share All sharing options for: Are The Jazz Likely To Make A Return To the Playoffs Soon? - The Downbeat - #482

What's it going to take for the Jazz to return to the playoffs?  When you take a look at the teams in the West that made the post-season, are there any that you see falling out?  I don't.

The only team that might be vulnerable is New Orleans. But as long as Chris Paul is there and once they get David West back, there's no reason to believe that they'll have a drop-off barring more injuries or Paul's potential free-agency/trade distraction.  We were hoping that would take down the Nuggets this season and it didn't.

Speaking of Denver, they're the only other team that could slide depending on what happens in free agency.  Nene could opt out.  JR Smith is likely gone (though you could say that's a good thing for them).  They have options on everyone else that they're likely to pick up.  I don't see them dropping though.

That's not mentioning the two teams that finished ahead of the Jazz in the standings but that didn't make the playoffs in Houston and Phoenix.  Of those two, you would put your money on the Suns staying the same.  Houston is an enigma.  I'm not sure what to expect from them until this off-season plays out.  They're getting a new coach, they could drop Yao, and they could make a big trade or two.  They're likely going to be there as well unless they decide to blow things up.

Then you have a team like the Clippers that are going to get better.  Golden State should improve but it might take another move or so.

So where does that put the Jazz?  Well, we're not going to be able to hope that other teams start dropping like flies in the standings.  The Jazz are going to have to win and win a lot to get back into things.  The way they closed out the last few months of the season doesn't inspire much hope.

They were struggling when Sloan and Deron left.  Could they have still made the playoffs if those two had stayed?  Hard to say with how well the other playoff teams were playing at the time.  There was a better chance though with those two than after.

I think we still underestimate the toll those changes took on the team.  Injuries didn't help of course but they turned over 3/5ths of the starters and brought in two new guys, one being a PG.

For the most part, the core group of guys that we had to close out the season are all going to be here to start next season.  If there's one thing we know, it's that the Jazz don't mind having a logjam at a position.  They played Boozer and Millsap for years together.  I don't think they'll care that they'll have Jefferson/Millsap/Favors fighting for minutes.  They may make a move during the season but not before.  The labor situation almost guarantees that as a lockout and resuming the season would be quick.

Add in the new draft picks and the Jazz are going to be  young for a while.  That's good in part but they're not likely going to be good enough to overtake the other teams for couple of seasons.

The owners presented the players with their latest offer last week but there wasn't much different from their last proposal.  From ESPN,

NBA players are not happy with the latest formal collective bargaining proposal from the league's owners, saying the new offer of a 10-year deal is only marginally different from the original one the owners made.

"Unfortunately, the proposal is very similar to the proposal the league submitted over a year ago," union president Derek Fisher told ESPN.com. "This last proposal doesn't look close to what we were expecting."

I am not an expert in negotiations but I've always wondered why these things take so long to get resolved.  We've seen this coming for a couple of years now and yet their have only been a handful of proposals submitted by either side combined?  Why aren't these things taken seriously until the current one expires and forces a work stoppage?

Here are the things the owners are looking for:

It is the second formal offer made by the owners, who are seeking significant rollbacks in existing contracts, a hard salary cap and a larger share of basketball related income -- 57 percent of which is guaranteed to the players under terms of the existing labor agreement, which expires June 30.

They're of course asking for the moon, knowing that when they meet somewhere in the middle, it will be close to what the owners actually want.  I doubt they get all three of those things.

The winners in all of this?  Everyone of course!

If you're not on twitter, you're missing out on memes such as #JazzDerbyNames.  Click on the link (you don't even have to sign up!) to read them and add your own here.  Some of my favorites:

Because you can't get enough of the KOOF:

(click for the video.  I couldn't disable the autoplay) 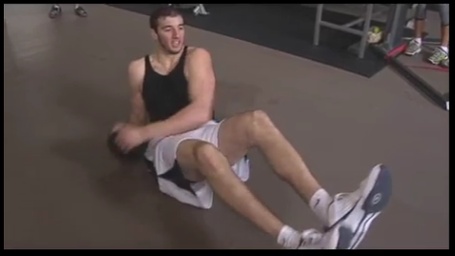 There's actually a lot of good videos on this site from P3 training facility that the Jazz frequent in Santa Barbara.  Many of the Jazz players visit it in the off-season for training.

Wednesday open poll...  Who was the first Jazz player you met in person?