The Jimmer Bandwagon Picks Up Steam - The Downbeat - #501

Share All sharing options for: The Jimmer Bandwagon Picks Up Steam - The Downbeat - #501

When Jimmer Fredette goes on to international fame and fortune, you'll be able to update his Wikipedia page and say that his NBA career was launched on The Crate. Yes, The Crate. After working out for the Pacers, he went on The Crate which describes itself thusly,

What, you may ask, is Pacers Crate? Well, a couple of years ago, we decided to launch an online roundtable program featuring the franchise's media icons -- Conrad Brunner (web), Mark Boyle (radio) and Chris Denari (TV). The problem was, we couldn't find an actual round table to use. We were able to find a crate and some stools, and thus the show was born. Along the way, as Crate has grown in fame (but certainly not fortune), our set has been graced by the likes of Charles Barkley, Reggie Miller, Clark Kellogg, Antonio Davis, not to mention a rodeo monkey that rides dogs, a Star Wars stormtrooper, a giant Donut and ... well, you get the picture. You never know what to expect with Crate, but we hope you'll find it as enjoyable to watch as it is to make.

Click on the still for the full video and watch out for falling signs. Party on Garth. Party on Wayne. 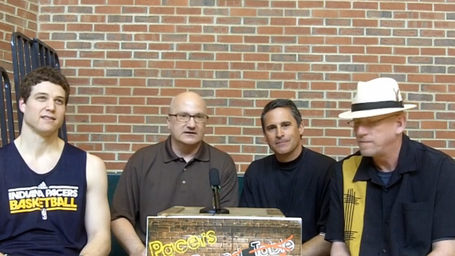 The Jimmer/Jazz momentum is picking up steam as well. According to Chad Ford (Insider), Jimmer is definitely an option at #12,

The Jazz are seriously looking at Kentucky's Brandon Knight and UConn's Kemba Walkerwith the No. 3 pick in the draft. If they take either player, it's highly unlikely they'd draft Fredette at No. 12. If they decide to go with someone like Enes Kanter or Jan Vesely at No. 3, then Fredette will be in play at No. 12, according to sources.

Again, the Jazz won't take two rookie PGs. So for those that are on the Jimmer train, you'll want to watch the #3 pick. That will give you an idea as to what the Jazz do at #12.

David Stern told reporters last night that there would be a big negotiation meeting today in Miami and he also let out this groaner, "We told the players and the owners to bring their negotiating talents to South Beach."

Really? You've had one of the most successful and exciting NBA seasons in a long time and you're going quote The Decision?

Regardless, the league stated that it lost $275M this season, down from the estimate $400M it lost last season. Twenty-two teams have lost money this season according to the league. I wish we knew which teams made money.

A chip off the old block. Michael Stockton was given a workout by the Jazz despite not being on the radar of the Jazz or any other team. That's a classy move by the Jazz org. He put up some solid numbers a couple of seasons ago at Westminster (couldn't find his recent stats). He also dropped some great quotes yesterday at his workout. From the Tribune,

"I believe in myself. I believe I can play with anybody," said Michael, who plans to head overseas in the hope of continuing his basketball career. "But the NBA is a completely different level. I'm not there yet, and that's OK. Will I ever be there? I don't know."

moni has more quotes from the media

According to Brian T. Smith, the Jazz still haven't decided on whether to pick up CJ Miles' option. The team has until June 30th to decide whether they're going to bring CJ back for one more season. Smith states that the players that the Jazz draft will likely have no impact on CJ's fate and that it's mostly for financial reasons.

I'm not sure what changes between now and the end of June financially for the Jazz. If they hang on to both first-round picks, then that's guaranteed money that they'll have to pay out. If they end up trading the second pick in a package, then that lowers the amount they'll have to pay next season and beyond. The one small downside of moving up in the draft is that the #3 pick will earn more than the #6 pick.

Of course all of that will probably change with the new CBA. If for some reason the Jazz don't exercise the option, then Miles would be an unrestricted FA. I don't know if he would get $3.7M on the open market even with the current CBA.