Jimmermania Hits Sactown. Coming To A Venue Near You Soon - The Downbeat - #508

Share All sharing options for: Jimmermania Hits Sactown. Coming To A Venue Near You Soon - The Downbeat - #508

Brian T. Smith has a couple of great posts on international prospects and on Brandon Knight.  He spoke to Fran Fraschilla of ESPN and John Calipari for the respective stories.

Well, with Brandon, whatever you think he's going to become, he'll become. I just think over three years, you're going to say 'Wow.' Whoever he gets him. Over a three-year period, you'll say 'Wow.' Terrific shooter. And you know shooting makes up for a multitude of sins. He can flat out make shots. He's bigger than you think. He's more athletic. He's got speed - a little bit like Tony Parker speed, where he can take it right at you and speed the game up a little bit. I'm sold on him.

Calipari has incentive to talk up Knight.  I'm sure it is deserved but Calipari benefits by having an NBA player to add to his resume.  Knight is going to get drafted and won't drop past 7 but a high pick like #3 looks much better than #7.  He also gives some John Stockton comparisons and shares a Stockton story.

Franschilla gives praise to both Enes Kanter and Jan Vesely.  He compares Kanter to Bigfoot and Vesely to Tom Chambers and at worst, Shawn Marion and AK.

If you're hoping for Jimmer at #12, you might be out of luck.  It seems as if the Kings were enamored with him in yesterday's workouts,

By the time [Jimmer] finished his 90-minute set Thursday at Power Balance Pavilion - shooting, passing and scoring against mostly taller, longer opponents - the Kings bosses were reaching for the tissues.

They weren't sobbing, they were salivating.

Geoff Petrie. Paul Westphal. Bobby Jackson. Gavin Maloof. Was there anyone in the Kings' private audience who didn't rush over to shake the kid's hand? Who didn't hover, as if what they really wanted to do was ask for an autograph?

Jimmermania will hit fever pitch in "his adopted home town of Salt Lake City" (you mad, Provo?) next week when he comes in to workout for the Jazz.  The Jazz are pushing for Fredette to go up against Kemba Walker and Brandon Knight.  He may have to work around their schedule though.  The Jazz have been pushing for a workout with all three PGs involved.

So Memo is now chilling with Kareem Abdul Jabbar who is in Turkey to promote Renault, an official car of the NBA: 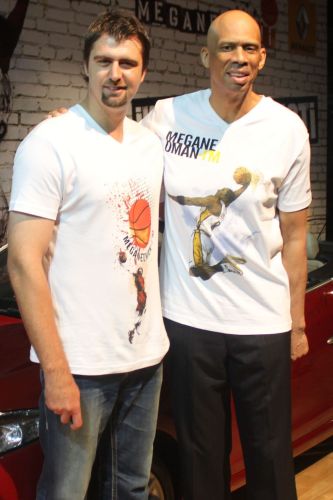 The dealership promoting this is called Meganeomani which has this very interesting video at their website:

Yeah, I don't know what it's all about either.  The Kobe jerseys don't appear to increase their skills though.

No word on how the workout and interview went yesterday with Bismack Biyombo.  In case you haven't seen him play or need a refresher, here are his highlights from the Nike Hoop Summit this year:

Friday open poll...  Any movie recommendations for this weekend?