Pop Quiz: When did the word "Edition" disappear from Downbeat titles? - The Downbeat - #509

Share All sharing options for: Pop Quiz: When did the word "Edition" disappear from Downbeat titles? - The Downbeat - #509

Do Kevin O'Connor and Ty Corbin have different expectations for the draft? From the Trib a couple of weeks ago:

Picking up where previous Jazz coach Jerry Sloan left off, Corbin wants to mold a team that is defined by toughness, sacrifice and character. Basketball intelligence and team commitment are more important than individual statistics. Corbin also wants confidence and experience instead of a project. Drafting at No. 3 during a good year can net a talented difference-maker.

KOC at the draft combine several days after that talking about the third pick:

Whoever we're going to get is probably going to be somebody that's not ready to play in the league, but is going to get some opportunities to play because of their skillset level...it becomes a situation where you do have to have some patience.

Dwight Howard is currently touring Europe for adidas Basketball. In Moscow, he was joined by Andrei Kirilenko and the New Jersey Nets dancers for the 5 United Slam Dunk Contest. 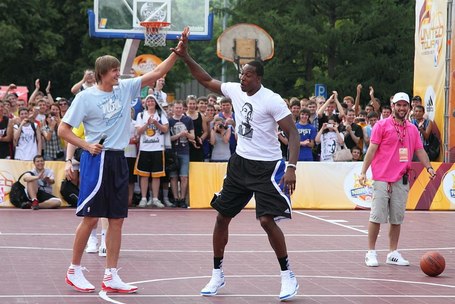 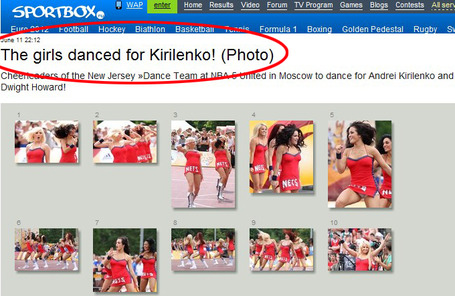 It's good to see that AK has returned to 2009-2010 hair length. In with the (preferable) bowl cut, out with the Russian mullet. (This is probably the point where you realize BBJ isn't the one writing this.) There were also reports out of Russia that AK's first pro basketball team, Spartak St. Petersburg, has offered him a 2-year, $12.5 million contract, which AK has denied. Video of Dwight dancing with the Nets dancers here.

Let's check in on our other Jazzmen. Mehmet Okur is hanging with Kareem Abdul-Jabbar and being, like, all GQ (via Memo's Facebook): 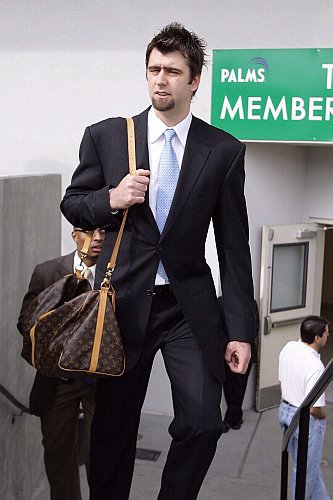 Devin Harris is making celebrity appearances at clubs, while Raja Bell is/was attending Finals games and sharing his thoughts on them. Gordon Hayward is streaming video games and embarrassing his girlfriend, while Jeremy Evans is racking up the frequent flyer gas miles for Junior Jazz camps. Sensei Francisco Elson is training with the Dutch national team, while Earl Watson (Sr.) is getting young basketball players to college. I couldn't find any news on Fes. What's up with that?

Since Jerry Sloan and Phil Johnson retired and/or since the regular season ended, the NBA coaching carousel has spat out five more head coaches. The four of five that left their posts involuntarily all had personal ties to Jerry and Phil. Rick Adelman was Jerry's former Bulls teammate. Keith Smart played at Indiana with Jerry's son. Jay Triano was once cut from the Jazz in favor of a kid named John Stockton. John Kuester's first NBA coach was Phil Johnson. Along with the departure of Phil Jackassson, you could say that the older/old-school generation of coaches is dying out...in favor of guys like Mark Jackassson, who recently talked about what he learned from the coaches he played for during his career. On what he learned from Jerry:

"I didn't have a great time in Utah but I learned how to get a team organized and how to get prepared where you play hard every, single night."

He learned how to get a team organized? As CJ would say, *smh*. Mark Jackson's brand of organization was so cancerous Jerry wanted to resign midway through the season rather than deal with his crap. (Yes, I will continue linking to this article until the end of my days.)

Seems like nothing gets the comment juices flowing around here like the draft. Sadly, y'all are stuck with me and my utter lack of draft knowledge today, but Clark will fortunately be here tomorrow to meet your draft discussion needs. I'll leave you with an open poll question for now: Let's say you won a lunch with KOC and Ty and they just adore the sound of your voice. This is an unprecedented opportunity for you to tell them how you'd tweak or overhaul the system. What would be your recommendation?