Since Clark Brought Back "Edition," Here's One More Edition - The Downbeat - #513

Share All sharing options for: Since Clark Brought Back "Edition," Here's One More Edition - The Downbeat - #513

Asked what went down during his workout with the Jazz, Brandon Knight said he worked out against the Jazz coaching staff on "pick and rolls, spot spots, finishing with my left hand, left hand speed dribbles, left hand jump shots, pretty much everything." Now, we know we're not going to get any substantial comments on the workout or Knight from the front office, but KOC did throw out this tidbit: "I tell you what. Jeff's slipped a little bit. His defense is, you know [shakes head] and Scott couldn't keep anybody in front of him." Knight, for his part, dispelled rumors that he didn't want to be in Utah: "It seems like a great place ... it'd be a place that I would love to be there." (DesNews). He also told KFAN, "Utah seems like a great place to be, and I would love to be in this city." I don't know if he was referring to Utah or Salt Lake City as "this city," but referring to Utah as a city is a good omen in Jazzland (see Malone, Karl).

@shandonfan recently implored Netflix to make "West Wing" available online since her DVDs were getting scratched up. This sent me on a search for the most-scratched (and irreplaceble) DVD in my collection so that I could back it up. Those of you that don't also own the John Stockton Retirement DVD might have never seen this, so here is John Stockton's retirement speech:

There are now rumors that the Jazz are looking to deal Devin Harris and Paul Millsap, or at least are open to the possibility. Any statements like "The Jazz are interested in..." or "The Jazz are looking to..." are most likely either made up or someone repeating something someone else made up. No one in the Jazz organization--the tightest lips in the league--would leak stuff. Believe a Jazz rumor once, shame on you. Believe a Jazz rumor twice or again, shame on you some more... :)

For those that have their sights set further ahead to late summer, the European Basketball Championships (8/31 - 9/18) might be the only basketball we get for a while if the lockout happens. Andrei Kirilenko is planning to play for Russia; Francisco Elson is planning to play for (and captain) the Netherlands; Kyrylo Fesenko is planning to play the Ukraine, and we'll probably get a chance to see the mysterious and maybe/maybe not future Jazzman Ante Tomic play for Croatia. Beyond that, half-Mexican Earl Watson has said that he wants to play for Mexico in the Pan-American Games, which is from 10/21 - 10/30. I'm assuming that he'll play in the Pan-American Games only if there is a lockout, as the tournament will conflict with NBA training camp/pre-season.

This bit was overheard at the beauty parlor comes to us from @dianaallen, who attended Jimmer's workout (and wrote about it here). Jimmermania continues to flex its muscles, as a number of fans showed up at the Jazz's practice facility with sleeping bags the night before Jimmer's workout, intending to camp out there. They were chased away by Utes fans security. Final note: Thanks to everyone that recommended Psych in the Downbeat a couple of weeks (?) ago. Midway through the first season, and really liking the show. **Update** Just came across this, so I'm going to throw it in as #5a/#6/ P.S./whatever. The Jazz's 2011 Draft Cap, which can be yours for just $25.99: 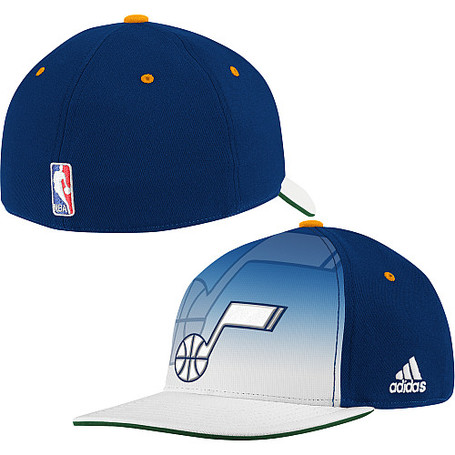