Where Do The Jazz Land An All-NBA Player? The Downbeat - #502

Share All sharing options for: Where Do The Jazz Land An All-NBA Player? The Downbeat - #502

Kurt Kragthorpe brings up an excellent point about star players in the NBA.  We don't have one and we desperately need one if the team is to return to true contention.  Kragthorpe lays it out,

Recent history shows it takes one or more great players to win the West. I'm talking about All-NBA players, not just All-Stars. Beginning in 1997 with the Jazz's Karl Malone, the West champion has featured at least one member of the All-NBA first team. That's one of the five best players in the league, as judged by voting at the end of the regular season.

Dallas technically ended that streak, with Nowitzki only a second-team choice this year. But considering he missed 35 games because of injury and almost made the first team, my argument is intact.

He goes on to speculate about the current Jazz players and which of them could turn into an All-NBA player.  Right now, as much promise as they've shown, they're all a long ways away from that status.  Derrick Favors of course has the most upside with Gordon Hayward next in line.

When you consider the other players on the first through third team from last season, will Favors or Hayward crack that list in the next 3-4 seasons?  With the exception of Kobe, all of those guys are relatively young and should be there for a while.

Let's say though that the Jazz don't have an All-NBA player but end up with 2-3 All-stars or borderline All-stars.  Will that be enough to return to true contention?

Two point guards who may never be associated with the Jazz again will play in the American Century Championship golf tournament next month in Nevada.  This is the golf tournament that Michael Jordan, Charles Barkley, and other big-name athletes play in every season with a purse of $600k and probably another $500k in bets.

Deron Williams and Jimmer Fredette will play for the first time in the tourney next month.  Mike Sorensen was on a conference call to talk with the two where Fredette was asked about "his golf game, his pre-draft workouts, the NBA lockout, his defensive liabilities and even one about a creative left-handed 3-point buzzer-beater he once made in high school and whether his basketball creativity will carry over to the golf course next month. Really."

DWill missed the call citing a time-zone mishap and missed the conference call but Sorensen was able to talk to him shortly after the call.  Deron talked a bit about Jimmer,

I've never met him, but I went and saw him play. I'm a big fan of his. I think he's a great player.

I'm just hoping that somehow those two get put into a foursome with Barkley.

Trust in The Kahn I guess.  He finally got Ricky Rubio to commit.  Rubio will come play in the NBA next season and will buy himself out of his contract with Barcelona.  The price for that buyout is $1.6M to which the Timberwolves can contribute $500k.  That will leave Rubio with having to pay $1.1M of his own money to get out of his contract.

I really didn't think we'd see Rubio in the NBA until the 2013 season for a few reasons.  One, that's a huge chunk of money for a buyout for someone that will be on a rookie salary scale.  That leads to the next point.  If he had waited until after next season to come stateside, he wouldn't be under the rookie salary scale and could have negotiated for whatever he could get Minny to pay him.  Finally, if there's a shortened season because of a lockout, that's even more money that he stands to lose.

The upside for him now though is that he could get some lucrative endorsement deals that would offset some or all of those losses.

So how does this pertain to the Jazz?  I don't know if this makes it more likely now that the Wolves will trade out of that two spot or not.  They definitely won't be taking Kyrie Irving should the Cavs go with Derrick Williams.  At least I don't think.  99.5% sure.  If the Cavs do decide to go with Williams, then the Jazz would have to take Irving unless someone trades up to get him.

You know what?  I'm probably going to stop trying to guess what Kahn is going to do.  Really, anything he does with the #2 pick wouldn't surprise me.  It's a major coup for him though to not only convince Rubio to come to Minnesota and to get him under a rookie contract.  I still don't know how he did it.

Remember Big Al's car?  Seems like he was in a little civil matter over the payment of getting his ride pimped.  From BDL (they also have video),

According to one Minnesota man, Utah Jazz big man Al Jefferson is a very, very bad man, having scammed the man out of $25,000 in a car deal gone wrong.

Eric Lero runs Sub Zero Sounds, up in Minneapolis, Minn., and he contends that Jefferson stopped payment on what was a $60,000 bill for work Lero did on one (we're hoping) of Jefferson's cars. Though Jefferson paid the first down payment and later dues after a court settlement, Lero isn't happy with the result.

Jefferson gave Sub Zero Sounds $30k up front for the work.  Later though after he paid the remaining sum with two checks, Jefferson cancelled those payments.  In the video, Lero states that Al's assistant told him to his face that they never intended on paying for the other half of the amount.  BDL goes on to speculate how things might have played out,

Jefferson looks terrible here for refusing to pay the second half of his bill, no matter how much money he makes per season (around $12 million per), but unless Lero added a sparkling new V8 into the mix, then that initial $30,000 sounds about right. For Jefferson to then have to pay $15,000 to Lero in order for him to cover court costs sounds about right as well. We're not familiar with the court case, and though there are flaws in our legal system, usually these sorts of claims courts tend to do a fair enough job getting people to pay off what they just bought. If Lero was owed another $30,000 plus court costs, Jefferson likely would have had to pay that.

Neither Jefferon nor his agent responded to the reporters calls.  Too bad we couldn't get Al's side of the story on this. 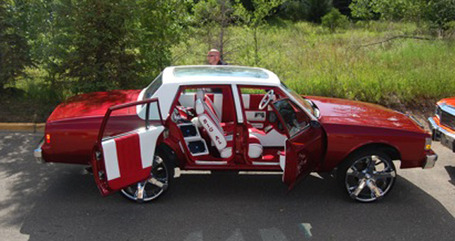 Jan Vesely is one of the international players the Jazz are going to see when they visit Europe this month.  However, according to HoopsHype (via SBN), Vesely won't be doing any workouts with teams,

According to his agent, Aleksandar Raskovic, Vesely will not take part in workouts with NBA teams. Raskovic said his client will be in New York on June 17, though, to go through physical tests akin to the ones draft prospects had at the Chicago combine earlier this month.

Vesely has been described as an Andrei Kirilenko clone, right down to the poor jump shot.  More from HoopsHype,

"He's a bad shooter and has to improve in that area, but he has all the time in the world to do that," said Nikola Loncar, a former world champion with Yugoslavia that's now doing work as an NBA analyst for Spanish TV. "He's a great leaper, but doesn't take physical contact well. He needs to put on more muscle. His body type is a lot likeToni Kukoc's right now. It's good that he can run and jump so well, but he needs to be able to deal with physical play better."

I'm not a draft expert by any means, but why is he a top-5 pick?  I know this is a down year for the draft but this doesn't sound like a player you take this high.