George Hill For The #12 Pick? Would The Jazz Do That?

Share All sharing options for: George Hill For The #12 Pick? Would The Jazz Do That?

Draft Express is reporting that the Spurs have offered up George Hill for the #12 pick, 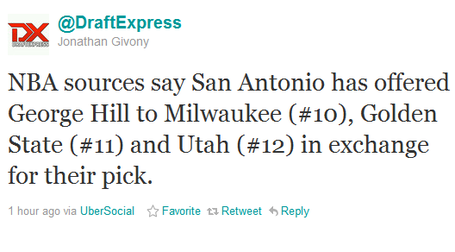 This is just one of the million rumors flying around from sources but it's one that hasn't been brought up before. There are also rumors that the Spurs are trying to trade Tony Parker to the Kings for their #7 pick.

Hill is signed through next season with a QO of about $3M in 2013. He would be a young, cheap PG who could take over full time PG duties once Devin Harris' deal comes off the books. He shoots the three well and has almost a 2:1 assist:turnover ratio.

The biggest question of course would be is he better than Jimmer or another player that would be available at #12. He would be about the same cost-wise but would be eligible for a pay raise a couple of years a few years earlier than a draft pick would be.

For me, he's a known commodity and has a pretty solid track record in three years in the league. I don't think he's a franchise-changing PG, but he could help a team contend. You would have to seriously consider this deal if he is available.