The Complete Turnover Of The Utah Jazz Roster - The Downbeat - #519

Share All sharing options for: The Complete Turnover Of The Utah Jazz Roster - The Downbeat - #519

If you need a bit of a visual to see just how dramatic the roster change has been, here is a list of the rosters when the season has ended the past two years.  I've included those that were/are free agents as well as the players drafted that year: 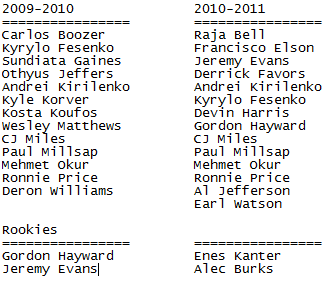 Only five names besides the rookies carry over; Millsap, Miles, Okur, Fesenko, and Price.  Of those five, Fesenko and Price are the most likely candidates not to be on the roster next season.  Millsap and Okur are players that could be traded. That's not to mention the possibility of Jefferson and Bell getting moved as well.  CJ Miles should have his option picked up, but that's not guaranteed at this point.  In the next few days before the current CBA ends, it's possible that we could have almost the entire roster turnover.

That is a rebuilding project.  And we're still not done.  Essentially the Jazz have drafted 5 players the past two years (I'm counting Favors here) and could have two more first-round picks next season should everything shake out with the Golden State pick.  That's also assuming that the Jazz will be in the lottery again next year.  That would be 7 draft picks over 3 seasons.

The difference between the last rebuild/retool in 2004 and this one is that we have a lot more talent this time around.  That team was much older as well.  The Jazz were able to recover quickly from that one in large part to landing Okur and Carlos Boozer in the following free agency and drafting Deron Williams.  The free agent signings were made possible because the Jazz had gobs of cap space and could offer huge deals to Boozer and Okur.

I'm not sure if the Jazz repeat that process.  For one, Boozer was a special situation in that he shouldn't have been available.  Of course, the team was also pursuing Kenyon Martin that same season so it could have been Martin with the Jazz.

This time around, the Jazz appear to be drafting both for need and getting the BPA at the time.  Right now, with just the recently drafted players starting, you could have a lineup of Harris, Burks, Hayward, Favors, and Kanter.  Obviously Harris isn't one of those drafted players but  the Jazz could go with a PG in next year's draft.  Bringing in Boozer and Memo filled a need at the time.  The Jazz will of course still need to bring in some FAs but it appears that they're going to let this new core develop into the future of the team.  There won't be any big-name free agent signings.  Instead, they will allow this current team to grow together and use the cap space for other things.

This team is going to be fun to watch over the next 5-10 years.  They're not going to win many games the first few years, but they will be fun.

In a season of odd and unexpected moves, we get another as it's been reported that the Denver Nuggets will not retain long-time assistant, HOFer, and former Jazz man Adrian Dantley.  From the NY Post:

George Karl is the latest in that long line of disillusion-ists. Three days ago, reveals a source, the Nuggets head coach, whose opulent contract was extended several months ago, fired top assistant Adrian Dantley.

Even odder is the apparent reasoning behind it,

Without Dantley's knowledge, either one or two lower-level assistants went to Karl and (hoping to get more exposure, I presume) asked to sit on the bench instead of behind it; league law allows three up front.

Karl alerted Dantley to the request and mentioned a possible rotation, yet never demanded it or set it in motion. Not looking to create any waves, A.D. shifted one row back without being ordered to.

The first thing that came to my mind was AD's actions were something Jerry Sloan would have done had he been in the same situation.  He's just there to coach and didn't care whether he was on the front row or the second.

Dantley was Karl's top assistant.  To put that move into perspective, that would be like Sloan asking Phil Johnson to move to the back and rotate with the other assistants.  Absurd.

On the other hand, I have a hard time believing that this was the only reason for letting Dantley go.  He didn't do well when he was asked to take over for Karl while the head coach was dealing with throat cancer.  Of course that was the season in which the Jazz were able to take out the Nuggets in six games.  Dantley seemed over-matched in that first-round series.  He was going up against a HOF coach though for what it's worth.  Having no previous head-coaching experience, you would expect a mismatch there, even with the Jazz being short-handed.

The Denver Stiffs believe the move had to do with getting younger and cheaper,

Given Dantley's seniority, by default Dantley was the "lead assistant" after Scott Brooks left. But Dantley was clearly in over his head when taking over the head coaching reigns for a cancer-stricken Karl for the remainder of the 2010 regular season and the playoffs that came thereafter. For the Nuggets to lose to an injury-depleted Jazz team while their head coach was battling cancer was inexcusable. Just read any of the comments left by the readers of this site during that series to see how much confidence the fans had in Dantley.

It seems to be a culmination of things that led to the Nuggets not picking up Dantley's contract for next season.  As Vescey pointed out in his article, it leaves Dantley in a bad spot to do this so late in the season and before a pending lockout.  Had he been told the news earlier, he could have caught on with another team.  Now he has to wait and see how things play out.

Of course with the Jazz of need of another assistant, could we see Dantley come back to Utah?  I would assume that it could be one landing spot for him.  I don't see the  Jazz or any other team making a move though on assistant coaches until the lockout is done.  They would be paying him for not coaching essentially.  Brian T. Smith also wrote that the team won't be bringing on any assistants before Friday.

It would be great to see him brought back into the Jazz fold.  He doesn't appear to have what it takes to be a head coach given his short stint in that position, but as an assistant he could do quite well.

The geek in me recognized that the jersey numbers that Kanter (0) and Burks (10) picked out put together is binary for 2 (010).  The first 0 is redundant, but there you have it.  Also, if you still need a sign that Kanter was the right pick, here's this pic from the Tribune (Francisco Kjolseth)with a slight modification, 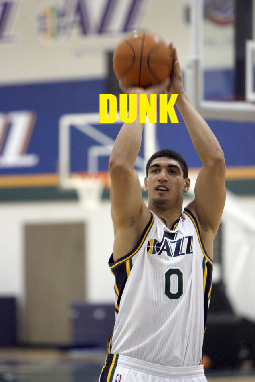 If you're really looking at what a CBA compromise might/could/should look like, consider reading Eight Points, Nine Seconds' offer.  It's long and very thorough and brings up some great points.

If you've always held back on reading about the CBA and getting to know the basics concerning trades, salaries, etc., now's a good time to get in on the ground floor.  That way, when you make a FanPost with trades to consider, you can add some credibility to your offer knowing why or why not certain players can't be moved.  The CBA is about to go through a dramatic change.  You can get a jump on everyone else.

If you're a CJ fan, this is good news.  He's in Dallas for his basketball camp but appears to be working out with Hornacek.  From his girlfriend on twitter, 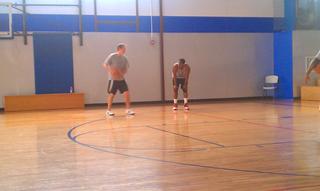 If you're looking to read into it, I would assume that the Jazz wouldn't be concerned with working on CJ's shot if they didn't plan on having him back.  Hornacek could be there to help him regardless, but flying to Dallas to workout with CJ is a good sign that Miles will be back.  The Jazz have until the 30th to announce it.