Where Does Mark Eaton Find His Horses? The Downbeat - #521

Share All sharing options for: Where Does Mark Eaton Find His Horses? The Downbeat - #521

Tom Ziller discusses why this lockout might be more trying to the players than the one in 1998-99.  The biggest demand for the owners is the hard salary cap.  Under their proposed structure, teams would have a set limit and there could be no exceptions for exceeding it like we have now with the MLE, Bird Rights, etc.  So while there wouldn't be defined limit on what you can pay a player per year, there's an artificial limit created given that with a cap of say $60M, you would have to pay 13 players.  So if you're giving two players $20M each, you only have $20M left to spend on the remaining 11 players.  If you have the big three setup like you have in Miami where they earn roughly $15M each, then you need a way to get 10 players for $15M.

That's where problems could arise according to Ziller.  Despite their united front, are the stars going to be willing to go to bat for the middle-class of the NBA?

The blueprint has been clear as the sea: the owners seek an overall hard on team salary, and, to get there, are willing to uncap individual players' salaries. How convenient! In a hard cap system, every dollar that goes to one player can't go to the next. Right now, there's no overriding reason for roleplayers to worry about Joe Johnson signing a $120 million contract. Sure, the Hawks are now stretched to the max, but it's not a zero-sum game, and in fact, a higher salary for Johnson helps rise the tide of salaries across the board.

In a hard cap system, it's all zero-sum, and these roleplayers, this middle class of the NBA will be damaged by the uncorking of individual salaries. The league presents this uncapping as a concession, as if the owners are giving the players something they want. Eighty percent of the union doesn't want this, and will find this to be an extra burden on their ability to earn.

The question is: how much do superstars like the idea of the abolition of the max contract threshold, and are they willing to fight their own teammates for it?

Both sides say that they're united but both still have issues that need to be resolved.  It's very similar for both owners and the players.  You have the haves and have-nots and all parties want to make sure they come out of  these negotiations and possibly damaging lockout with the best deal for them.  That's why despite having discussed things for the past two seasons, nothing has been done.  The lockout may be the only thing that gets things going.

It's coming.  Here's the official poster for the Dodge Barrage in August.  Sign-ups should be starting soon.  So start thinking about it now.   It looks like Ronnie Price isn't an official co-host but could still be there. 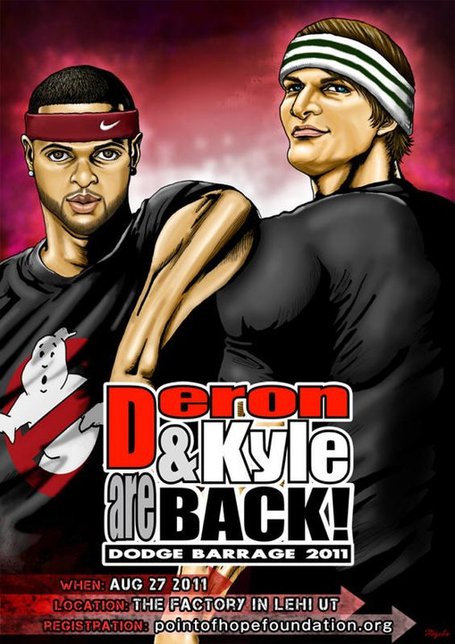 Most of you know Jody Genessy as the Utah Jazz beat writer for the Deseret News.  Well, now you can call him Ironman.  He gives his phenomenal story of setting a near-impossible goal of training and competing in the Ironman competition.

For anyone to train and compete and finish is a feat for anyone.  When you consider that Jody once topped the scales at 371 lbs. and competed at about 230 lbs., that's incredible.  Throw in his grueling schedule as a beat writer and the demands of his family and other personal interests, he deserves every part of the Ironman title.

Memo was on Turkish TV to talk about the lockout, Enes Kanter, and other things.  I'll embed the video but it's all in Turkish.  Someone gave a rough translation on JazzFanz.  It looks like they've already done some rookie hazing?

Sp: Do they make fun of rookies ?

Memo: Not much in utah but i have talked to a couple of teammates, they told about some jokes they already did to him but now its not proper if i say it on tv .

I think the biggest question that SI fails to ask Mark Eaton concerning how he adapts to being a seven-footer outside the NBA is just where exactly did you find a horse big enough so that your feet don't drag on the ground when you ride?