The immediate effects of the lockout will go into effect tonight.  No summer league to showcase the new draftees. The rookies can't even be signed.  No summer workouts at P3 for the Jazz players.  The players will likely get together on their own and do workouts and try to teach the new guys the playbook.

In negotiations, you always set have your goal in mind and then open your arguments much lower or higher hopefully ending close to what your original goal was.  So the owners demanding drastic cuts and changes shouldn't be too surprising.  I don't know what their actual end goals are, but it seems as if their starting point is much, much lower than you would have in a standard negotiation.  According to Billy Hunter, the two sides are far, far apart,

NBA Owners Authorize Lockout of Players in Absence of New Labor Agreement - Bloomberg
Following the owners’ most recent 10-year proposal disclosed by Stern, union Executive Director Billy Hunter said under those terms the sides would be more than $7 billion apart.

And yet the teeth have yet to come out from the owners,

Spurs Nation " Mike Monroe: It only gets harder for owners, players
Here’s the truly bad news: Once the lockout begins, the standoff is going to get nastier. According to NBA executives familiar with the league’s strategies, once the lockout is in place, the owners will push for a hard salary cap of $45 million, the elimination of guaranteed contracts and ask that the players swallow a 33 percent salary cut.

I, being an expert in all things concerning labor negotiations, don't see how the players don't end up giving in to the majority of the owners' demands.  The players are much better off financially this time around having put away their acorns for the long winter ahead.  However, short of the big-name stars, money will start drying up.  That's a problem that the owners aren't likely to face.

To avoid another 1999, the players are going to have to take different measures to ensure a quicker resolution.  I'm not sure if settling things through the courts is the way or not.  They may end up getting a favorable judgement, but how long will that take?

Both sides are entrenched in their stances.  Players don't want to give up what they've earned over the years and owners want to be saved from their bad decisions.  I don't think it's turning a profit that's the biggest concern for the owners.  If it was, they wouldn't have gotten into the league in the first place.  I think their biggest issue is what they consider throwing away money on players that aren't producing.

In this regard though, both sides are guilty.  We've all seen players produce in a contract year, get the big deal, and then not live up to it.  However, it is the GMs and owners that throw millions upon millions of dollars to players that haven't deserved it.  Whether it's pressure from fans, a personal favorite of an owner, or just simply bad judgement, they've all signed players they shouldn't have.  To me, taking risks on players or not signing players is one of the biggest competitive elements in the league.

If you're the coach or a player and you make a mistake in a game or series, you don't get a do-over.  So why should a team as a whole get a do-over?  There have been bad contracts that have strapped teams financially for years.  You don't want to see a team necessarily be terrible for decades; that's detrimental to the team and the league.

Owners want to be able to cut players that aren't performing.  The issue with that is that it's hard to quantify and put into a contract what would allow a team to cut ties with a player.  You can't just make it based on reaching a certain number of minutes, points, etc. for several reasons.

One, it would be too easy for ownership to pressure coaches to reduce playing time, etc., thus making it harder for a player to achieve their contractual levels of performance.  The owners could effectively cut whoever they wanted regardless.  Even if there wasn't pressure from ownership, he would certainly get some from players needing some extra PT.  All of this puts undue pressure on the coach.  Instead of playing the players that give the team the best chance to win, he might be tempted to make moves he normally wouldn't.

Two, I think the quality of play would diminish as meeting scoring or other requirements would take priority over winning or playing as a team for some players.  The league already has enough isolation plays; we don't need two players bickering over who gets to shoot when both are needing to up their scoring averages a little bit.

Third, there would be a lot of unforeseen circumstances beyond the players' control.  One example is with the Jazz.  Millsap, through no fault of his own, could be on the way out because of all of the big men the Jazz have drafted the past couple of years.  If he's competing for minutes and points, he could be limited despite being one of the hardest working players in the league.  He's likely not going to be one to complain about this under the current structure, but now what's he supposed to do?  If he needs to meet certain benchmarks, he may not get that with the Jazz.

There's a middle ground and we'll likely see it.  There needs to be a mix of guaranteed contracts but with options for the team later.  It's similar to what we have now.  In fact, looking at the existing rookie salary structure might be a place to start.  It would guarantee the first few years of a deal with multiple option years for the team afterwards.  Perhaps one provision could be that if a team declines those options, another team could have the option of picking up that player under the current deal.  That way teams that just want to cut a player based on salary and not performance risks losing them to rival.  I'm not even sure that would work; there just needs to be some risk on both sides.

The owners shouldn't be able to completely wash their hands of bad contracts and players shouldn't be able to collect a guaranteed paycheck while they do little to contribute.  That's where this whole thing needs to be.  It's not as easy as that of course but when we look back at things when we finally get a resolution, I think you'll find that things were a lot closer than we thought and that too much was lost.

One of my biggest questions about losing the entire season to the lockout was just how the draft would be handled next year.  There are no games played and thus no standings to base the lottery off of.  Here's what happened in the NHL when they lost their season.  From Wikipedia,

The loss of the 2004-05 season meant that there were no results on which to base the order of the 2005 entry draft. The league settled on a lottery system in which all teams had a weighted chance at the first pick, expected to be Sidney Crosby. The lottery was tilted so teams with fewer playoff appearances over the last three seasons and fewer number one overall picks over the last four seasons had a better chance of landing higher picks.

The problem in the NBA is that there are future draft picks that have been traded and that are contingent on where teams end up in the standings.  For example, if we lose the entire season, what happens to the draft pick the that the Jazz have from Golden State?  If it's a top seven pick, it remains with Golden State.  Otherwise, the Jazz will pick up another first-rounder.  If the NBA were to do something similar to the NHL, would the same rules apply?

Also, the chance that a team like the Lakers, Spurs, or Celtics could land a lotto pick doesn't appeal to me.  If you're an NBA conspiracy theorist, these are marquee teams that are looking to rebuild but aren't bad enough to land in the lottery.  Maybe the whole lockout is to give them some lotto talent?  That's far fetched and ridiculous but if one of those teams or Miami, Dallas, etc. were to win, that would be hard to swallow.

Hopefully we don't have to worry about that. 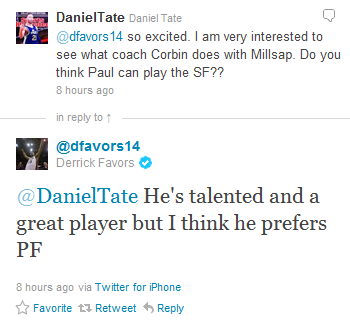 Once things get going again, this is going to become one of the main conflicts that will need to be resolved.  Of course there's no personal conflict between Favors and Millsap.  The conflict will be who starts and who gets the most minutes.  It may vary from game to game depending on match-ups but there are only 48 minutes to go around at PF.

You could conceivably play Millsap at the PF and Favors at C for stretches but that eats into the minutes at C.  It's a tough spot for both of them.  Favors should be getting 35 minutes a night with the majority of those at PF.  That only leaves 13 minutes at that spot and that's not nearly what Millsap should be getting.  Sap could be getting some minutes at SF as well, but he's not going to play there much.

I think that Millsap is too good and too cheap salary-wise to move him.  He should be getting 30+ minutes a night as well.  This is where Tyrone Corbin is going to earn his paycheck.  He's going to have to manage getting both of these players adequate playing time.  We haven't even discussed the issues with Mehmet Okur, Al Jefferson, and Enes Kanter.  There just aren't enough minutes to go around.  You could make a case for any of them getting more minutes but playing time is a finite resource.

For the last lockout, David Stern grew his lockout beard.  That's so 1999.  I think we needs to look into doing some of the following alternatives:

Thursday open poll...  How will you replace the NBA should there be actual games lost?