So had DWill remained with the Jazz, how many fans would be freaking out over this right now?

Williams is expected to sign with Rose, the source said, with the hope that Rose's star power will help bring top-tier talent to Brooklyn, which is where the Nets are expected to move for the 2011-12 season.

If Williams is trying to lure some star talent to Brooklyn with him, the list of star clients from CAA that are available is thin.  Only Chris Paul will be a free agent at the same time as DWill and they kind of play the same position.  Everyone else is either under contract for a while or isn't the caliber of player that you would consider when trying to create a Big 3-type team.

One thing that can't be argued about The Trade is the anguish that it saved Jazz fans over the next year caused by speculation on Deron's departure.  This move would have pushed most fans into panic mode and rightfully so given the agency's past dealings with their star players.

Anyone have one of these to sell?  I need one for my desk.  I don't think we'll get another McFarlane-typeJazz figures for a long time. 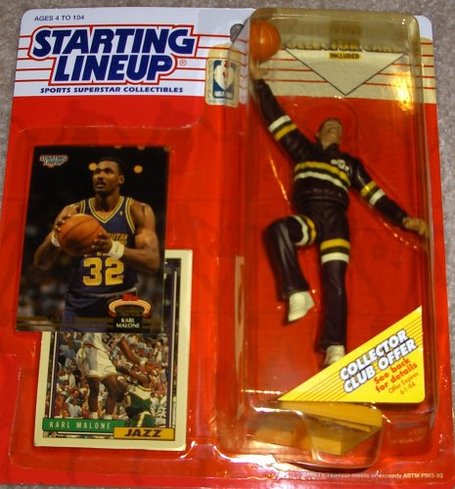 ESPN 700 talks to Jeremy Evans (mp3) from the road while he's doing the Lord's work (Jr. Jazz camps over the next three weeks)

And we thought that Gordon Hayward pioneered frugal eating,

Yes, there actually are athletes who live within their means. I know of at least one Jazz player who on road trips would walk across the parking lot to a grocery store and buy bread, baloney and mustard so he could save his per diem. Granted, he wasn't he most secure guy in the lineup, but still, his per diem was in the $75 range. And at that time, in the early 1990s, his salary was around $250,000.

No, he didn't need to buy lunch meat on the road trips, but I also saw him at Olive Garden and McDonald's on the road. Not exactly living the high life.

Hayward got a lot of flak for his OG visit and he makes 10 times what this player did.  Even with the warning from the Player's Association about saving up for the lockout, Hayward seems to be

Draft Express has a great breakdown of Enes Kanter from the slim footage there is of him playing against opponents.  He gets high praise for his offense, but has a lot of work to do on D,

This lack of experience shows up first and foremost on the defensive end, where Kanter was incredibly ineffective in the film we watched. His fundamentals, instincts and positioning leave a lot to be desired. He can often be found standing straight up in the paint with his arms down, putting in little to no effort. He rarely boxes out his opponent and generally looks disinterested in anything that has to do with defense. He rarely bends his knees and often fails to get back in transition--doing very little to protect the paint when he does.

As Clark stated on twitter, he sounds almost like a clone of Carlos Boozer.  To me, Kanter has the biggest bust/superstar potential in the draft.  I don't know if there will be any middle ground with him.  Maybe he'll settle in to being a very good player who might solicit some All-star votes.

With his tools though, he could be an All-star.  The biggest reason I have for his bust potential is his limited competition against quality opponents.  He did put up huge number at the Nike Draft Summit last year, but that's just one All-star-type game.

He's definitely one of, if not the biggest risks in the draft considering where he's supposed to be taken.