Gordon Hayward Has Taken To Planking - The Downbeat - #533

Share All sharing options for: Gordon Hayward Has Taken To Planking - The Downbeat - #533

The NBA laid off 114 employees this week due to "underlying issue - that is, the league's expenses far outpace our revenues" and not as a result of the lockout according to the league.  Those expenses though, as Matt Moore writes, are the result of opulence from the NBA and perhaps those staffers could have been saved had the league reigned in its spending,

Tomorrow I'm taking [the mouse and mousepad] to the nearest charitable donations joint and dropping it off. Because now it's just a reminder of how opulence wasted has cost 114 people their jobs tonight when it shouldn't have. It's nothing but a guilty reminder of how the mismanagement of resources and revenue can wind up costing real people their jobs, jobs they need. All I can think about is the stacks and stacks of mouses and mousepads, most of which were most likely never claimed, sitting there on a table. How much could have been saved without their purchase, transport, or handling? It's not just a trinket, it's a guilt trip after what the league has decided this week.

According to the NY Times, there are no plans to re-hire those affected employees -- which include senior-level officials -- once the lockout is over.

We'll never know if these staffers would have been let regardless of the lockout but the timing of it, paired with teams also laying off employees at roughly the same time, seems to indicate that the lockout is indeed playing a role.

J.A. Sherman has a fantastic reminder and write-up of one of the greatest deals in sports history and its potential impact on the NBA today.  When the ABA folded and some teams merged with the NBA, instead of accepting a buyout from the NBA, the Silnas brothers, owners of the Spirits of St. Louis negotiated another deal:

Make sure to click through and read the entire thing to see just how much money they're pulling in from this deal and how it impacts those four ABA teams that merged with the NBA.

it was either amazing risk or foresight on their part.  They were able to get $2.2 million alone, almost what the other folding ABA owner got ($3 million) so perhaps there wasn't too much risk involved given that they would only have to make up $800k over the life (forever) of the deal just to get back to the original offer.  Instead they've made hundreds of millions off the deal, a deal which goes through today and for the life of the NBA.

The Spirits have some ties to Utah.  Had the ABA not merged with the NBA, the plan was to move the Spirits to Utah and rename them the Utah Rockies.  That obviously didn't happen.  The ABA already had a team in Utah of course, but it had to fold due to financial problems.  Most of the players, including Ron Boone, were sold to the Spirits.

Thanks to Diana Allen for this link.   A member on JazzFanz has started up a list of Jazz videos.

I thought we might be able to escape this planking craze which apparently has taken three years to cross the Pacific from Australia.  However, it's now upon us.  NBA players have been busy posting their planking pictures on twitter with guys such as Dwight Howard and Gilbert Arenas paving the way.  I you don't know what planking is (did you just get a computer today?), here's the Wikipedia description,

The lying down game (also known as planking, or face downs) is an activity, popular in various parts of the world, consisting of lying face down in an unusual or incongruous location. The hands must touch the sides of the body and having a photograph of the participant taken and posted on the Internet is an integral part of the game.  Players compete to find the most unusual and original location in which to play.

Well, thanks to the magic of twitter, we now have our first Jazz player planking courtesy of Gordon Hayward, 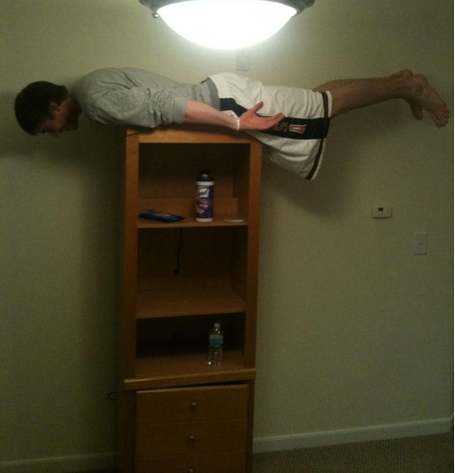 He then posted another planking of his friend to which my immediate reaction was, "Is that Hoosiers that they're watching?"

Who will plank next?  Derrick Favors (who's been sending some mixed messages on twitter)?  CJ?  Burks? Kanter?  Ron Boone?

Just don't try this at home, I'm pretty sure that it's illegal in Utah anyways.  At least on the BYU campus anyway (sorry for the repeat joke for the G+ followers).