Share All sharing options for: Andrei Kirilenko Readies His CV - The Downbeat - #534

To steal a Dan Patrickism, "The replay confirms what we already knew." Hardwood Hype takes a look at the best players over the past 30+ years when it comes to PER (efficiency rating) and usage percentage. Who tops the list?

Lead guards: quality over quantity. At the other end of the positional spectrum we have point guards. Point guards, who tend to have lower Usage Rates than players at other positions despite handling the ball a ton (assists do not constitute "usage"), occupy an especially interesting place in this group. Despite representing just 10% of the overall list, all rank in the top 13, with the three highest PER/USG rates since 1977-78 belonging to lead guards.

John Stockton epitomized efficiency. Given his demeanor and style of play, it comes as no surprise that advanced metrics cast a favorable light on his body of work. He averaged just over nine field goal attempts per game (making 51.5%, including 38.4% from 3), hit his free throws, 16 times ranked in the top 10 in Steal Rate (sixth all-time) and turned the ball over less than three times per game, despite having it glued to his hands for 1,504 games over nearly two decades. Still, I must admit to a little bit of surprise, as heading up a list like this is kind of a big deal. I guess that John Stockton though- stealthily efficient.

They really do a great job at breaking everything down and pointing out why power forwards and center are likely to rank higher on this list.

Moni has the lowdown on what the Jazz players are up to accessory-wise over the summer. Go for the AK, stay for the Harperjack.

And AK, I think you're dangerously close to losing your nickname with this most recent look, 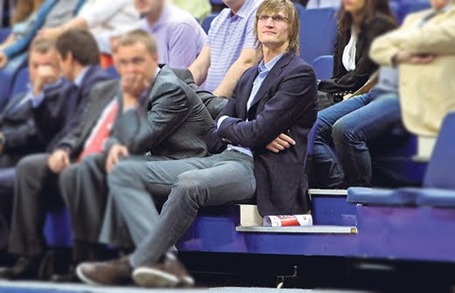 Unless you're planning on applying for a job as a professor at Moscow State University, ditch the locks. I don't care if Masha likes it; bring back the 'hawk.

I wonder if any team has expressed at much interest in Kyrylo Fesenko as Caja Laboral has over the past several years. There was talk about them courting Fess last year at this same time and now they're rumored to be going after him again (via HoopsHype) This time he might actually land there given the state of the NBA right now and the fact that (Google translate):

... last season [he] has earned over a million dollars gross in the NBA , the net amount Caja Laboral can duplicate, at least without any problem

If we were to sign with the club, he would likely be committing to playing there for the entire season regardless of what happens in the NBA. Either way, it could help boost his stock if he wanted to return stateside.

David Stern putting the screws to FIBA a bit in order to dissuade players from heading overseas?