Share All sharing options for: Jazz Games on KJZZ? - The Downbeat - #536

A major bargaining session between NBA owners and union leaders won't be held until August at the earliest, reports CBS Sports' Ken Berger. That means that the league is on the exact pace it was in 1998, when the lockout lopped off two months and 32 games of basketball. Awesome! The worst part is that in 1999, in assessing what they had done, commissioner David Stern and union head Billy Hunter acknowledged that they should not have dragged their feet at the lockout's start, that failing to get to the table on time hurt the sides' ability to find a workable deal.

The sides will be meeting on the 22nd of this month, however, it will just be to schedule more meetings.

The Basketball Jones lists their top 10 small forwards of the past 30 years and Adrian Dantley checks in at #4,

When I think of an old school scoring basketball player, I somehow always think of Dantley. I'll admit that he was to some degree a ballhog, but when you shot as well as he did, could you blame him? A.D. could work the post, dribble down from the top of the key, give a spin move, sell a shot fake and had a myriad other ways to score. I personally thought he got the shaft when the Detroit Pistons traded him to the Dallas Mavericks for Isaiah Thomas' best bud, Mark Aguirre, but such is life. Dantley was in the twilight of his career, but still scoring 20 on the regular, and the Pistons went on to win a couple of titles because no one was there to challenge Zeke's control of the team.

Here's what I wrote a while back about his numbers when his jersey was retired with the Jazz:

He was a scorer in every sense of the word and possibly one of the most unheralded players.

From the Fan on KJZZ (sports show on KJZZ), we learn that there have been discussions about re-airing Jazz games on KJZZ 14,

Don't be surprised if you see it. RT @DJJazzyJody Solid idea. RT @ujazzfanzz: KJZZ should show past games Jazz [games]

Ever since the Jazz signed their exclusive deal with ROOT (FSN), there have been no live Jazz games on KJZZ. I've said from the beginning that they should make it into a 24/7 rebroadcast marathon of games and live up to their call letters. That's not exactly feasible but one or two games a night would be fantastic.

The biggest driver behind it of course would be money. They make a lot off of Friends re-runs and infomercials. And with the lockout, they couldn't show any games that have current players. That's probably fine for most. I'll take any breadcrumb I can get at this point.

I don't think that we full comprehend just how big Memo is in Turkey. He's seemingly everywhere rubbing elbows with everyone. He continues to do good work over there though as he helps promote organ donation(Google translate):

Memo "Today, after living because what I saw, and spared all the organs. This issue also has to be more sensitive to everyone. Hocalarımızdan regret that I learned that very low levels of organ transplantation. Bağışlayacağımız organlarımızla 7-8 can save lives." he said.

Memo who donated the organs of the press conference also received a big hand to explain.

He was donating organs right on the spot! What an ambassador.

Finally we see that Fesenko is actually working out with the Ukrainian team. Giving interviews at least, 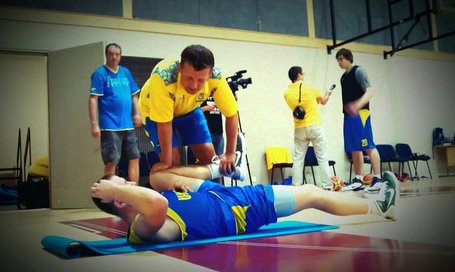