Al Jefferson Deprives Us Of Trampoline Slamball - The Downbeat - #538

Share All sharing options for: Al Jefferson Deprives Us Of Trampoline Slamball - The Downbeat - #538

If you've been wondering why there haven't been more NBA players under contract head overseas like Deron Williams, they're waiting to hear on the ruling from FIBA on DWill's deal,

And so all eyes are on FIBA and the Williams test case. In situations like this, FIBA will make a ruling within 10 days, and though the Williams signing has been known since early this month, the team did not make the official announcement until Tuesday of this week. That means a FIBA decision should come down by next Friday. If FIBA approves the deal, we'll likely start seeing other NBA players look for international contracts with the same out clause.

I didn't think that someone like Kobe would head overseas, but apparently he's seriously considering playing for the same Turkish club.  They'll meet in August.

Should the ruling from FIBA be favorable to Williams, and provided Stern didn't go Godfather on the FIBA president in their recent meeting, players could be signing deals starting next week.  If that falls through though, the Ministry of Magic has already stated that NBA players could play some friendlies against the Hogwarts Club and some other professional teams. 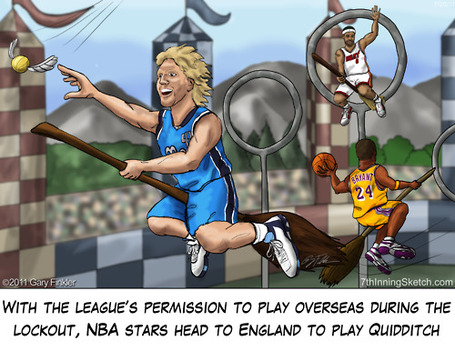 It's unknown if their insurance would cover maladies suffered from hexes and such.

We've been a spoiled bunch of fans for almost 30 years.  As Tom Ziller shows, the Jazz have had the fourth-most winning seasons since the 1976 NBA/ABA merger.  That's even with the team sucking so much in its infancy.

With AD, Griffith, Horncek, and Stockton already listed, I'm eager to see who the Utah Jazz Blog has listed as the #1 Jazz shooter of all time.

Moni reminds me of a couple more reasons why this lockout will blow.  One, if it lasts the entire season, we likely won't see the Jazz honor Jerry Sloan this year.

Also, even if there is a season. it's likely to be shortened.  This year is the 20th anniversary of the opening of the Delta Center/ESA.  It opened October 4th, 1991.  The first home game, a loss to the Sonics, was played November 7th. (More on this to come later).

We should be recognizing these this season and it's likely that we wont.

Thanks to Diana Allen and Clark for the heads-up on these videos.

I thought he was talking about learning basketball skills on the trampoline.  For most of us, that's the only place we've ever been able to dunk.  I'm disappointed that we didn't see Al jumping on the tramp.  If  the NBA players tire of planking, craning, or whatever else they're doing, I would pay to see them play bum war, slamball, shoes (fire) or any other game where we see giants launching each other into the air.

As for Alec Burks, he's out playing in he Indy Pro-am.  What's he doing in Indy?  Apparently the Jazz told him to hang out with Hayward for the summer.  OGTime didn't play in the game as we was healing up a bit.  It's a little awesome that the Jazz felt that Burks would be best developed by hanging out and working out with Gordon during the lockout.