Where Kyrylo Fesenko And William Shatner Collide - The Downbeat - #541

Share All sharing options for: Where Kyrylo Fesenko And William Shatner Collide - The Downbeat - #541

It's not a big stretch for AK to play in Russia this year if the lockout continues.  In fact, it's almost a given.  Sportando is reporting that his agent has been in talks with Spartak SPB.  What may be a bit surprising is this statement by AK,

"I don't want to offend other teams in Russia, but I started my career with Spartak and CSKA and I would join just them in case I returns to Russia. By the way, I cannot exclude the retirement at the end of Eurobasket 2011".

Retirement?  He certainly has a lot of years left if he wants to keep playing.  The more I think about it though, he just might do it.  Money isn't an issue obviously.  He may just decide that spending time with Masha and the kids.  Maybe he decides that he wants to sit on catwalks and look at models all day.

Woah, Fess is working on a lefty hook?  Also, I defy you to not picture William Shatner as Mike Fratello coaches.  If someone speaks Russian, can you let us know what Fess says at the end?

Not sure who looks more like the fish out of water (From @PDXTrailblazers via BDL). 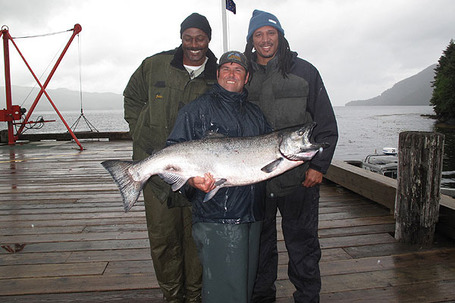 Oh no, the Blazers are trying to steal Karl Malone as well.

He watched the draft, right?  From the HoopsWorld chat:

Hi Jason , In your opinion, what trades do think the Jazz need to do, I would put up Bell, AJ & Harris but only if it made The Jazz a better unit!

Sure would be nice to get Mehmet Okur off the books, wouldn't it?
Of those three, Jefferson would the top choice to move. He's not really a center and Utah has Millsap and Favors also at the four (I don't buy either one playing the three).
In return they need a dynamic wing scorer. Gordon Hayward and Raja Bell are fine, but not together. The Jazz need that athletic wing who can create his own shot, so they don't have to depend on Harris all the time.

Alec Burks may take a couple of seasons to get become that primary option in that role, but they have their wing.  Speaking of Burks...