The Long Hot Summer Of The NBA Lockout - The Downbeat #526

Share All sharing options for: The Long Hot Summer Of The NBA Lockout - The Downbeat #526

It's been said that the owners' push for a new CBA is an effort to save themselves from themselves.  The league has claimed over $300M in losses for the previous season with players' salaries being the biggest culprit according to the owners.  This is despite it being the owners who are giving out these contracts.

Yesterday, the Nate Silver of the NY Times broke down the numbers available to him (remember, the owners haven't released any financial information) from Forbes valuations and other outlets and came to the conclusion that the league has actually been profitable,

Even as it stands, however, the Forbes data suggests that the league is still profitable. Its operating income - revenues less expenses (but before interest payments and taxes) - is estimated to have been $183 million in 2009-10, or about $6 million per team. The N.B.A.'s operating margin (operating income divided by revenues) was about 5 percent in 2009-10 and has been about 7 percent during the life of the current labor deal.

Once again, this is relying on data from Forbes.  According to the NYT, the primary cause for the teams losing money has been the rise in non-player expense.

The league has responded to that report and shot down most of Silver's claims.  Their first rebuttal is as follows,

"[The N.B.A.] is a fundamentally healthy and profitable business"

¶ The league lost money every year of the just expiring CBA. During these years, the league has never had positive Net Income, EBITDA or Operating Income.

They also go on to state that they "do not include purchase price amortization from when a team is sold or under any circumstances in any of our reported losses."

They also state that they use GAAP (generally accepted accounting principles) in regards to their financial reporting.  Until the long-form financials are released, the NBA's claims will always be met with skepticism.   The league has stated that they have turned over all of the financial documents to the NBAPA.  There's no doubt a request from the NBA to not release those documents to a reporter or the general public.

While there have been some good articles written that have questioned the legitimacy of the NBA's financial claims, I doubt that the NBAPA doesn't have multiple experts that have scoured those documents.   Even with those documents in hand, the NBAPA disputes what is being constituted as a loss.

What it comes down to though is the owners trying to save themselves from themselves.  It's not from signing players to large and cumbersome contracts though.  Remember, the last lockout in 1998 and the modification in 2005 was all at the owners' behest.  They felt that that deal was needed in order for them to make money and to save the league.  Yet here they are now thirteen years later stating that they've lost money every year since then.  I can see why they would want to fix their current "broken" deal.

Again, the owners are saving themselves from themselves.

If you're a believer in Dave Berri's Wages of Wins, then you'll be pleased to see who he has listed as the best value players in the league according to wins produced versus salaries.  Basically, he assigns a value for each win, multiplies that by how many wins a player produced, and then compares it to that player's salary.  The bad news for the Jazz is that they ranked second to last in overall team value.  I've copied and pasted the relevant graphs below.  The post has a very large image of the entire league, so load at your own risk.

It shows why Paul Millsap remains  one of the best value picks in the league.  I expect the value for Favors and Hayward to go up next season as they establish more prominent roles with the team while remaining on their rookie contracts.

As expected, AK was near the bottom of the league when it comes to value despite producing nearly as many wins as Millsap.  AK's value will no doubt go up when he signs his next contract.  Memo ranks low, as do most of the top players, due to injury which isn't factored in these rankings. 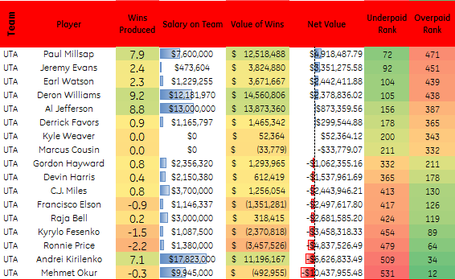 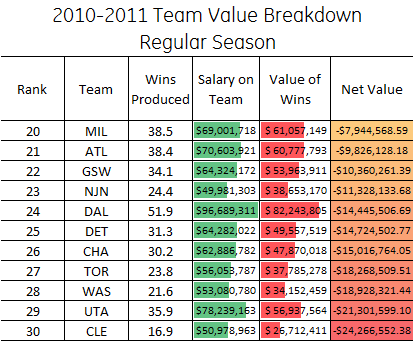 Tom Ziller will be posting a "This is why we can't have nice things" of the day throughout the lockout.  He'll be listing contracts that have contributed to this mess.  No doubt a certain Russian's deal will come up.