Jerry Sloan Is Selling Off Everything - The Downbeat - #557

Share All sharing options for: Jerry Sloan Is Selling Off Everything - The Downbeat - #557

First Jerry Sloan got rid of all of his tractors, now he's auctioning off some antiques that he has in Indiana.  These were part of his late wife Bobbye's collection when she was an antique dealer.  There are many Jazz or basketball related items, but there are a few things of note:

John Deere sign - I guess if you don't have any more tractors, you don't really need this sign.

Miller High Life Basketball Hoop - You haven't lived the high life until you've hooped on this.

US 6 - A sign from one of the deadliest roads in Utah and in the country.

John Deere tractor side panel - Again, no need for a side panel for fix-ups if you don't have any more tractors to fix up.

Bud Light Utah Jazz clock  - This one is going to go high, so open your wallet.

Deer gun racks -  These should sell for a small fortune in Indiana and Utah.

Deer head - Want the deer rack, but don't have a gun?  Here's the whole head.

As Ross Siler pointed out, the Pabst Blue Ribbon beer clock would be a hipster's dream.  That, along with any of t he numerous bicycles would give you instant hipster cred.

I would love to bid on some of these things if I didn't have to go to Indiana to get them.

(h/t) everyone on twitter.  I couldn't find who first posted about this

A Russian blogger yesterday tweeted that AK was in serious discussions to play for CSKA in Russia next season,

It's not that unreasonable to assume that he would play for CSKA.  In fact, in his recent interview with Sports.ru, he pretty much said just that,

How can Spartak St. Petersburg attract Andrey Kirilenko? They won't even play in the EuroLeague.

I don't care about the European cups at all; it's my native team, that's it. If I returned to play in Russia, I would do that with my native team, not the one that has bigger ambitions and wants to win something. Anyway, I will try to make it so that my team would play as good as possible. But I will repeat, nothing is clear yet, now it's all at еру negotiations stage, a lot of options have to be taken into account. Even without a contract, I am still in the NBA system, and it's a little bit hard for the teams to sign a player knowing that he will leave in 2 or 3 months.

That native team he speaks of is of course CSKA.  I don't know what the time frame would be, but it's not going to surprise me at all when he signs with them.  It could be right after Eurobasket is complete.  He will have an NBA out though.

Great Sporacle quiz from Prodigy (maker of fine Utah Jazz videos on YouTube)  Can you name all of these players?  Click on through. I only scored 8 out of 16.  I would have got 9 but it doesn't appear that Mark Eaton is listed. 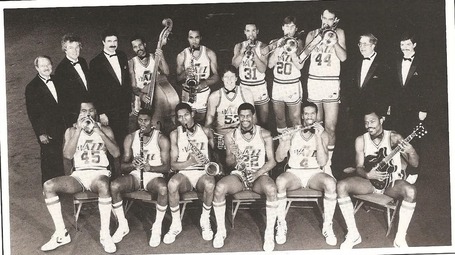 What an awful trade for New Jersey from Chris Broussard (Insider).  In his article about keeping Dallas a contender, he submits the idea that they should trade for Deron Williams.  That would be more than enough to keep them contending, but why would NJ do this?

Milwaukee: Jennings, of course, goes to New Jersey/Brooklyn, but the Bucks also move the disgruntled Andrew Bogut, sending him back to Utah (where he starred in college) and making him the Jazz's new center. The Bucks also send a first-round draft pick to Utah. They get back Beaubois, Utah's Al Jefferson and Jersey's Lopez. Starting five: Beaubois, Stephen Jackson, Luc Richard Mbah a Moute, Jefferson, Lopez.

New Jersey would give up their two best players for Redd, Millsap, and Chandler?  This would be a steal for the Jazz as well.  I would imagine having Bogut back would make a lot of fans happy, Ute fans or not.

Thursday open poll...  Your favorite unusual sandwich that is actually delicious...  One of mine:  Peanut butter, honey, and bananas.