Share All sharing options for: Sunday Syncopation #40 - Don't call it a comeback

This is really a post by Amar, during this long lock-out, or merely just a mirage? And why is it one day early? Jeeze, Amar, when well you get it together?

So . . . right now we’re in the second NBA players lockout (after all, let’s not forget that the owners are the ones who locked the players out) in 14 seasons. This is the fourth lockout in the NBA, ever. The league has been around since 1946. The NBA is older than the Roswell crash. We’re having more lock outs at a increasing rate. (Quick math – 65 year old league with 4 lockouts means we should have one every 16.25 seasons, 14 is less than 16.25) It’s not good. The main reason for the lockout is money. Money always seems to be a huge deal for everyone who does not live in a traditional economy nation / society. No doubt, it’s a huge thing for billionaires and millionaires to worry about. (If only I could be burdened with such problems in this lifetime . . . )

Money has the many facets. Part of it is the idea that you are paid for a service or talent. The better you are, the higher you should be paid. This is simple free market economics, I guess. Another way that money works in professional sports leagues is that a player who has performed their duty for years will get a huge bump in their contract values. Essentially, being paid for previous services. Lastly, some people are paid upon potential. I don’t need to say anything else except JaMarcus Russell – who for all long suffering Oakland Raiders fans like myself know can wreck your teams’ financial flexibility for years and years.

Some guys get paid crazy money because of their draft position. Some guys get a payday after their rookie contract is up. Yet others get theirs later on in their careers. I know he’s a player from a previous era – but let’s look at Karl Malone’s yearly salary over his entire career:

There are three main points to this graph. First, Karl had a very sensible salary for the majority of his career. Players did not make as much back in the mid 80s and early 90s, but things started to change when guys like Glenn Robinson got a $100 million dollar rookie contract, and Shaquille O’Neal went to the Lakers as a free agent for $120 million. Guys were getting paid. The second point is dealing with Karl’s huge raise. Malone’s big jump in salary came after the lockout year of 1998-1999 – where he went from $6.142 million all the way up to $14.000 million for the 1999-2000 NBA season. Karl Malone had two MVPs by this point in his career, and countless other awards. The third point is his immense pay cut to go play with the Lakers. I’m not going to talk much about that last season; as a Jazz fan, it’s not really for me to talk about anyway.

I did not find the data for his second and fifth seasons on basketball-reference.com, but I think the trends we can see of gradual growth and then exponential increases are obvious. This was the trend for almost all the big stars in his day as well. I think we can see the three steps in almost all the careers of players now. However, the big difference is how long each section is. A guy like former Michigan Fab-Five member Juwan Howard has been in Phase 3 for a long time, playing past his big payday and making much less than in his peak. The crazy thing is the escalation in both the size of the payday that today’s players get, and how quickly in their careers they actually get it. Check out how Karl’s yearly salary compares with some other Jazz forwards/bigs: Carlos Boozer, Al Jefferson, Paul Millsap, Mehmet Okur, and Andrei Kirilenko.

Obviously, none of these guys had as long a Phase 1 (the sensible pay increase years) section as Karl did. The Phase 2 (the big payday) is non-uniform for these guys (Big Al and Andrei were 1st rounders, Boozer, Millsap, and Memo were 2nd rounders) for a variety of reasons. Boozer and Memo both got their big paydays right out of their rookie contracts, in their 3rd years in the league. Paul Millsap got his payday in his 4th year in the league. Big Al? In his 5th year. And the much maligned Andrei raise? He got that in his 6th year. Andrei was also the best player on the team the last few years before he got his raise. Memo and Booz were RFA and the contracts had to be big enough to dissuade their draft teams from matching – but to be honest, both were question marks coming to Utah.

Of course, these numbers may not be completely accurate – I did scrounge around a few places (basketball-reference.com and shamsports.com for starters) for the information. Boozer’s money seems to go up and down, his last contract (which he signed last off-season) is way worse than Al Jefferson’s in my opinion. Big Al’s isn’t good, and he’s been making over $11 million a year since his 5th year in the league. And this next season (if there is a next season), he’ll make as much as Karl did after Karl had two MVPs and two gold medals. It’s silly to try to use guys from a previous generation as a frame of reference – but I don’t think you can completely lose sight of how far the Miller family’s money used to go. I can understand why the owners are upset.

Andrei seems to be the only guy out of the ‘active’ five players who is going into Phase 3 (the pay cut) with his next contract. He’s said as much – and we’ve figured it out to be a baseline value of at least $5 million USD per season. That’s almost a 75% paycut, and I think Andrei knows he was being paid too much over the last few seasons. Memo is the next candidate – especially with how his next contract will fully be a product of what the new collective bargaining agreement will say. Who knows what his market value is going to be – with who we have on the roster right now I am finding great difficulty in making a rotation that gets him on the court more than 22 minutes per game. I do think that his talent could still get him something in the $5-7 million range somewhere in the league (or world). So maybe he’s not going to experience such a huge drop in Phase 3 – partly because at his maximum he’s only making $10.8 million this next year.

Paul Millsap and Al Jefferson pose significant problems. No matter who is a better fit for whatever role, we can’t escape the point that Big Al is going to make $6 million more than Paul next year. Let’s put it this way, with crazy math – would you rather have Big Al, or Paul, Andrei, and a free agent 3rd string PG or C? I think Big Al makes a ton of sense for our team if Deron is on it, and we’re contending. It makes less sense for a lotto team to hold onto a super expensive non-All-Star (Big Al will make $15 million after this season). Financially, and I’m sure Greg Miller looks at things this way sometimes, I think the decision between Big Al and Paul may end up being made on the balance sheet, and not the basketball court. It’s not fair, and in an ideal world we wouldn’t have to make a decision right now. But I think the team will not finish next season with both on the roster.(Chris Forsberg suggests that the Boston Celtics should try to get Big Al back here)

Finally, I think Karl Malone is better than all of these five other dudes put together.

I’m working on something to post early next week … so no stats class.

Video of the Week:

Utah Jazz YouTube sensation memoismoney / prodigy is at it again with a sweet mix of Blue Edwards’ sweet music in a Jazz uniform.

Say what you will about his off-court international inter-racial Supreme Court paternity suit issues – he was a lot of fun to watch in a Jazz uniform. Thanks memoismoney!

Kevin Arnovitz wrote at ESPN about what a fully canceled season could mean for the NBA draft. I think we’re very interested in this, as Jazz fans, because right now we ARE a lotto team, and could have Golden State’s lotto pick as well. I think you should take a look at this, if you have not already. Why? Well, it doesn’t look that great for the Jazz – so we better hope for a season.

Mike Prada wrote at SB*Nation about how he ranks the current NBA Head Coaches. It’s a pretty solid list, however I would probably have put George Karl a few spots higher. Somehow Scott Brooks is still a Top 10 coach though. Which is absurd. It’s easy to look like a good coach when you have Kevin Durant, Russell Westbrook, James Harden, Serge Ibaka, Jeff Green, Eric Maynor and so forth on your team. Interested in finding where he ranks Tyrone Corbin? Click on.

Dennis Velasco writes for The Basketball Jones blog about the Top 10 frontcourt players on the ‘verge’. It’s an interesting thing to wonder about, and as a Jazz fan, that is to say: a team that’s put a lot of stock into the belief that one of our frontcourt players will be good, this is a very honest appraisal of what direction the league is going in terms of dynamic bigs. Well worth the mouse click.

If you’re not crazy like me, you may have missed Ron Artest going nuts about going to a Celine Dion concert. I’m not going to put any links here, but it’s a real thing. Amazing. 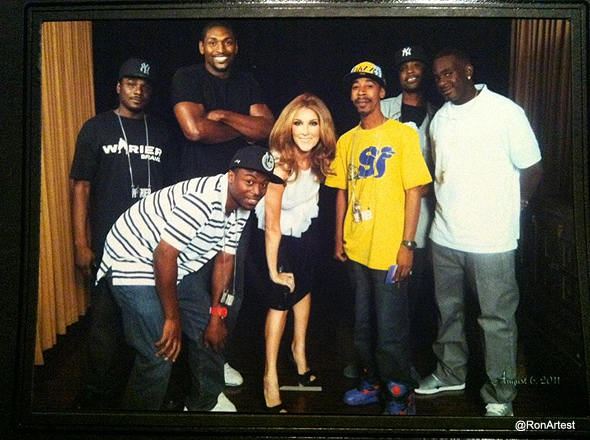 Jeremais Englemann is a monster. He was able to find a metric where Jarron Collins dominates – drawing fouls.

Kurt Helin writes at NBC Sports Blog about Enes Kanter. Right now we’re being bombarded with opinions on the young Turk, most of which are remixes of the good work that Sebastian Pruiti has already done. And you’ve already ready that already, so I don’t need to link to it again, right?

. . . that Adam Keefe was a Top 10 NBA Draft pick, back in 1992? I remember the Hawks drafting him and being impressed by his volleyball ups. (He was a two sport athlete at Stanford – his senior season had him beasting kids with 25 ppg / 12 rpg averages) Then I watched him play in his rookie year. Living out East, I got a chance to watch a lot more Eastern Conference games – I remember wasting a Friday night many years ago watching the Milwaukee Bucks (led by Blue Edwards) take on the Atlanta Hawks in a super quiet Omni. Keefe was never amazing. Probably the most amazing fact about Keefe is that Jerry Sloan started him 75 times on a team that made it to the NBA Finals back in 1997-1998.