Share All sharing options for: The SB Nation iPhone App Is A Go - The Downbeat - #562

Solid showing from Enes Kanter yesterday against New Zealand putting up 14 & 6.  I liked his D on the wing on the pick and roll.

Your daily lockout news...  What's amazing to me is the Stern quote where he drops the Eddy Curry bomb.  Owners want to be able to limit guaranteed contracts and be able to get rid of overpriced players.  That's all fine and dandy but not only were they the ones that signed the player to a bad contract in the first place, there's nothing stopping them from turning around and giving more obscene money to players that don't deserve it.  They want multiple get out of jail free cards.  As I've said before, there needs to be some sort of penalty for giving out bad contracts.

The good news is that they will be talking next week.

N.B.A. and Union to Hold Bargaining Session - NYTimes.com
Lead negotiators for the N.B.A. and its players union will hold a bargaining session next week — just the second since the lockout began — with an unofficial deadline fast approaching to save the start of training camps. Four people involved in the talks said the sides planned to meet in New York, although the day and the location were still being arranged. They might not be in a conciliatory mood when they arrive.

NBPA's Evans says players 'ready to negotiate' - CBSSports.com
"The guys are willing to suck it up as long as we have to in order to stand up for what's right and protect what all the great players who've come before us have fought for," [Union VP Mo] Evans said. "The Bill Russells, Michael Jordans, Larry Birds and Magic Johnsons have done great things to allow us to make the salaries we have and wear these great uniforms. It'd be a shame to give up everything those guys have fought for."

Stale contracts provide new ammunition in this NBA labor battle - The Washington Post
Cuban added Abdul-Wahad, the former player whose physical ailments sidelined him for a full two seasons while with the Mavericks, had a guaranteed contract of six years, $40 million. "And I’m stuck with that," he said, the participants remembered. A lawyer for the players’ union then shot back that J.J. Barea, an emerging spark off the bench for the Mavericks en route to their first NBA championship, was making a pittance of $1 million for his considerable talent. "How about that? You’re getting a bargain in a guy like J.J. Barea." Finally, NBA Commissioner David Stern could not take it anymore. "All right, you want to go tit for tat, I’ll go tit for tat," Stern said, according to the participants. "I’ll see you J.J. Barea and raise you Eddy Curry."

NBA Lockout: Union VP Says Decertification 'Not On The Table' - SBNation.com
Decertification is "not on the table right now", National Basketball Players Association vice president Maurice Evans told SI.com's Sam Amick on Wednesday. Decertifying the union has been considered a top option for the players' union as the NBA lockout drags toward its third month; the NFL's players' union decertified early in that league's labor impasse last spring. The NBA has sued the NBPA in federal court to block what it calls a "sham decertification", and has also asked for clearance to void all existing player contracts if the union is allowed to dissolve.

In NBA Lockout, Fans At Least Deserve Honesty - SBNation.com
There are two strains of dishonesty that had emanated from NBA talking points -- more specifically, Stern's talking points -- that stand out as egregious. The first is that the NBA identifies its last proposal as one that cuts player salary by only 8 percent. It does cut player salary by 8 percent ... in the 2011-12. But then it essentially freezes it there for a number of years, before allowing a modest increase based on revenue growth. It's decouples player salary from revenue, which is a magnificent shift at the expense of players. So classifying it as an "8 percent pay cut" is a gross misrepresentation of the NBA plan.

The SB Nation app is finally out (in case you hadn't noticed already).  You can get it at the app store right here.  While there's a ton of content, this is just getting it out the door.  More enhancements will come such as the comments section.  Right now you'll have just basic post and reply.  We've been pushing for more things such as checking in, uploading pics as FanShots, and refreshing comments like we have on the main site.  I don't know if/when those things will come out, but this is by no means a finished product.  I like it much better than the mobile version of the web page.

The Android app is coming by the end of the year.  There may be more Android phones out there now, but when this started getting developed, iOS was the majority mobile browser, so that's what they developed first.  It was also the most used mobile OS on the network.  Android has closed the gap now of course.  The good thing is that it may have some things that the iOS version doesn't have right now as the dev team gathers feedback.

So add SLC Dunk of course and all of your other favorite teams.

If you have issues/suggestions with the app, email support@sbnation.com.  Here are some FAQs since this morning's release. 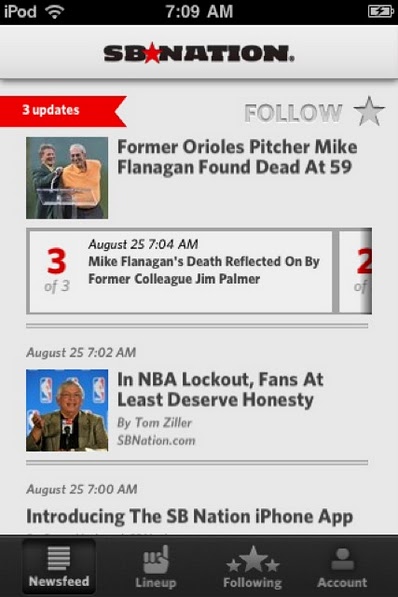 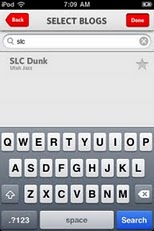 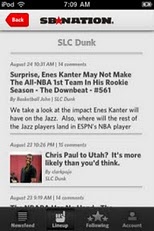 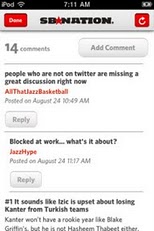 Even though the Jazz picked up CJ Miles' option, his status with the Jazz is up in the air.  As you might have heard, the owners have locked out the players and we may or may not have a season.  Didn't know if you knew that or not.

Because of that, CJ's final season with the Jazz may have already happened.  If the season gets wiped out, that's bad for a lot of reasons of course.  For CJ though, he becomes an unrestricted free agent.  Without a season though, he will have lost the chance for his proverbial "career year."  He won't have a stage in which to showcase his skills.  So while there haven't even been rumblings about CJ playing overseas, he might be a good candidate to do so.

I don't know how CJ is doing financially, but he's one that isn't getting large sponsor money or income from anything else.  CJ could be one of those players that needs some income.  He does need to play this year in order to show teams what he can do.  Otherwise, his perceived value may drop and he's going to get less money than he would have next season.

If you haven't watched Arrested Development, then this won't make sense.  If you haven't, head to Netflix and start watching. 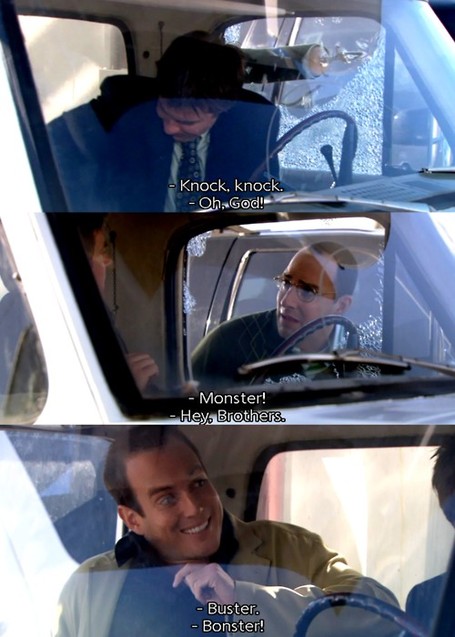