Share All sharing options for: Where Do The Millers Stand? - The Downbeat - #550

This is an excellent question by Andrew A. McNeill from 48 minutes of Hell

Some NBA owners want the lockout to end sooner rather than later, which side is Peter Holt on?

He's references this article from The Oregonian which states,

Ominous news over the weekend. Multiple NBA sources whispered that there was a contingent of league owners eager to get a collective-bargaining deal signed, and a second, determined to drag the lockout into January or beyond, because they believe the league needs rectify a broken salary system at all costs.

So the question as Jazz fans is, "What side is the Miller family on?"

On one side, the Jazz have a very young team with a ton of potential. A year lost in their development wouldn't be good but would hardly break the franchise.

However, if the numbers are as bad as the owners say they are, then for a team like the Jazz, not getting a radically different deal could hurt the team in the long run. They're one of the few small-market franchises that have paid the luxury tax. That's something that Larry H. Miller vehemently opposed. Greg however has been willing to pay extra in order to keep marquee players and bring on additional players in order to make the team competitive. If those moves don't pan out though, like last season, that's a big hit for a team like the Jazz to take.

So where do the Millers stand? Even though LHM is gone, they're part of the old ownership group as opposed to the owners that have purchased teams in recent years. The Jazz could sell the team right now and make a handsome profit. They're not going to do that of course but they're not looking to make money off of their initial investment like some of the new owners are.

My guess is that while the Millers want to ensure the stability of the team and would welcome some overhauls to the system that would benefit small-market teams, they would much rather move forward with the season. They're actually in a good spot financially. After this season, they only have $41 million committed and that's under the current system.

It would be interesting to know what part Greg Miller is taking in relation to the other owners.

The Koof got called for a flagrant foul on Russia.

Of course I didn't take that to mean a foul on the Russian team but a flagrant on the entire country.

Your lockout articles of the day

Lockout not dimming future for Team USA at 2012 Games | NBA.com
A source who deals with owners on a regular basis said that they remain determined to, if not break the union, break its current salary structure. The source said owners frequently speak of "being tired of making these guys rich" and are even contemplating asking for more, such as including income the players receive from their commercial endorsements and sponsorship money into the BRI pot -- the theory being the players wouldn't become famous and able to make such deals if not for the NBA infrastructure that puts them on television and other media. (Good luck with that one. And, yes, I asked my source if that were the case, why not cut players in for a slice of the action when owners sell their teams? I got something about there being a difference between the risks the players assume on the court and the risks owners take in financing their teams, got a headache in my eye and stopped listening.)

Players leverage? Try a breakaway league with NBA's All-Stars - NBA - CBSSports.com Basketball
What if the top 25 or 30 players in the NBA -- All-Stars and others deserving of that status -- announced their intention to form a rival league? On many levels, it's even more of a pie-in-the-sky dream for the players than getting a few million dollars from overseas teams. But short of a legal shock to the labor negotiations -- for example, the issuing of a complaint against the NBA by the National Labor Relations Board in the next 60 days -- it's difficult to imagine a more effective leverage play than a breakaway league featuring the biggest stars in successful markets.

Buying Into A Failing League: How Atlanta Hawks' Sale Uncloaks Stakes Of NBA Lockout - SBNation.com
On Sunday, the identity of the secret Atlanta Hawks bidder was revealed as California businessman Alex Meruelo, a 48-year-old whose made his mark with a Latino-focused pizza chain, a Spanish-language TV station and a casino in Reno. In other words, his history is a bit different than, say, that of Ted Turner. Of course, the NBA lockout is still on. It's more "on" than ever: there has been one bargaining session in 38 days since the lockout began, and that simply preceded a federal lawsuit filed by the NBA which alleged bad faith. The NBA owners still claim they need a reworked system that ensures profitability; the NBA players are still unwilling to hand over a substantial portion of their future paychecks because some owners made bad decisions (either buying into the league or paying the wrong players). Alex Meruelo's entrance will not help one little bit of this.

Rookies taking loans to survive lockout - CBSSports.com
You've worked your tail off on the court and in training since high school. You played well enough to be considered a draft prospect. You dealt with the draft workouts. You made it through the nervousness of where you'd go. You were finally drafted, a dream come true. You're an NBA player, and along with that comes the perks, like millions and millions of dollars to change a life of just getting by you've known your whole life. Then you're locked out, and you don't get a cent.

How The NBA's New Money Changes Everything And Nothing - SBNation.com
That's the question that will truly decide how this new crop of ultra-rich owners affects the NBA, and I fear we're getting our answer right now: profits and losses still matter ... a lot. Right now, NBA franchises are good value buys that run the risk of annual losses. You don't "win" in many markets until you sell. Instead of accepting that, the owners are pushing to eliminate even that comparatively small risk and make owning an NBA team lucrative in the small and long terms. Owners don't want to sit on their investment and watch its value grow over time. They want to extract an annual income in addition to that.

Here's a complete list of Tom Ziller's "This is why we can't have nice things." No AK sighting yet.

Tuesday poll... Which is more hardcore/hipster? From Deadspin, 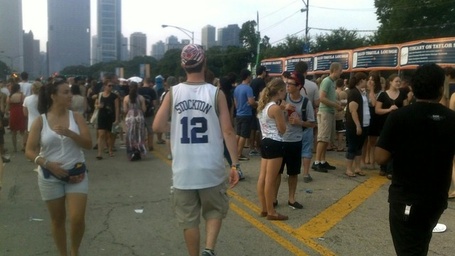 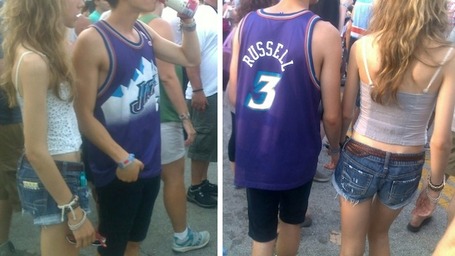