Share All sharing options for: A Meeting About Nothing - The Downbeat - #567

ESPN has the 5 on 5 up today on the Utah Jazz.  Before you head over there, here are the five questions.  Write down your answers first, and then head over there to see how yours compares.

1. Fact or Fiction: Dealing Deron Williams was the right move.

2. Fact or Fiction: It's time to say goodbye to Andrei Kirilenko.

3. Who should start in the Jazz frontcourt?

4. Fact or Fiction: Alec Burks will be better than Jimmer Fredette.

5. Fact or Fiction: Utah has the brightest future of any lottery team.

My responses will be after the jump

So the NBA and head NBAPA met yesterday and tried to keep things under wraps.  The media did find out about it of course and after 6 hours of meeting, the NBA and NBAPA were tight-lipped about the whole thing other than to say they weren't going to bash each other in the press anymore.  Great, where was this two years ago?  Other than that, it seemed it was a big meeting about nothing.

Despite trying to keep it secret, I was able to get this snapshot of the meeting 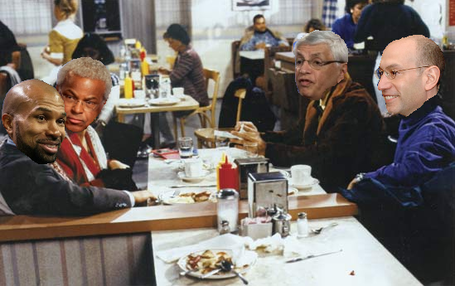 Andrei Kirilenko and Kyrylo Fesenko in Russia vs. Ukraine (Aug. 31, 2011) (via jazzfanatical)

There hasn't been much news on our 2008 draft picks, Tadija Dragićević  and Ante Tomić.  It doesn't appear that Dragićević is playing in Eurobasket.  Tomić appears to have put up 14 & 8 though for Croatia in their match against Finland yesterday.

From Kurt Helin at ProBasketballTalk

Should the Jazz move away from Sloan’s flex offense? | ProBasketballTalk
In reporting that Jeff Hornacek is going to meet this week and re-sign as an assistant coach with the Jazz, Brian Smith of the Salt Lake Tribune put out this interesting tweet:

It’s an interesting idea. The strength of the Jazz roster right now is a front line of Al Jefferson, Derrick Favors and rookie Enes Kanter.

Favors will become the centerpiece of the offense, if there is one.  I think we're going to see a lot more options thrown in for him.  But there's no way that Corbin goes away from the flex completely.  That's what he cut his teeth on.

What I'm hoping for the most is that the Jazz focus on highly efficient shots, namely three-point shooting and getting to the free-throw line.  They have the big men now that will draw double-teams.  We need to have snipers that can knock down those shots from behind the arc.  Hayward has shown promise and hopefully Burks can develop his three-point shot with the tutelage of Jeff Hornacek.

1. Fact or Fiction: Dealing Deron Williams was the right move.

There is only one response to this and that is, "it depends."  If the Jazz had knowledge that Deron was going to leave with a certainty, then it was the right move.  They got a great package for him and sold high.  Had they waited, they could have lost out on the chance to deal him altogether (lockout) or would not have received as much and would have had to go through what Denver went through last season.

If they were just going on a gut feeling, then this is a really bad move.  For Utah, you don't land top ten talent except through the draft.  If you're trading a perennial All-star and a All-NBA first or second team member, you've made a bad choice.

2. Fact or Fiction: It's time to say goodbye to Andrei Kirilenko.

Fiction.  Have you seen what he's doing in Eurobasket right now and what he's done in years past?  It just goes to show what he can do when he's given an integral role with a team.  He can do that for the Jazz and will be much, much cheaper.  He need to be with the team next season.

3. Who should start in the Jazz frontcourt?

This is directly related to question number one.  The Jazz are in rebuild mode.  We've talked about this already.  When you trade your top player for a rookie and draft picks, you need to play that rookie.  Derrick Favors needs to be starting and needs to be developing.  Enes Kanter doesn't have to come along as quickly because he's not as NBA ready as Favors.  That means that Al Jefferson or Paul Millsap will have to either be traded or come off the bench.  That means we should have a front court of Jefferson, Favors, and Hayward.

4. Fact or Fiction: Alec Burks will be better than Jimmer Fredette.

Better is a subjective term.  Both of them will fill different roles and needs for their respective teams.  If you weigh things by looking back in 2-3 years and wishing that we had drafted Fredette instead of Burks (even though Jimmer wasn't available at 12), then I think it will be a win for Utah.  Not that Fredette will be that much worse than Burks, only that Burks will have fit in better and been more of the player that the Jazz need.

5. Fact or Fiction: Utah has the brightest future of any lottery team.

It's hard to argue against some of the ESPN commentary on preferring the Clippers roster.  If they were to land Chris Paul or Deron Williams, they would be scary.  As of right now, the Jazz might have more overall potential, but for now that's all it is.  The Clippers have some established young players and would be the safest pick going forward.  I'm also interested in seeing how Minnesota evolves.  With Rubio coming over, drafting Derrick Williams, and having an established stud in Kevin Love, they're looking good as well.