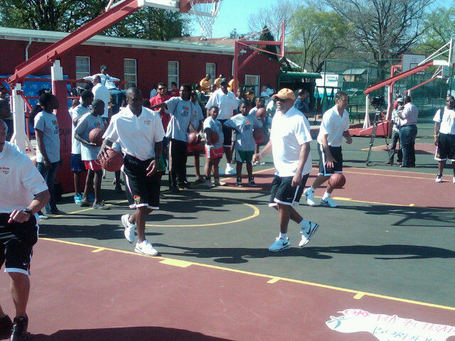 NBA's Basketball Without Borders Focuses On More Than Just The Sport - Andrew Feinstein
Watching these 60 eager campers here in Johannesburg, I ask myself: who among them will become a member of that special fraternity of NBA some day? Who among them will build friendships with fellow players from the other side of the globe and give back to the game, give back to their communities? Who among them will be back at this camp 20 years from now sharing their life story about how basketball gave them the tools to become not just a successful athlete, but a successful human being?

NBPA president Derek Fisher -- who was joined by Stern, deputy commissioner Adam Silver, Spurs owner Peter Holt, NBPA executive director Billy Hunter and union counsel Ron Klempner in the meeting -- told reporters on Wednesday that "both sides [are] feeling a sense or urgency" to get a deal done.

How The Last NBA Lockout Changed The Game For The League's Middle Class - SBNation.com
It's a bit more eye-opening when you drill down further. Sixty-five players, or 15 percent of the league, made more than $10 million in 2011. Their combined salaries constituted 42 percent of league payroll. But just as was the case in 1998, there were only a couple of $20-million players in 2011. A huge chunk of 2011 salary in concentrated in players making $10-20 million, a population that was (by comparison) nonexistent in 1998, where you had tip-top superstars and everyone else. It's not just the "middle-class" that is making more money at the expense of superstars -- it's a lot of the mid-rung stars too.

In NBA Lockout, Is It Up To David Stern Or Players To Budge? - Tom Ziller
Progress. Incremental, not wholly apparent. But it's progress. Yep, you know you're in trouble when the league you love can count a meeting in which no one got sued productive. One of the themes hanging over the lockout over the past couple weeks has been the idea that it's up to players to make concessions at this point. Sam Amick of SI.com had the most comprehensive explanation as to why this should be the case a bit more than a week ago.

With the immediate future of the NBA in doubt, we look to the past this off-season. Let's reminisce on this Phil Taylor piece on game 4 of the 1997 Finals.

John Stockton's court savvy helped the never-say-die - 06.16.97 - SI Vault
It's fitting that the Jazz point guard, the NBA's alltime assist leader, won the game not with a shot but with The Pass. Stockton, who finished with 17 points and 12 assists, sneaked near the basket, grabbed the rebound of a Jordan miss, turned and fired the ball down-court. For a moment the Delta Center floor became a football field, with Stockton the quarterback, Malone his intended receiver and none other than Jordan playing free safety, racing to get to The Pass before Malone did. To describe it as a risky play is like calling Jordan a fairly decent leaper. "Would I have made that pass?" Jazz forward Bryon Russell asked rhetorically afterward. "I'm not John Stockton."

Stockton realized the danger in the play even as he was making it. "If you could have suspended time right then, when the ball was in the air," he said, "[Utah coach] Jerry [Sloan] probably would have strangled me."

Fess gets his own #BoomBitches moment yesterday against Slovenia courtesy of moni. This comment though bring back memories of watching the Jazz on a 19" TV in the 90s:

The negative side of Kanter being without knee pads is that it made it way harder to pick him out when the camera was zoomed too far out. (FYI, I look for floppy hair in Russia's games, the largest man on the court in Ukraine's games, knee pads in Turkey's games, and the combination of bald spot and beard in Greece's games.)

It was a near impossibility to distinguish Stockton and Hornacek on TV if it was in a wide shot. It was even more impossible to tell them apart if you were playing as the Jazz in a video game. Here's what it was like:

Thankfully, Hornacek started wearing a knee-brace, you know, for our benefit. You kids and your HD. Why are you still on my lawn?