Ballin' in Europe has a great breakdown on why players heading overseas to play aren't exactly playing for peanuts.  The reported figures that players like Mehmet Okur and Deron Williams are earning are net figures -- which means after taxes.  Both of those players are earning $3.5 Euro net this season playing in Turkey.

Now the key is to use the formula that NBA agents use for converting this into the equivalent salary in the NBA. They use 1.42 as a yearly average to convert euros to US dollars and a 2.0 mark is employed to convert the salary into gross income terms (again, before taxes), as NBA contracts are listed in gross terms. European contracts are listed in the amount of money earned after taxes are deducted, and the European clubs also cover tax and accounting fees for the players.

So, you take the net euros income and multiply by 1.42 for average yearly conversion into US dollars and then by multiply by 2.0 to figure the net income difference as opposed to gross income contracts like in the NBA.

So after all that, Deron and Memo are making about a $10 million equivalent NBA contract.  For Deron, that's a bit of a dip but it's not the relatively paltry sum that it seems.  Memo is making what he would take home from the Jazz this season.

Gordon Hayward explains why you're seeing no defense in these summer league games.  From the Washington Post,

"The best thing about games like this is that all the guys realize you have careers," former Butler star and current Utah Jazz player Gordon Hayward said. "So we're not going to do something stupid."

Nothing earth-shattering there.  Nobody is going to risk serious injury by D'ing up much.  That's how you can get scores like 170-167 when the Goodman League went up against the Knox Indy Pro-am league.  Hayward put up only 20 & 10 and is seen pretty much just running up and down the court in this highlight video.

Indy Cornrows had this to say about his play,

Another fun matchup to watch was Paul George on Gordon Hayward. They made acquaintanceds in their rookie year if you remember with Hayward flushing one on PG at Conseco Fieldhouse. Tonight they had several possessions in which they went at each other which I would say finished in a push. It was nice to see George knock down some open shots. He also had a couple of sweet, high-flying finishes at the rim. Hayward finished with 20 and 10 while PG had 24 and 11.

As much as I love summer league stuff, it's getting old now.  Training camp should be starting right now and we should all be getting into pre-season mode.

Rockout with your lockout updates:

Sources: Owners' offer still below 50 percent - CBSSports.com
It is both curious and an inevitable function of the calendar -- the league is still three weeks away from having to cancel regular season games -- that the owners emerged from a series of productive bargaining sessions and a full Board of Governors meeting to present a BRI split that still has the players receiving less than half of the league's approximately $4 billion in revenues. After NBPA executive director Billy Hunter stated his intention to go below the union's previous offer of a 54.3 percent share for the players, Stern and Silver acknowledged that an agreement on the economics was within reach.

Go Ahead, NBA: Make Yourself Irrelevant - SBNation.com
The NBA as a company is not special. Owners need to realize that it's the players we're after. Team owners deserve to make a profit off of their investments, but using the fans as hostages will not be tolerated. A lockout that bleeds into the season is not a necessary evil to keep the league solvent. It will do the opposite. It will prevent the league from reaching its potential, and it will alienate the fans who would otherwise help the league get there.

NBA Lockout Update _ The Mid-Level exception
Chris Sheridan and I have agreed all along that this wouldn’t be the disaster forecast everywhere else, with the sides within striking distance of a deal… if they would ever start dealing with each other. Insiders have long said Stern really wants a 50-50 split, up from his owners’ 43 percent in the last deal. The union is down from it’s current 57 percent share into the 54s — seeming to signal it would drop into the 52 range. You’re telling me grown men are going to war if they can’t figure out how to close a four-point gap?

Working on a little something,  Yes or No? 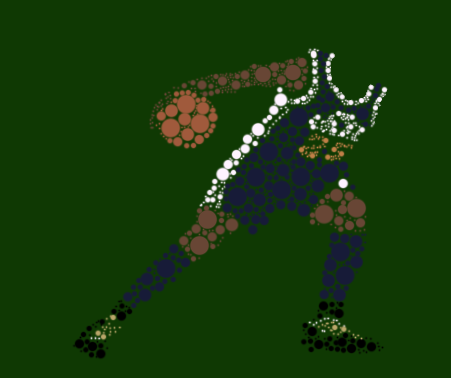 It's not intended to be a Jazz-themed color-blind test.  I was going to work on one of these for each of the players.  Thoughts?

From the Simpsons lat night (click for the .gif).  Apparently the writers don't keep up on things like number changes.  Still works for me though.