Share All sharing options for: Can The Mailman Save The USPS? - The Downbeat - #586

The big quote from yesterday's meeting between the players and the league was a classic David Stern,

Let's get the two committees in and see if they can either have a season or not have a season. That's what's at risk this weekend.

Bluffing?  Probably.  There's nothing for the league and its owners to gain from cancelling the season come October 1st other than additional leverage.  It's just another sign of disrespect that Stern has shown to the players over the past two years.  He's essentially saying that negotiating is done and that  the owners are willing to take a huge public relations hit in order to get what they want.   It's also a big middle finger to fans, as if you haven't gotten that feeling already.

I don't know if the two sides will be closer than they are now in getting a deal done.  As most outlets are saying, if it doesn't get done this weekend, then things get really nasty.  You have the National Board of Labor decision coming shortly.  That may be one reason why Stern is making this statement.  If he's anticipating an unfavorable ruling, this would be a last-ditch effort to pressure the players to come to terms.

So either way, we should have a better idea as to where the season is heading tomorrow or Saturday.

More lockout news and quotes after the break.

The Post Service's failures are your benefit.  The USPS announced that due to losing money hand over first, they've decided to change their policy and allow living people to be featured on stamps now.  They're hoping this spurs collectors and grandmas to buy them up.  Don't call it a comeback yet, but if Blockbuster can somehow come back after Netflix had them on the ropes, and if the Rays can overcome a nine-game deficit in September and a seven-run deficit last night against the Yankees, then maybe the USPS can come back.

Who else to put on one of those stamps than the most famous Mailman -- outside of Newman -- the world has ever known as was talked about here,

A few weeks ago I was asked to join the 21st century and open a Twitter account. When I tweeted Tuesday morning that Ali would be my first choice for a stamp of a contemporary sports figure, I received a reply from a person I don't know, a young man named Travis Land.

"Ali? Come on," he wrote on his Twitter account. "The first stamp should go to the Mailman, Karl Malone."

Neither rain, nor snow, nor sleet, nor hail shall stop me from acknowledging Land's slam dunk of a tweet. I've been posterized.

I don't know if Malone should get on a stamp ahead of Ali, but he should definitely be one one.  Maybe like this: 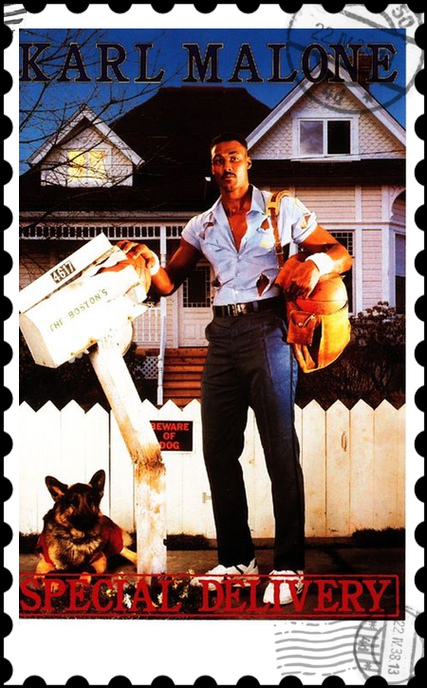 Golden State of Mind has an excellent look at last season's finishers around the basket. Several Jazz names cam up on those lists.  For the top 30 dunkers per 100 possessions, nobody from the Jazz made the cut.  That should be too surprising other than Jeremy Evans seems like an obvious oversight.  They may have had a minimum number of field goal attempts, but he was one of the dunkiest players in the league last year when looking at dunks and field goal attempts.

So from those numbers we can tell that a high percentage of attempts for Harris and Millsap come in the lane.  Millsap finished better in that regard and that should be expected given his size.

We can also see that Raja was never the slasher that we've come to expect from the player at the two.  He's always been that type of player, attempting most of his shots from 16+ feet.

And, at least every Jazz player attempted at least one dunk.

Kirilenko breaks into the top 100 of ESPN's Player Rankings at #90.  By my count, that leaves Paul Millsap and Al Jefferson remaining.  Where do you think they fall?

Thursday open poll...  If the CBA gets resolved this weekend and we have two weeks at the end of the month for free-agent signings, trades, etc., do the Jazz do anything besides sign their two rookies and sign two free agents to fill out the roster?

NBA Lockout Talks Have Included Salary Rollback Proposal, According To Report - SBNation.com
Ken Berger of CBS Sports has covered the NBA lockout like a fire blanket, and he's got quite an interesting nugget in the aftermath of Wednesday's talks: part of the league's conceptual proposal offered on Tuesday included salary rollbacks for players under contract.

Kobe Bryant, LeBron James called to NBPA meeting on Friday - Sam Amick - SI.com
Two sources close to the situation confirmed Newsday's report that the National Basketball Players' Association has asked stars like Kobe Bryant, LeBron James and Kevin Durant to join the efforts on the public front by meeting in New York on Friday. The rank-and-file players are expected to be represented as well, with one source saying that NBPA executive director Billy Hunter wants "as many guys there as possible." The negotiations are also expected to continue on Friday, with as many as 15 owners reportedly planning to attend the next session.

NBA lockout -- David Stern to threaten cancelation of season, sources say - ESPN
When NBA labor talks resume Friday, NBA commissioner David Stern is planning to threaten players with the cancellation of the entire 2011-12 season if the sides haven't made major progress toward a deal by the end of the weekend, according to sources close to the talks. Although sources said the union views such an extreme stance as more of a negotiating tactic than a legitimate threat, Stern went almost that far in his comments to reporters in New York on Wednesday after a second straight day of negotiations.

NBA denies David Stern plans to threaten NBPA - CBSSports.com
USA Today reported Wednesday evening that Tim Frank, a spokesperson for the NBA, said that the report that Stern has plans to threaten to cancel the entire season is "simply not true." Meanwhile, SI.com reported on Wednesday that Stern "originally told the union that Jan. 7 was the date by which he would have to cancel the whole season."

David Stern's scary talk - TrueHoop Blog - ESPN
Stern has assessed it's deal time. In other words, he likes his negotiating position now, and is genuinely happy to have everything come to a head immediately. People who do lots of deals talk a lot about the importance of recognizing deal time when it comes around. What better card to play to sharpen everyone's focus this weekend?

NBA Lockout Update: Where The Settlement Lies - Chris Sheridan
NEW YORK — From what I can gather, it is looking more and more like a deal is going to be cut in the 51/49 or 50/50 range when it comes to the split of basketball related income. It’ll probably take the sides a couple of days to get to that point when negotiations resume Friday, with the owners currently offering only 46-48 percent (down from 57 percent in the last deal) and the players at 54 (but having shown a willlingness to drop to the 52 range).