Share All sharing options for: You've Gone Too Far NBA Lockout! - The Downbeat - #587

Now this lockout has gone too far. We've sat idly by talking and reading and complaining about the lockout with no real consideration for what's really at stake. Now it has gotten personal. KSL.com had another take on the economic impact of losing games on the downtown Salt Lake City area,

When the Utah Jazz play a home game, Mike Katsanevas, whose family runs the Crown Burgers restaurant on North Temple, knows it's going to be a busy night.

"From 5:00 p.m. to about 6:45, we get a major rush" just before the game tips off a block away at EnergySolutions Arena, he says. "It's tremendous business for us. We live for the Jazz season. That's our biggest time of the year."

This has gone on long enough. When the owners' actions affect the restaurant that makes this sweet, sweet creation, you've crossed the line. If you want to fight over BRI split, Bird rights, and a hard/soft caps, knock yourself out. But if you adversely affect Crown Burger, there will be hell to pay! 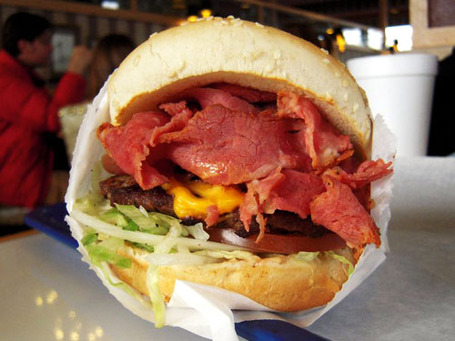 via David Kover, A Hamburger a Day

Forget sending the owners and players a cake, Crown Burger for everyone would solve all this right now. Maybe instead of the 46/54 split the owners are looking for, maybe they would take 50/50 and weekly Crown Burger catering?

Paul Millsap on the All-Jumper team (bench) from Zach Lowe,

His elbow jumper is near automatic. His biggest improvement from previous seasons was that consistent jumper. From 10-15 feet, he shot 51.6%.

Players and owners continue to their negotiations today which hopefully last long into the weekend. There's a myriad of items they'll be discussing, but hopefully they'll have the basic tenets of a deal in place in time to save the season. Some items to be discussed today and other lockout news:

David Stern Steps Up, And NBA Lockout Feels The Wrath Of A Menace - SBNation.com
There's one big elephant in the room when you start talking about this type of "rollback," one that comes in the form of a shortened season. That's the national TV contract, which pays out $900 million whether there's a season or not. In the NFL lockout, players tried to get that revoked from the league. The NBA's players' union hasn't made any similar move. So teams will start getting their $30 million share from the national deals with ESPN, TNT and ABC in the near future. Forget that team owners are typically invested in other businesses, that $30 million per team itself is a nice buffer between the owners and pain. Chunks do get taken out of it, though Most teams are continuing to pay their coaches, front office staff and sales teams and most teams have big fat interest payments to make on account of financing the purchase or operation of their franchises. So the buffer is not great, but it exists.

Nowhere in sports is the superstar more vital than basketball, because the ball’s forever in the star’s hands and a singular talent has the most transformational impact. Let owners bid on the true value the elite stars bring to a franchise, to the league, and Wade was asked where he believes the bidding would rise per season? "I’m sure it would get to $50 million," Wade told Yahoo! Sports on Wednesday afternoon.

The next stop for Kobe was the final of a Nike tournament for amateur basketball players. He was accompanied by Turkish star Enes Kanter, who was drafted by the Utah Jazz in the 2011 NBA draft.