Share All sharing options for: Andrei Kirilenko Drops His Business Card - The Downbeat - #569

First off, good luck to Chris Sheridan who has left ESPN and started his own site, SheridanHoops.com.  He's got some other names coming on board in the coming weeks.  I'm looking forward to what he puts out.

His first post is an interesting take on how the players and owners are a lot closer that you might think,

[I]f you look at the six-year deal the players have proposed, which includes $500 million less in annual revenue (than what they would have received under the old deal) over the six upcoming seasons, the simple math tells a different story:

Over those six years, the difference in proposed revenues that would go to the players adds up to $2.97 billion.

That is still a significant amount of money, but it is nowhere near as significant as what is being put out there publicly.

Or to put it another way, in a business that brought in $4.2 billion in revenues last season, the sides are only $170 million apart for next season.

That $170 million is just 4% of the pie which certainly does make things look much closer.  If you were haggling over your $50k salary, it would be the equivalent of a $2k difference. Now, $170 million is still $170 million no matter what percentage you're taking about.  Compared to the billions that have been thrown around though, this definitely seems like a more manageable situation.

Sheridan also gives his drop-dead date of October 1st for not losing any games.

They're set to meet tomorrow.

While the lockout rages on though, we will have some NBA-type basketball as the Impact League is set to kick off this month.  It will feature all NBA players which will feature 8 teams comprised of 7-8 players each.  We could learn the full rosters today.

Not only that, but we could see some regional barnstorming teams form.  Indiana could form a team which would of course include Gordon Hayward (h/t 8P9S).  Utah might have a tough time rounding up a team though given that Devin Brown was the last player to play in the NBA that was born in Salt Lake.

Now, if Georgia wanted to throw together a team, they could be formidable, on the inside at least.   Georgia would boast Dwight Howard, Derrick Favors, Al Thornton, Josh Smith, and JJ Hickson.  They would have Al-Farouq Aminu and Toney Douglas in the back court.  Javaris Crittendon would be out though.

Turkey and Russia both advanced in Eurobasket over the weekend (Ukraine was weak and did not make it).  Kirilenko and Kanter didn't have their best stats in their final games but both have played well in the first round.  As usual, make sure you're reading moni for videos, updates, etc.

AK talks about Russia's close matches so far in the tournament,

The one from this year has a lot of young players that are still developing and gaining experience, but they are still great players who want to learn and become better.

EuroBasket is really a great field for them to do that because the level is very high and it's very demanding also in the national level."

Targeting the title again might be a bit too early, but for a team that won only four years ago, Russia can't settle for less than a good performance again.

"We're a defensive oriented team and it's our business card," he explained.

"If we want to win games here that's what we need to do, and that's the only way we could beat Slovenia and roll on from there." 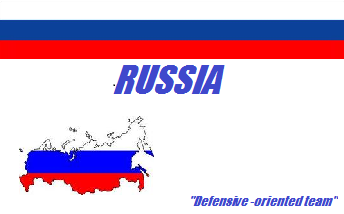 Here is a great stats breakdown of the tourney so far.  Enes Kanter has been efficient offensively, scoring at a great rate in relation to his usage.  Directly above him?  Ante Tomic.

Can anyone 1-up this Jazz tattoo (besides AK)? 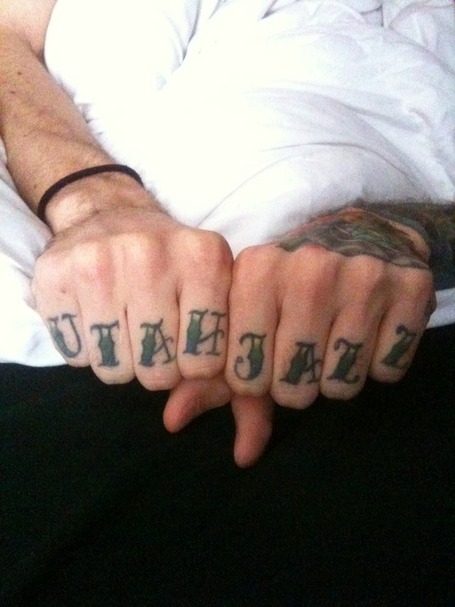 Tuesday open poll...  Once things are resolved and the league spins up, what free agents should the Jazz try to sign?  Remember, they have just nine players under contract right now with two rookies signing.  That means they'll need to sign at least two more players to meet the minimum roster requirements.  A lot will depend on the new CBA of course.

So what two should they get?  Do we bring back Watson (probably).  What are the team's other needs right now?