Share All sharing options for: Roger Mason Jr. And the Case Of 40404 - Not Found

So a few hours ago, Player Union VP Roger Mason Jr. cause a bit of a storm on twitter when immediately following the players' meeting with the league, he tweeted this:

via Eye On Basketball from CBS Sports

Of course as has become custom with inadvertent tweets, Mason claimed that he was hacked and that he never said that.  Exactly zero people believe him.  It was a complete damage control reaction and rightfully so.  The league and owners have stated that they're not going to reveal many details of their meetings.  He had to delete.  However, the damage was done.  Whether he was silent on the subject or claimed to being hacked, it was a legitimate inside look at how things are going in negotiations.

Thankfully, Eye On Basketball got a screenshot, because it reveals everything.  The twitter web client and most third-party clients reveal where tweets originate.  Most of Mason's tweets from his timeline are from either his Blackberry or from the web interface.  The tweet in question however was sent via a text message from his cell phone as you can see above.

The only way you can tweet via a standard text message from your phone is by setting up your cell phone number in your Twitter account: 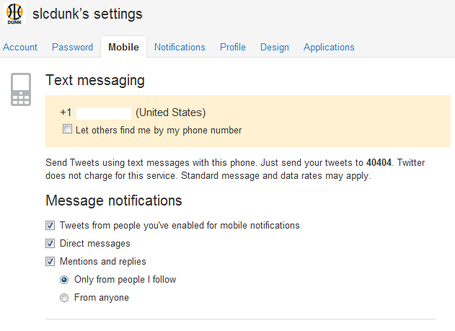 If someone did indeed hack his account, they would have had to put their phone number in here and then send the message to 40404.  I'm guessing that if we were to get a peek at his settings, we would find his phone number in there.

So how would he text that message to Twitter inadvertently?  If you're set up to receive these texts, they come from 40404 and will show you DMs (direct messages that only you can see), when someone mentions you (he likely has this turned off given that he gets a lot of mentions), and from certain users that you choose to get notified.

If you reply to 40404, it goes live as a public tweet.  If you prepend your text with the letter "d" and then the username of the person who DMed you, you will reply as a DM.  Since his tweet doesn't have a "d" in front (a common mistake), and he doesn't mention any particular username, it's likely that he just saw the DM message and replied as he would a regular text message.

I've made this mistake a few times, tweeting something publicly that was either supposed to be a DM or to another phone number.  It happens.  That's likely the case here.

My best guess, based on the content of his tweet, is that he received a DM from someone asking how the meeting went and he was replying.  I checked his replies and mentions to see if someone tweeted him publicly.  There was nothing.

That gives us a bit of a clue as to whom he was trying to text if we assume he was replying to a DM.  With Twitter, you can only DM someone that you follow and that follows you back.  So that narrows it down to those people he is following.

My best guess is that he's trying to text another NBA player, his agent, or perhaps someone in the press.  There's a slew of players that he follows including Kevin Durant, Carlos Boozer, Metta World Peace, Tyson Chandler, Shaq, and others.

His agent, Mark Bartelstein, doesn't follow him with this account or with this one.  So we can probably rule him out.

As far as the press goes, he follows Ken Berger (CBS), David Aldridge (NBA), ESPN, the WSJ, Marc Stein, Chad Ford, and Art Garcia, among others.

So which of those nearly 300 people was he trying to tweet?  I'm reading way too much into this but he doesn't appear to be texting someone close or someone that he would communicate with frequently.  It's someone that he's familiar with though.

My bet would be that he was trying to text another player, giving them an update on the progress of the meeting. That seems to be the simplest solution. The next likely scenario was that he was replying to an inquiry from the media.  Ken Berger (kberg_cbs) would be a good bet there given his penchant for insider information.  Was Matt Moore (CBS Sports) trying to contact Ken about it with this inadvertent tweet?

All of this is speculation of course on whom he was trying to contact.  What I do know though is that he was not hacked.  This is good news.  From this tweet, we get a little hope that the season won't be wiped out, at least not all of it.  Here's to hoping for some more hacked tweets.