In this new ongoing contribution to SLC Dunk I'll be breaking down the Offense and Defence of the Jazz. This piece highlights a single play run by the Jazz during the Lakers game of January 11.

The Jazz are renowned for their baseline inbounds plays. No less than Hubie Brown said that under Jerry we were the best team in the league at running plays to get open shots from inbounds plays, and they have been that way for many years. The good news is that under Coach Corbin this shows no sign of changing. After the jump I'll break down our first quarter inbounds play against the dreaded Lakers.

Late in the first the Jazz found themselves with a baseline inbounds opportunity after a discombobulated fast break by Josh Howard. The 5 on the court are Earl Watson, Howard, Gordon Hayward, Derrick Favors and Al Jefferson. The Jazz set up the play like this: 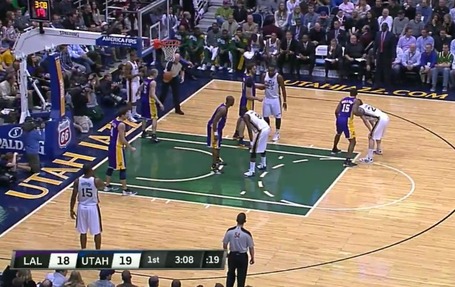 Earl is inbounding the ball and being guarded by Steve Blake, Favors is in the left corner, Howard is in the middle of the key, Al is facing Josh in the right block and Gordon at the right top of the key. The trigger for the play is the ref handing the ball to Earl; as soon as he does that Gordon fakes cutting right, then cuts back left down the key. Howard is watching the ref for movement too: as soon as he sees the ball going to Earl he moves up to set a screen. 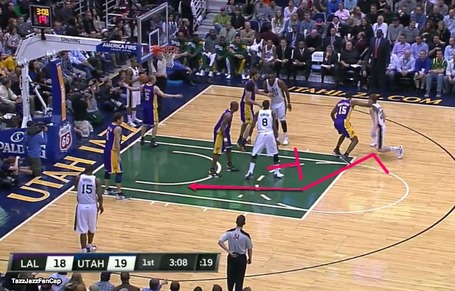 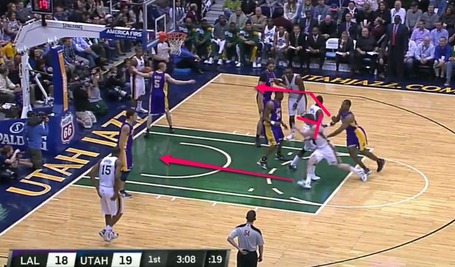 Gordon cuts hard past the screen, dragging Metta World Peace into Howard's area. Now, Kobe Bryant is caught in no-mans land here: he either has to switch to Hayward and try and defend a man with momentum moving to the hoop, or fight through the screen and stay with Howard. He chooses to stay with Josh, perhaps thinking that Luke Walton would drop off Favors and help... which he doesn't. Watson sees the lack of rotation and inbounds past Blake's poor D - his arms are down and he's watching the right side - and gets the ball to an open Gordon. 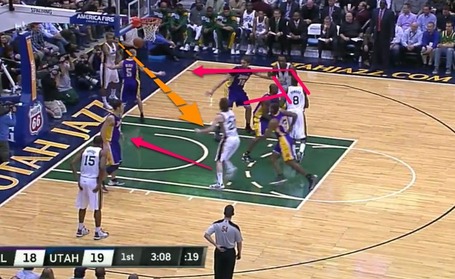 What's most interesting here is what is happening back at the top of the key: Al has moved up to the right elbow, has set a pick and sealed Pau Gasol off, and Howard is moving to cut past the pick. This is the second option here; if Artest and Kobe had rotated then Josh runs a curl off Al's pick for a 15-footer, or a pass into Al posting on Gasol. It's all about options: remember that the Jazz are all about options in their offense. Option 3 is a pass to Favors if Walton helps on the downcut, Gordon isn't open on the curl post-cut and Howard isn't open on the curl. Gordon would move around Favors, collect the ball on the left wing, and look for Favors to either post or set a ball screen. Options.

We all know that G-Time missed the layup, but I took great satisfaction from watching this play: perfect timing, execution and it bamboozled the Laker D. It showed me that under Coach Corbin this year the Jazz are placing the same importance on execution of inbounds plays, and I hope to hear Hubie mention that inbounds plays are the same as they ever were.