Share All sharing options for: Jim Mora on the Utah Jazz: "Playoffs? Playoffs?" - The Downbeat - #664

By now there is a good chance you have read the articles on the Utah Jazz's playoff chances written by Sports Illustrated's Zach Lowe and by the writing heads at ESPN. Lowe wonders aloud if the Jazz are contenders to make the playoffs, admitting he'd be pleasantly surprised if the Jazz did make the playoffs, but mentioning reasons they may not. You can read more about his reasons, but is a really well written piece from an outside perspective. I have to admit that I agree with everything he mentions. A couple of ESPN writers, including John Hollinger discuss why they believe the Jazz won't be able to sustain their winning ways and their reasoning is also sound, although it didn't keep Matt Harpring from twitterally abusing Hollinger yesterday. "Winning will trump all skeptics!"

Twitter me this: Do you believe the Jazz will be able to keep their winning ways? You can call me a bad fan, but I have my doubts. I'm just trying to be practical. But I am thoroughly enjoying the way the team is playing right now. They are playing good basketball and wins are wins and right now the playoff standings say the Jazz are winners. Let's hope it keeps up.

One of the reasons I remain skeptical is because the Jazz have had a pretty easy schedule thus far. I don't think there is any way around that fact. Take a look at the schedules in February and March for instance. 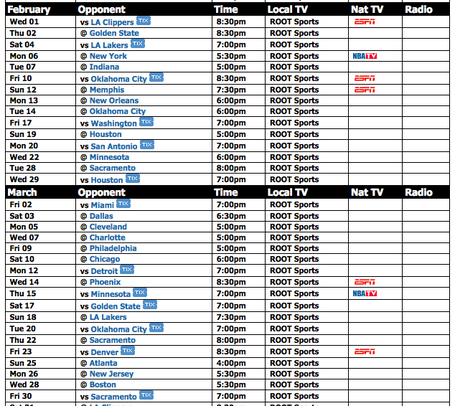 Lots of road games and lots of good teams. I'd love for the Jazz to prove me (and many others) wrong, but I see some losing streaks in the future.

The main reason for the Jazz's success is Paul Millsap's play this year. Millsap isn't only playing like an all-star; he is playing like a superstar. Millsap is currently 7th in the league in PER, a statistical measure developed by Hollinger that compares players' overall offensive value. It is one of the best advanced statistical models that allows players to be compared to one another, in my opinion. Millsap has a PER of 26.01 (an average player scores a 15 and the league leader is Lebron James with 33.74). Before this season Millsap has never finished a season with a PER rating greater than 20. Millsap has improved rebounding and cut his turnovers and increased his usage, or possessions. And he's done all of this while shooting a career low percentage from the free throw line.

Derrick Favors, Enes Kanter and to a degree, Alec Burks have been fantastic off the bench. Earl Watson has been the leader of the second unit. Gordon Hayward is coming along and Raja Bell is looking like a competent starter again. And Al Jefferson has made improvements to his game and has become an improved defender, but like Lowe mentions, Jefferson has been a very similar player offensively to last year. But Paul Millsap has improved his PER by almost 7 points in one season. For reference sakes, 7 points is the difference between Chris Kaman and Dirk Nowitzki offensively. Or Darren Collison and Russell Westbrook. Or Danilo Gallinari and Kevin Durant. If Mllsap can keep this production up...

I feel like Utah Jazz GM Kevin O'Connor has been more open in his interviews lately, but it might just be me. But he said interesting things in his last two interviews, one on The Fan tv station and one on 1320 KFAN yesterday. You can find the video here and the audio to 1320 here.

In the TV interview, O'Connor mentioned a very specific way the Jazz could use the Okur trade exception, by combining it with the rights of a previously drafted European player, say Ante Tomic, to bring back a player essentially for free. If you remember, the Jazz acquired European player Peter Fehse in the Eric Maynor trade. I still think the Jazz are more likely to use their trade exception on draft day this summer, but I thought O'Connor's specific mention of European players was interesting. O'Connor also mentioned that the Jazz could use the trade exception on restricted free agents, if another team signed the free agent and subsequently traded that player to the Jazz.

I don't see Denver helping the Jazz, but a player like Wilson Chandler is a restricted free agent I could live with on the Utah Jazz.

If the Jazz make the playoffs this year, they will be forced to give their own 1st round pick to Minnesota as part of the Al Jefferson trade. For simplification, let's assume that Golden State protects their pick by finishing in the bottom 7 teams. While it would be nice to make the playoffs, it would be hard to lose out on having a 1st round pick in this upcoming draft. Some SLCDunkers have already discussed what I like to call "The Jazz Fan's Dilemma." Today's poll question after the jump: