Share All sharing options for: We’re Flying Edition – The Downbeat #665

The Jazz are flying right now. We started off the season going 1 and 3, where our one lone win (a win without Al Jefferson), was non-uniformly sandwiched between three ugly, ugly, ugly losses. Since the first week of the season the Jazz have won 8 of their last 9 games; the lone loss being an overtime game at home where, despite a large disparity of free throw attempts in the favor of the road team, we had honest chances to win it. There are two major arguments that some people are making online, excuses really, to ‘make it okay’ to disregard our win/loss record. The first is that a) we’ve caught a few teams that were missing key players. And, of course, b) the second is that we’re a very average team by the numbers.

These are nice arguments to make, however they are not without inherent flaws as well. In terms of winning games because we’re less injured than the other team – well, in all the years when the Jazz core depended on Carlos Boozer, Andrei Kirilenko, and Mehmet Okur we’ve had to play a lot of games without some of our major guys as well. I don’t remember the media going easy on us for losing games to healthier teams – when we’d lose to Oklahoma City no one would write in their game recap that "The Thunder are very exciting, and currently on a statistically improbable streak of unusually great health as they have not had a serious injury to a rotation player in over 3 years . . . while that is precisely a Jazz hallmark." It’s easy to wave away our franchise, and not even think we’re worthy of contention when we lose to the Lakers three seasons in a row in the playoffs. Somehow no one waved away the last two times, on account of the Jazz being down TWO STARTERS in both of last two attempts – let alone how the Jazz, in the last attempt, advanced past a healthy Denver Nuggets squad down two starters to GET A CHANCE at the Lakers. If no one stood up for the Jazz being severely shorthanded when we were losing then doing so to disparage our current wins (because the teams we’re facing ARE shorthanded) is, how do you say it . . . oh yeah . . . hypocritical. The media didn’t go easy on the Jazz when we were down starters. The other teams didn’t go easy on us either, pounding us into bad performances. This time around the Jazz are the healthier team, and we’re not going easy on the other team. Yet, this time, the media goes hard on us for having a 9-4 record.

Our very, very average 9-4 record . . . this is the argument in b) up above. Primarily that our scoring differential (for the most part of the season) was negative, while our wins/loss record was suspect. Well, if you discount our first four games (1 win and 3 losses) do you know what our splits are like? Over the entire NBA season (omitting the first week), the Jazz offense scores 98.0 ppg, and our defense only allows 88.8 ppg; which is a scorring differential of +9.2. Scoring 98.0 ppg would put the Jazz at 8th best in the league; and letting the other team score only 88.8 ppg would give the Jazz a rank of 4th stingiest defense in the entire league. The differential of +9.2 would be 3rd best in the entire NBA.

So yeah, when there’s only been 13 games, the first 4 are going to skew the data a bit; and when 3 of the first 4 games were blowout losses – they are going to make our team’s TOTAL rankings way lower than they should have been. At the end of the season the first 4 games, out of 66 total will be a much smaller piece of the pie than the first 4 games, in 13. You can feel free to count out the Jazz, and say bad things about us; you can call us frauds – but right now look at the scoreboard. We’re 9-4, second best in the West. And if you look beyond the first week of the season you can see the numbers show that we’re playing very well right now.

Perhaps we are a horrible team, and perhaps when the schedule tips against us we’ll fall very hard back to earth (I almost count on it). But at least be man enough to admit that we’re playing very well right now, if you can’t admit that we are a good team. If the Jazz continue to get solid contributions from 8 or 9 guys a night they can surpass a lot of expectations. I had the Jazz being under .500 this year. I still feel like that is highly possible. But right now? Now the Jazz are flying.

You know who else is flying right now? Jeremy Evans, that’s who.

Evans is flying so high right now; which is no surprise at all. Reports that he spent part of the lock out being used as a low Earth orbit reusable launch vehicle are, as for this time, still unconfirmed yet undenied.

He is doing it from all over the floor, too – not just around the rim. Yes, according to HoopData.com this season he’s boasting his highest ever career fg% around the rim; but he’s also killing it from all the other spots on the floor. He’s 51.9 fg% from 3’ to 9’ out. He’s 31.6 fg% from 10’ to 15’ out. And he’s 51.0 fg% from 16’ to 23’ feet from the basket. His ratio of shot attempts between "at the rim", "in the paint", "close range", and "midrange" goes at 5 : 2 : 2 : 3. You have to guard him all over the floor, he even averages nearly one three point attempt a game this year, with an eFG% of 37.5% from beyond 23’. He is also the best evidence the scientific community has to support the theory of evolution. If he keeps this type of play up people will have to work nearly twice as hard to make excuses why he shouldn’t be an All-Star in the next few weeks.

Speaking of people working hard, you HAVE TO (not kidding, I will check your browser history to see) read Clint Peterson (@Clintonite33 ) ‘s amazing rebuttal / explanation of how the Jazz have been playing. It’s over at Hardwood Paroxysm, so go there now. (That link, like all my links, opens up in a new window so feel free to click it now!) He has been, often, the lone steading force in our Jazz community – preaching patience. His patience has paid off we all now see the continued positive change in Al Jefferson. Al is not the same guy he was when the season started. And he’s not the same guy he was in Minnesota either. I love his passing. Which Clint and I both see in beyond just simple assist numbers. Right now he’s truly becoming a part of our offensive system. Read this now! Read this now! Read this now!! 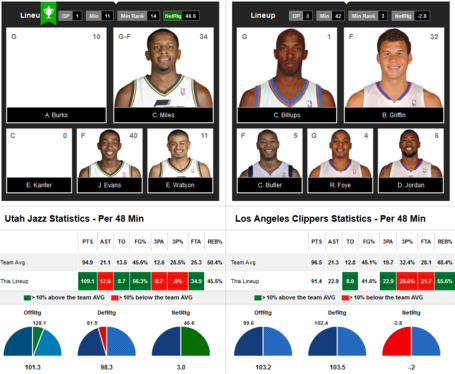