We Are Utah Jazz

Share All sharing options for: We Are Utah Jazz

We have seen it on hashtags, local fans see it on billboards and its all over the ESA.

We Are Utah Jazz

I don't know if the Jazz planned it or if it is a mere coincidence but the slogan for the team this year fits perfectly for the identity of the team this year. Over the last ten games the Jazz have made most of us believers. We have read it many times throughout the last month, its not that we're winning it is HOW we are winning. It seems like playing as a team and not having a superstar is is how we're getting it done. The first games when we were struggling the talk was about who is going to be the star of the team, who is the leader, who will be our captains? Isn't it funny how winning takes care of all:

Once the Jazz learned to play as a team and stopped just standing around watching Al, we began to win. When the players decided that it takes all of them giving their best effort things began to change. David Locke on google + shared the top five moments that changed and defined the season according to the players :

I loved reading this list, not one of the items was about doing something for individual glory, it was all about taking sacrifices for the team.

Team talk continued at shoot around this morning with Paul Millsap

This tweet warmed my heart. If there was any player on our team that could claim to be a star, it would be Mr. Paul Millsap. Yet our favorite 2nd rounder doesn't claim the spotlight, that is the attitude this team needs to succeed.

my tweet prompted a discussion from other fans about their love for this team also : 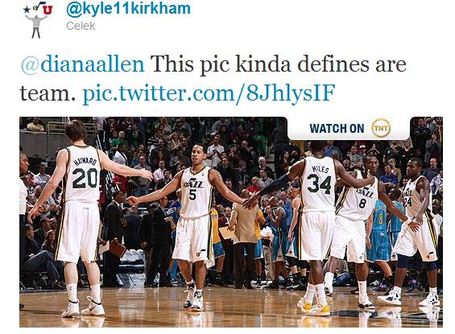 The Jazz have the best record since the new year, they are sitting second in the Western Conference. I don't have numbers to support the change, I will leave that to our number guru, Amar. I do watch the games though and can see the changes. Our team has chemistry, something that was missing for most of last year and the first three games of this year. They actually like playing with each other, they trust each other on both ends of the court. They don't need to depend on one player to carry the load, like Bittermormon tweeted, they are playing like the Detroit team of 2004.

We don't know how long this will last, maybe the brutal February and March schedules will prove to much for our young superstar-less team but for now I am enjoying every moment. After last season we all deserve this wonderful month of Jazz basketball.